A Scratch in Time 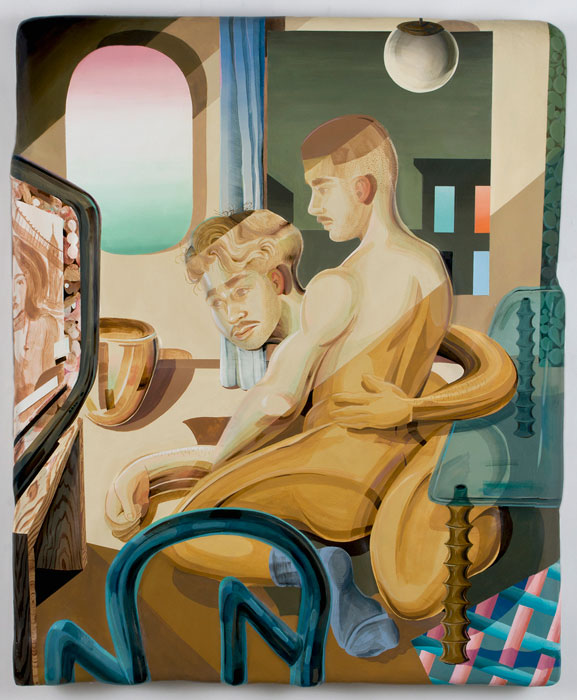 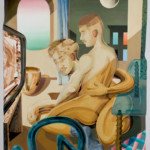 The exhibition borrows its title from Coco Young‘s installation piece, “a Scratch in Time”, 2018. Young’s practice questions the notions of identity and control, often referencing historical and fictional female characters, such as William Shakespeare’s “Ophelia and Mary Magdalene”, as a means for deeper contextualization. Young embraces tension in her materiality, inviting elements of varying lifespans and durability to co-exist in the same piece. Though employing technological elements, Young’s practice is grounded in the natural world. After completion, her works exist uncontrolled, welcoming moments of surprise and randomness.

Also using materiality to arrive at a grander notion is Vaughn Spann. Spann brings three-dimensionality to his canvases, experimenting with fabric, twine, spray paint, oil paint, and paper among other materials to create sculptural paintings. A sense of craftsmanship enters Spann’s practice. Inspired by his upbringing and given local environment at the time, Spann seeks to examine the social context and historical perspective of each work.

Oren Pinhassi plays with materiality to create forms that are at once recognizable and ambiguous. Pinhassi uses sculpture to question deeply held ideologies and habit. His work beckons the viewer to consider their relationship with an object and attached associations. What at first might seem straightforward becomes unfamiliar as you consider the materials and complexity behind Pinhassi’s forms.

Similarly defying categorical restraints is Kyle Vu-Dunn. Vu-Dunn’s work teeters the line between sculpture and painting. Employing the idea that painting does not have to be flat, Vu-Dunn carves sculptural elements into what otherwise would appear to be a two dimensional canvas. Colors pulsate off of the artist’s work, a trait he includes to heighten the sensuality and emotion at play. Vu-Dunn’s works can be read both as allegorical tales and as experiences the artist himself has encountered living as a queer man in the world. Vu-Dunn uses his work to celebrate the often-repressed male sense of sensuality and creates a world where men are allowed to display soft emotion.

Where Vu-Dunn pushes the boundaries of the canvas’s physical limits, Kelly Beeman‘s paintings explore the formal relationship of color and form. Thought-up domestic spaces adorn Beeman’s paintings, where pattern and color create scenes that are both specific and undefined. Beeman’s focal point of each work is an angular, elongated female figure, whose expressionless face and confident gaze evoke the stylization of Modigliani. Contemporary colors combine with a range of historical influences, from German Expressionism to Byzantine archetypes.

In her paintings, Grace Metzler captures a Gothic element prevalent in contemporary rural America with her vignettes of regular, everyday people going about their lives, instilled with an undercurrent of loneliness and gloom that cuts against the rosiest optimism of our country’s aspirational ethos. By illustrating the quotidian in a mundane, muted fashion, Metzler ignores the hectic pace of life today and instead focuses on uncanny moments of interaction.

Grace Metzler (b. 1989, New York) lives and works in Brooklyn, NY. She received an MFA from Hunter College and BFA from Tyler School of Art at Temple University. Metzler recently had a solo exhibition at Half Gallery (New York), and has been included in group exhibitions at Thierry Goldberg Gallery (New York, NY), David & Schweitzer (Brooklyn, NY), Neochrome Gallery (Torino, Italy), and V1 Gallery (Copenhagen, Denmark). She is a 2017 recipient of the Rema Hort Mann Foundation Emerging Artist Grant.

Oren Pinhassi (b. 1985, Tel Aviv, Isreal) lives and works in New York, NY. He received an MFA from Yale University. He recently had solo exhibitions at Edel Assanti (London, UK), Skibum MacArthur (Los Angeles, CA), Ribot Gallery (Milan, Italy) and at the Petach Tikva Museum, Israel. His work has been featured in group shows at David Zwirner (New York, NY) Galerie Eva Meyer (Paris, France), Andrew Rafacz Gallery (Chicago, IL), and Magenta Plains (New York, NY). Pinhassi was a recipient of the Shanadanken Project at Storm King Sculpture Park in 2016 and has been written about in Wallpaper*, Blouin ArtInfo, and The Brooklyn Rail.

Vaughn Spann (b. 1992, Florida) lives and works in Newark, NJ. He received an MFA from Yale University and a BFA from Rutgers State University. He has exhibited at Night Gallery (Los Angeles), Shoot the Lobster (Los Angeles), Fredericks and Freiser (New York), and Jenkins Johnson Gallery (Brooklyn, NY) (solo), among others. His work was featured or written about in The New York Times, Hyperallergic and New American Paintings (cover).

Coco Young (b. 1989, New York) lives and works in New York, NY. She had a solo show at Interstate Projects (Brooklyn, NY) in 2016 and has shown in group exhibitions at The Whitney Museum of American Art (New York), 41 Cooper Gallery (New York), and De School (Amsterdam, NE). Young is currently enrolled as an MFA candidate at Columbia University where she also received a BA in Art History.