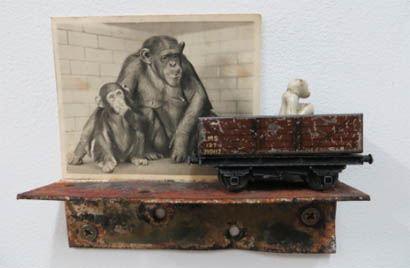 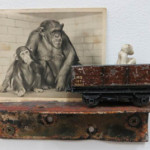 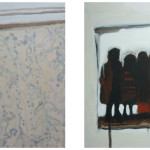 In this era of generation rent, political inertia in affordable house building has caused a psychological shift in the home is where the heart is ideal. A troubling sense of unease now resides behind closed doors. Reflecting on this disorientating dislocation, by picking over treasured knick-knacks, considering family histories, looking forwards at sci-fi solutions or clinging to the wreckage of lost utopias, “Home Time” asks its artists to make responses to the objects which they surround themselves with.

Alex Michon uses broken glass as a metaphor for impermanence, unease and the domestic chaos caused by using her flat as both home and studio. Utilising, furniture, text and discarded dresses she proposes an elegy for the ever-declining belief in and provision of sustainable social housing.

Kate Murdoch is an artist whose work reflects a fascination with the passage of time, the permanence of objects and the fragility of existence. It is human nature to surround ourselves with objects; they provide us with a sense of self and reveal our connections to the wider world. Often loaded with meaning, objects reflect both our internal emotional world and the external image we present to others. From the mundane to the meaningful, they are steeped in social and political history and part of our identity.

Alex Pearl makes mini epic films, video installations, games, photographs, objects, blogs and books with his work nodding toward the structures and images of science fiction and the idea of the artist as evil-genius or crackpot-scientist. For “Home Time” he looks at the futurist visions of Tex Avery and Le Corbusier. Pearl is currently studying for a PhD that looks at a New Materialist take on mechanical breakdown and anthropomorphism.

Corinna Spencer’s work centres on obsessive love, death and mourning, explored through intimate portraits. For “Home Time” Spencer looks back at her own family, who are currently scattered over two countries, and in particular her mother. This dispersed family has led to a sense of impermanence and searching for home, which feeds Spencer’s compulsion to look backwards to a deceptively simple past.