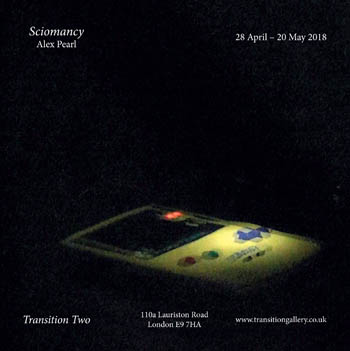 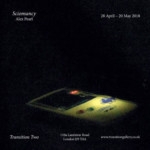 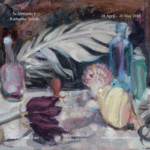 Sciomancy is divination by consulting the shades of the dead. Through different practices these two artists create dialogues with the secret life of things, finding links between the everyday and the unknown, conjuring something extra, something unfathomable.

‘Technology is the concretisation of the visions of shamans and magicians. Everything we use today was accomplished, imagined or dreamed, in ancient times.’ (Pedro Soler, Texto sobre tecnomagia, 2013)

Alex Pearl presents films and sculptures exploring the path between technology and more unstable belief systems such as mediums and ghosts. Much of his work invokes the structures and images of science fiction; the idea of the artist as crackpot-scientist always lurks in the background.

He is in the process of clearing out his studio, a room of dust, stratification and the almost fossilised – old sculpture, film props, unused materials, found objects and broken things, the kipple of the artist piled in a cascading slagheap. The work presented here is an attempt to find meaning in, or give life to, these lost objects. Using the technological magic trick Pepper’s Ghost and other electronic sleights of hand, things are dreamed into impermanent existence.

‘I have found the warm caves in the woods,
filled them with skillets, carvings, shelves,
closets, silks, innumerable goods;
fixed the suppers for the worms and the elves:
whining, rearranging the disaligned.
A woman like that is misunderstood.
I have been her kind.’ (Anne Sexton, Her Kind)

Katherine Tulloh has made a series of oil paintings of little bottles found on the streets of Hackney. Emptied of their original alcoholic contents they led her to think of other sorts of spirits, becoming witch bottles – magical or countermagical devices – potion vials, drunk at midnight on a street corner, dropped after some transformative ritual has taken place. They cohabit with shells, feathers and other organic fragments in the disarray of the witch’s workbench, arranged like a cast of characters on shelves and in cupboards. The paintings animate, expand the scale and release the concentrated colours of these receptacles of the witch’s skill and wisdom, the subversive power of her otherness as celebrated in Anne Sexton’s poem.

Both Tulloh and Pearl engage with the notion of the artist as an outsider – the witch in her cottage or the inventor in the lab – organising their own reality, reconfiguring experience, making us see things in a different light.