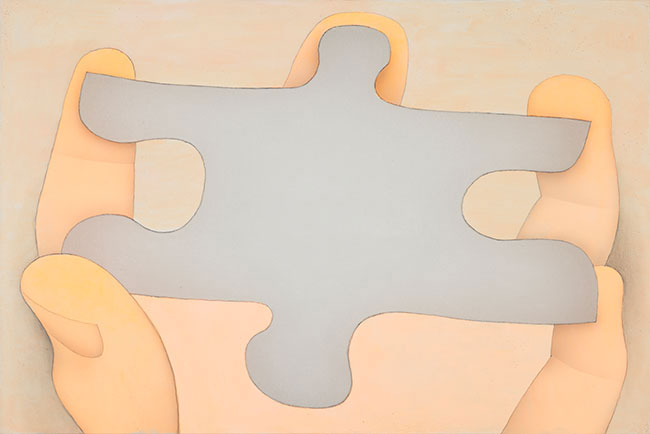 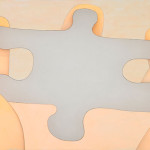 In the Project Space, Luis De Jesus Los Angeles is pleased to present an exhibition of intimate new paintings by Brooklyn-based Alexi Worth. This is Worth’s first exhibition in Los Angeles.

These new paintings offer what Roberta Smith, writing about Worth in “The New York Times”, called “Realism with Benefits.” At once playful, meditative, and austere, Worth achieves a refreshed illusionism. Using nylon mesh as a surface, Worth employs a peculiar hybrid of mechanical and freehand effects by brushing and spraying acrylic paint over hand-cut stencils.

The result is a semi-transparent, yet additive photogram effect of shadowy contours. The edge of each shape has a print-like delicacy. Shapes are simplified into their most essential forms, closely cropped, and further layered, lending an optical illusion of depth. At the same time, Worth’s surface is unusual. Flat and anti-painterly, the mesh surface is nevertheless subtly discontinuous. In each image, brightly sealed areas alternate with dimmer, openmesh halftone passages where the gallery wall is visible. The painting becomes something like a two-dimensional vitrine.

As a meta-narrative of the subject, Worth explores the gestures of reaching and grasping, or of things to be grasped. Here, the viewer is engaged, their role as a spectator activated by a first-person narrative. Two glasses of wine are lifted in unison, the perspective of the viewer hinged to the foregrounded shape of a glass to be sipped. In discussion with Alex Nagel, Worth describes, “As infants, being able to reach out and hold things is how we learn to ‘see’ them. The hand is part of the eye.”

One painting, “Fig Leaf”, shrewdly plays with basic differences between surface and depth, concealment and transparency. As critic Blake Gopnik wrote on Artnet, “Worth’s leaf stretches out to touch all four sides of his stretcher, becoming the artist’s entire canvas but also seeming to cover it up.” Meanwhile, the hand in the picture “both places the leaf and removes it.” This, Gopnik writes, “is the kind of ambivalence and coyness that all painters ought to be coping with in our post-painterly age.”

In “Quadruple Handle”, for instance, we recognize the format of a standard steel and glass entry door, as if we were about to enter a lobby or store. The composition is simple and iconic, connected to the “push/pull” idiom of 20th-century abstraction, yet it is clearly drawn from everyday experience. On either side of the bright D-shaped handles, green mesh areas read as both fiction (an interior with its black welcome mat) and plain fact (the physical inside of the painting). The image is an invitation, a promise of access. But its promise is only metaphorical.

Alexi Worth received his BA at the Yale School of Art and his MFA at Boston University. He has received awards from the Guggenheim Foundation, the Tiffany Foundation, and the New England Foundation for the Arts. Worth lives and works in Brooklyn, NY with his wife, the architect Erika Belsey, and their two boys.