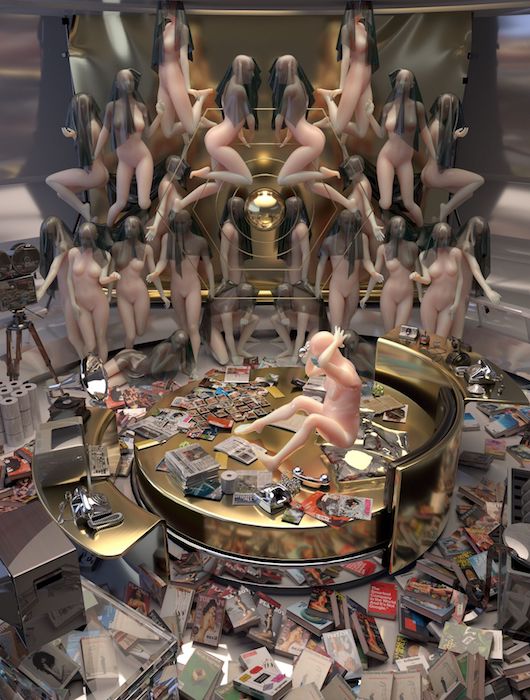 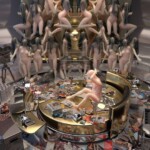 Eli Klein Gallery is proud to present “Alienation?” – a group exhibition of 8 Chinese contemporary artists currently residing in New York, and features 16 works completed in a multitude of mediums including painting, video, photography, and sculpture. Whereas direct references to social phenomena tend to rise and fade quickly, it is the ideas and rules we extrapolate and derive from these events that actually guide mankind towards the future. “Alienation?” invites its audience to inquire beneath what lies on the surface, whether it’s a pandemic or social justice movements, to investigate the relationship between individuals and what they have created.

Regardless of its controversial reputation in the West, Karl Marx’s theory is, for some, considered to be more relevant than ever. Marx first defined the term “alienation” in 1844, pointing out that the working class will first be alienated from what they produce, then the capitalists, and then the society in general. If we look at the process of labor-alienation from the standpoint of an artist who has constructed a product that has become a valued work of art, does the process of alienation still persist? Do Chinese artists living in America experience a higher degree of alienation? Or maybe the exercise of applying art as a product is flawed at the very beginning?

With his long term project “Assembly Line,” Li Xiaofei has been on the very frontier as he has filmed over 280 factories all over the world. His milestone video work “I Am the People_2” is an amalgamation of all parts that he has tirelessly gathered over the past 10 years. Different from Li Xiaofei’s calm and observing perspective, the other video work in the exhibition, “Where Did Macy Go?” finished during the lock-down by the animation artist Wu Ziyang, offers an abundance of information, reminiscent of the digital-dominated world in which we are living today. The conflict between our eagerness to stay connected and our reluctance to be controlled by information-providers portrays the modern-day paradox faced by each individual.

The two photographers in the exhibition, Shen Wei and Zhao Jiawei, each incorporated himself as part of the object, albeit in an unconventional self-portraiture way. In Shen’s “Self-portrait (Burn),” the part of his body which had indeed been burnt from an automobile accident distances itself from Shen’s body to uphold the qualities of an object (the fruits). Zhao Jiawei masterfully creates a hypothetical “third space” in between the viewer and the work by literally reaching into his photos with his arms in one instance and with himself (masked) in another.

The uniqueness in Shen Chen‘s painting stems from repetition of a single gesture of brush rolling, which he has engaged in tens of thousands of times. Shen Chen and his paintings melt into a whole, his works injected with his very soul. He once claimed sarcastically, “I’m a boring man doing a boring job day in and day out.” On the other hand, Feng Lianghong, who moved to New York in the 90s, doesn’t hide the influence of western masters such as Cy Twombly and Brice Marden on his own work. He unleashes his ultimate individuality through abstract paintings following the formalities that had been created by preceding masters.

Wu Yuren appropriated two blocks of granite from the pavement on Wall Street and turned them into liquid dispensers, but only ones that cannot be pressed and won’t dispense, thus raising the question: maybe the process of alienation between producers and products are bilateral? Or referencing Martin Heidegger, when the thing is deprived of its functional essence, or the “thingness,” how is it perceived?

Li Shan is regarded as one of the most important artists in the domain of BioArt. His two “Bio Inquiry” works were executed as if he were a painter living in our organs and vessels when he painted “en plein air” on a cell level. However, these insights never solely belong to the biology world – the microcosm – they are, by all means, manifestations of human society – the macrocosm.

Eli Klein Gallery is open to the public for a contactless visit by appointment.

All visitors are required to wear a mask and to keep a 6 feet distance from all gallery staff. Groups are limited to 4 people. We ask that visitors please notify the gallery if someone in your group falls ill within one week of the visit.