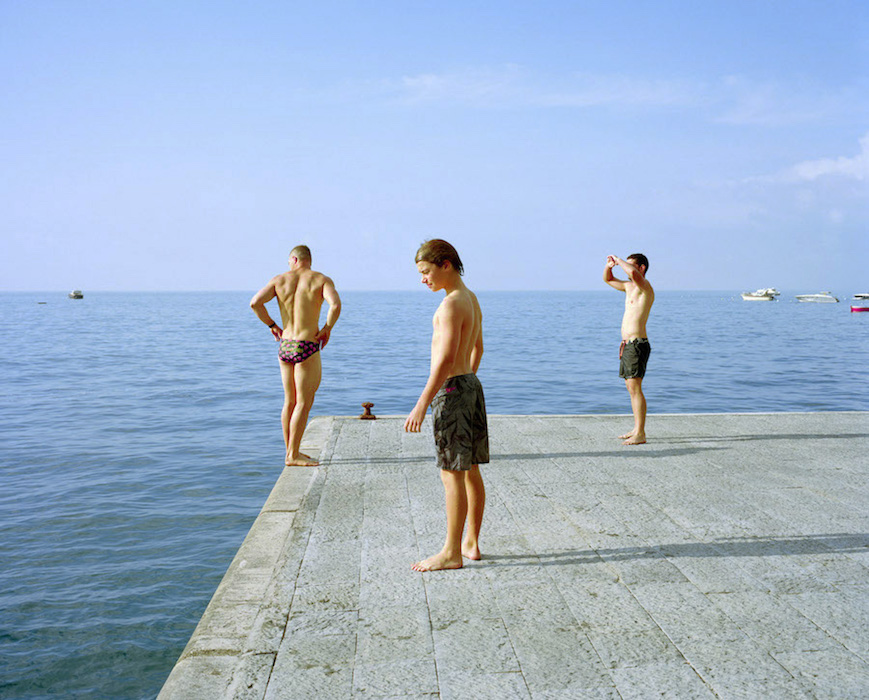 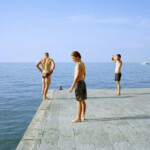 Gitterman Gallery is pleased to present “Suddenly”, an exhibition of new work by Allen Frame made by the artist during a year-long residency at the American Academy in Rome.

The exhibition consists of new color photographs from Italy: figures in outdoor settings in Rome, Positano, Polignano a Vito, Argentario, and Capalbio, as well as two multi-piece works that juxtapose anonymous found photographs with Frame’s own images, expanding the narrative context while highlighting the individually-framed vernacular pictures.

The title piece “Suddenly” consists of 5 new black and white portraits, presented with 2 anonymous vintage photos Frame found in the flea market in Rome of one middle-aged man, posed on the street and peering from a balcony. The group of images, presented in a linear sequence, is inspired by Tennessee Williams’ 1958 play “Suddenly Last Summer”, which was adapted into the 1959 film with Elizabeth Taylor, Montgomery Clift, and Katharine Hepburn. In the story, a gay poet from New Orleans is traveling in Europe with his beautiful younger female cousin, whom he uses as bait to attract the men he desires.

In “Suddenly”, Allen Frame explores the chilling coexistence of privileged refinement and the malevolent effects of repressed sexuality. In Tennessee Williams’ play, the offstage, remembered character Sebastian Venable becomes gradually unhinged, and finally, is cannibalized by starving children on the streets of a Spanish beach town. Frame has worked with Italian photographer and photo book designer Michela Palermo to produce a zine that includes photographs from the piece, a page from the Williams playscript, and an original poem by the artist.

The other multi-photo piece in the exhibition is “Giuseppe”, a salon-style grouping of 40 small snapshots, in color and black and white, from the 1960’s of a handsome Italian youth named Giuseppe, who is pictured on the beach, in the sea, in boats and on land. In this constellation of found images, Frame intersperses 8 of his own color photographs of a young man and woman that he was traveling with in similar locations, creating a link between the present and the past and animating the appropriated archive with his own seductive images. The artist counts two films as particular inspiration, Rene Clement’s 1960 film “Plein Soleil”, (released as “Purple Noon” in English), with Alain Delon, based on the Patricia Highsmith novel “The Talented Mr. Ripley”, and Godard’s “Le Mepris” (Contempt), shot at Villa Malaparte on Capri, with Brigitte Bardot, Michel Piccoli, Fritz Lang, and Jack Palance, another French film set in Southern Italy in the same period (1962) and based on an Alberto Moravia novel.

Born in Mississippi in 1951, Allen Frame grew up in the Delta town of Greenville, known for its literary culture and progressive Pulitzer Prize-winning newspaper. Shelby Foote and Walker Percy had gone to his high school and Southern writers like William Faulkner, Tennessee Williams, and Carson McCullers, were strong influences on him. After graduating from Harvard University in 1974, Frame moved to New York in 1977. During the early 1980s, Frame, already a photographer, was also part of an experimental theater scene, working with Bill Rice, Sue Williams, Gary Indiana, Taylor Mead, Cookie Mueller, John Heys, Frank Franca, Rosemary Moore, Butch Walker, Nan Goldin, Suzanne Fletcher, Richard Elovich, Kirsten Bates, Poty Oliveira, and Steve Buscemi, and directing a play based on the writings of David Wojnarowicz. He spent two years in London writing about experimental theater and directed and co-wrote the play “Call Grandad” with Bertie Marshall. Recently, he has completed a full-length play called “Dogs Barking in the Deep South”. He is an Executive Producer of the feature film “Four”, directed by Joshua Sanchez and starring Wendell Pierce.

His book “Detour”, a compilation of his photographs from the 1990s, was published by Kehrer Verlag Heidelberg in 2001. He teaches photography at the School of Visual Arts, Pratt Institute, and the International Center for Photography, and he has been teaching photography workshops in Mexico since the late 1990s. He has also taught photography workshops in Russia four times, and has an artist’s residency through CEC Artslink in St. Petersburg and Ekaterinburg in May. He often writes about photography and has written an essay on Alvin Baltrop which will appear in the catalogue for the Bronx Museum’s exhibition of Baltrop’s work in August. He advises the estate of Darrel Ellis, whose work is being presented this year for the first time in 15 years by Osmos.