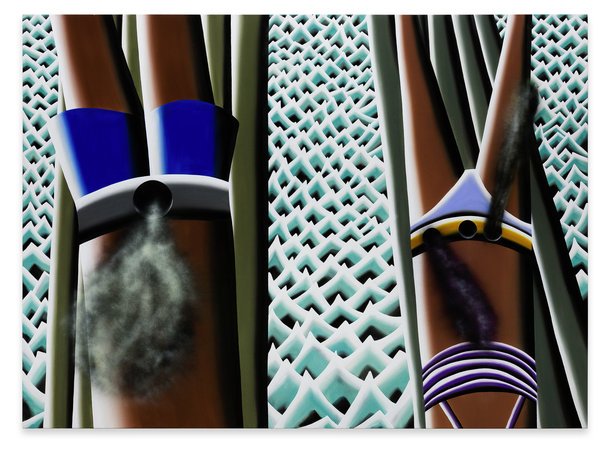 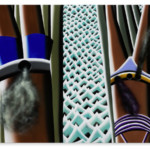 For this exhibition, Schulze has created a cohesive body of figurative paintings, each of which depicts, in the artist’s abstrusely playful visual language, a person on a beach holiday. The characters, while loosely recognizable as such, seem eerily mechanical: the figures are all cut off at the head, their bodies rendered as shimmering, cylindrical tubes; their distinctly inorganic appearance is further emphasized by dense, spewing grey exhaust that emits from a hole around the midriff in each work. As is typical of Schulze’s practice, his warm, cartoonish rendering provides a thin mask for a series of mysterious, frequently sinister themes and motifs; the paintings are bizarre, contradictory depictions of quotidian subjects, containing equal measures of affection and menace.

Schulze employs an oddball sense of humor – rife with visual puns and exaggerated stylization – to allow the viewer to access his work’s quietly foreboding undertones, as well as the darkness he perceives in the day-to-day of modern life. Within this show, the phrase “blowing off steam” is made literal by the streams of pollution that emit from the beach-going figures. The fantasy of a yearlong vacation, as suggested by the exhibition’s title, provides a respite from the mechanized drudgery of petit-bourgeois life. The figures’ odd, machine-like physiques and faceless anonymity further suggest this kind of dehumanization, the treatment of people as commodities under capitalism.

While Schulze’s first exhibition at Team Gallery in 2011 was an immersive installation – consisting of works on canvas, situated among found objects, furniture of his own design and painted walls and floors – he limited each of his following two shows to an exclusive motif – windows in 2013 and automobiles in 2014. In creating within such constraints, as he has done here once again, the artist allows his prodigious visual imagination and his idiosyncratic, confident and highly skillful treatment of paint to occupy center stage. Aspects of his installation practice remain, however: here, the gallery walls are painted a stark, almost aggressive shade of blue. The color, in this context, becomes that of an oppressively idealized ocean or sky.

There is a great deal of visual variation in the paintings, especially considering the seeming unanimity of their subject matter. Schulze’s vacationers are adorned with diverse articles of vividly patterned clothing. In certain works, the figure takes up the whole of the plane, while others’ characters are aslant, floating on a striped towel or bed of sand. The artist also plays with the arrangement and shapes of his canvases; by placing them at alternating heights, he suggests a scene, in which some of the figures have gone deeper into the ocean water than others. The proportions of the works vary as well: a square canvas contains an overweight “mother” figure, while an elongated one portrays a tall, slender “father.”

Schulze was born in Hannover in 1955 and has been exhibiting his work since 1981 – his longstanding relationship with gallerist Monika Sprüth beginning in 1983. Schulze’s work has been exhibited at museums internationally including the Museum of Modern Art in New York, the Tate Museum in London, the Kölnischer Kunstverein, the Solomon R. Guggenheim Museum, Kunstsaele in Berlin and at the Kunstverein and the Sammlung Falckenberg, both in Hamburg. A recent retrospective toured three venues: Villa Merkel in Neckel, The Shirn Kunsthalle in Frankfurt, both in Germany, and the Kunstmuseum St. Gallen in Switzerland.

This is Schulze’s fourth exhibition with Team Gallery.