Andrew Salgado – The Fool Makes a Joke at Midnight 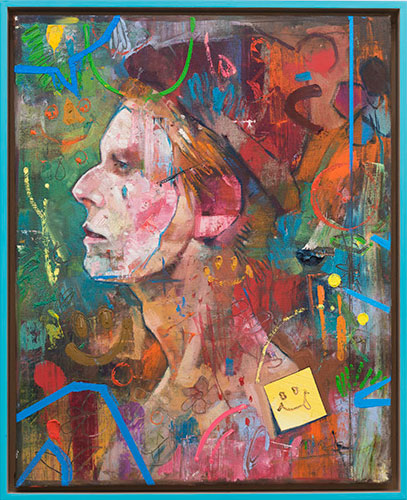 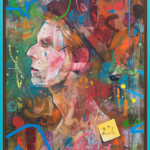 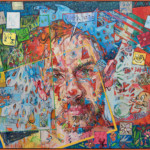 London-based artist Andrew Salgado returns to New York for his solo exhibition, entitled, “The Fool Makes a Joke at Midnight”. This exhibition will be hosted by Beers Gallery at Thierry Goldberg in the Lower East Side.

The 33-year old Salgado has made an international name for himself in the past few years by spear-heading a certain bold, gestural large-scale figuration in the aftermath of a homophobic hate-crime victimisation: a sort of ‘young, gay, Generation Y Jenny Saville’. However, Salgado has since shirked both that classification and that style in recent years, and so challenging himself and his viewer with a new kind of figurative painting: wherein the figure has become secondary to painterly flourishes including heavily worked surface textures of a highly abstract tendency, resulting in a true questioning of what ‘figurative painting’ means in the 21st century. These aren’t portraits in the straightforward sense; each is riddled with a complex disarray of external stimuli, from comedic overlays, to transposed alphabets, grids, and trompe-l’oeil Post-It Notes made to look like memos stuck to finished paintings. Salgado has a sense of humor, and we are left trying to figure out how to decipher the jokes at play.

In this particular body of work, the lead image depicting David Bowie in carnival mask, Salgado seems to address the tragicomic nature of humanity. Salgado, himself half-Mexican, also makes his most poignant and topical political statement to date, with a title piece, ‘The Fool’ in which the artist makes-up Donald Trump as a clown, complete with a reddened nose and oversize polka-dot bowtie. It is a strikingly critical portrayal, particularly given the fact that Salgado paints no less than five other clowns, but each of these in a compassionate light. Throughout the paintings, a type of carnival plays out like a comedy of errors. The works themselves are installed in a gallery space transformed to resemble the aftermath of a circus show: confetti lines the gallery floor, orange and white striped walls, and a carnivalesque series of wall paintings atop which sit the paintings. Throughout, Salgado pokes fun at human nature in a very self-aware and whimsical way forcing the viewer to reconsider and what it means to be human.

Andrew Salgado (b.1982, Canada) is one of the most promising young figurative painters at work today. Saatchi Art calls him “one to invest in today”; critic Edward Lucie Smith states he is a “dazzlingly skillful advocate [for painting]”; Tony Godfrey (author of Phaidon’s “Painting Today”) calls him an “exciting artist with a particular vision”; and even London’s “Evening Standard” has labeled him a “rising star”. He is featured in “100 Painters of Tomorrow”, published by Thames & Hudson (2014); is subject of a 2015 documentary, “Storytelling” (www.storytellingfilm.com); in 2016 the first monograph of Andrew’s work will be released to commemorate ten years of his professional practice. He has been featured in international press, including Artsy and Artnet, Canada’s national newspaper The Globe and Mail, The Independent, The Evening Standard, METRO, and more. He frequently donates to charitable associations, including Terrence Higgins Trust (THT) and MacMillan Cancer Support. Most recently, in March 2016, his most recent donation to THT (a painting measuring 71 x 81cm) went at auction at Christie’s for £ 16,000 ($23,000 USD).