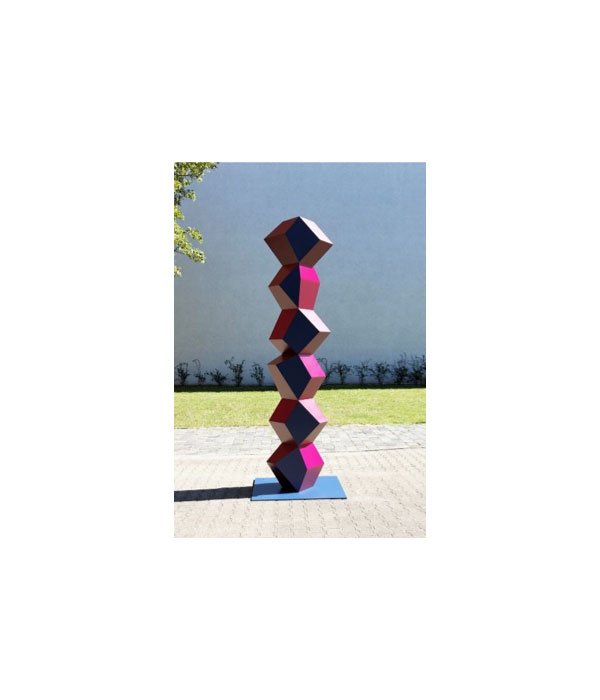 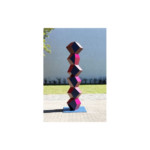 Simon Lee Gallery is proud to present an exhibition of new sculptures by acclaimed artist Angela Bulloch. “One way conversation…” is a continuation of Bulloch’s latest body of work presented last year in “Considering Dynamics and The Forms of Chaos” at the Sharjah Art Museum, UAE and “L’ALMANACH 16” at the Le Consortium Dijon, France. Formed in steel and MDF, the stacked columns of polyhedra have a stylized geometry and manufactured surface sheen that alludes to minimalism and technology. Often apparent in Bulloch’s installations where technology mediates interaction with the work, is her interest in cybernetics, fundamental themes of biological, social and technological systems, and the integration of the human subject with technology.

Totemic and quasi-minimalistic, the idiosyncratic physical geometry of the stacks are suggestive of the anthropomorphic qualities we subconsciously attribute to inanimate objects, creating an intriguing paradox in the nuanced interrelation between elements of the human and non-living world. Like the human condition changing through the development of new interfaces continuously taking on a more traceable volume as an immaterial entity, these forms transgress both digital and physical space.

Conceived and designed within a digital imaging program, the reductive geometric forms of the sculptures have a retro-futurity, borne of the digital realm yet recalling the classical Modernism of Brancusi’s “Endless Columns”. The rhythmic structure of these rhomboid components explore the relationship between form, color, repetition and the expressive possibilities of object and space. Against a backdrop of large wall paintings, the flat planes and angles of each sculpture appear to animate as one moves around them, creating a disorienting illusion of shifts between two and three dimensions; resembling an animated illusion brought forth into reality from a simulated world. As with other works in Bulloch’s corpus, this playful optical effect belies a complexity; the sculptures are essentially generated by perfect equations, their flattening out into patterned surface points toward their origins as endlessly replicable simulations of depth and volume. This slippage between the real and the virtual is perhaps melancholic, invoking an idealised space beyond our apprehension.