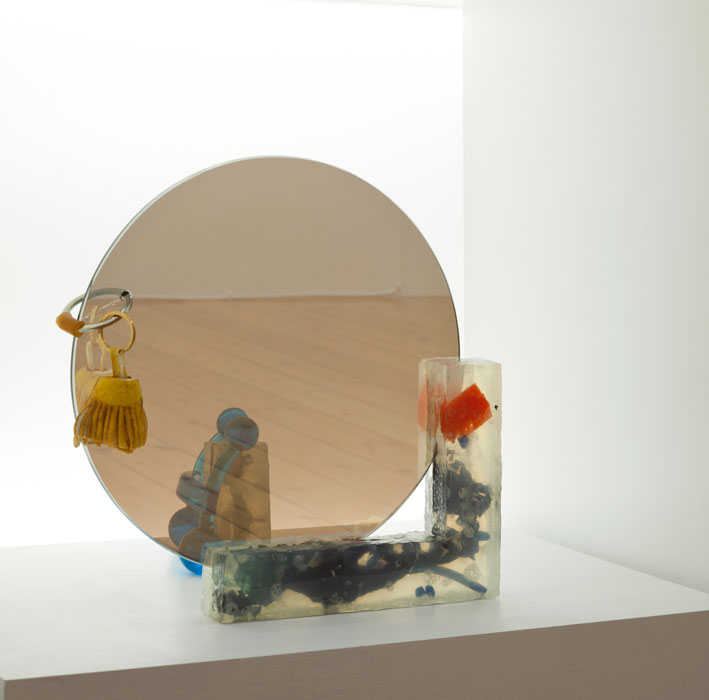 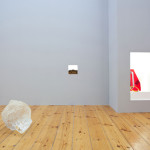 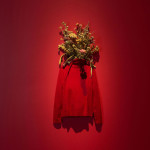 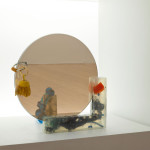 What does forgetting look like? Smell like? The whole of Anicka Yi’s exhibition “7,070,430K of Digital Spit” takes the attempt to forget not so much as a subject or theme, but as an aesthetic operation. “7,070,430K of Digital Spit” is a coda to Yi’s last few years of intense artistic production. That production was often built from perishable substances – freeze-dried shrimp or recalled powdered milk, monosodium glutamate crystals or snail excretions – which testify as much to her sense of techno-sensual chemical experimentation as to the psychological charge (desire, longing, or loss) she imbues things with.

“Denial, Divorce, Death”: these were the ominous titles of Yi’s past trilogy of shows, each one confronting the pursuit of “the forensics of loss and separation,” as she refers to it, which was often cathected through transmuted forms and decaying organic matter. She returns to that past as if to exorcise it. She started by devising a scent to evoke exactly that ineffable process she was seeking: forgetting. She approached the design of the smell from the perspective of the absence of memory or the amniotic sac where a fetus will have its first sensation of smell and then threw into the narrative visions of an Alzheimer’s patient in the hospital surrounded by the metallic, sterile smells of hospital beds, medication, and despair. As she recounts it, “The smell of forgetting is also an imagined apocalyptic end when all memory is eradicated.” It is, in other words, the death of history.

That scent was devised by Yi in collaboration with a French perfumer. Named “Aliens and Alzheimer’s”, it imbues every page of Yi’s Kunsthalle Basel artwork-as-publication. It also wafts through the exhibition as a copy of that book turns, rotisserie style, over an open flame. It was a renegade artistic gesture on Yi’s part to take her very first monograph, and reprint its as “7,070,430K of Digital Spit, A Memoir” on handmade paper impregnated with her newly concocted scent. She invites you to literally burn her book after reading it, thereby releasing the embedded fragrance even as you destroy the contents of this first overview of Yi’s production. What better way to erase the memory of a past oeuvre?

But if memory is to be truly eradicated, one must also confront it physically and dissect it materially. “7,070,430K of Digital Spit”, the exhibition, is an attempt at that. Yi sought to reckon with the last five years, her production since 2010, and the five past shows that featured them. These are now projected across and exorcised within Kunsthalle Basel. Even arriving at a title for the show was a kind of numerological voodoo: she multiplied the title of one of her very first works from 2010, “235,681K of Digital Spit” (a transparent PVC and leather Longchamps ladies’ handbag filled with hair gel and a cow’s stomach), with the sum of five (past years) times five (past shows) plus five (Kunsthalle Basel spaces).

The exhibition is comprised of entirely new works but each bears a slight resemblance to or makes a sly reference to a previous piece, as if they were created from the hazy memory of past work. Her show opens with a trio of transparent, inflatable pods, “Maybe She’s Born with It, ALZ/AZN”, and Lapidary Tea Slave (all 2015). At the center of each sits a resin-fixed bouquet of thousands of tempura-fried flowers. The pods harken back to Yi’s “Skype Sweater” (2010), the grounded, inflated parachute that appeared in one of her very first exhibitions. She spoke of the work (see how much the description fits her pods now) as a “stomach, lung, bladder, asthmatic, wheezing … tied into little anuses, life-support.” Here they are filled with Mylar, pigment, and carton boxes, recurrent materials in her work; they also evoke the tempura-battered and then deep-fried flowers of previous works like Sister (2011) where the romantic connotations of floral arrangements meet the abject as pretty organic matter becomes greasy, decayed, and progressively pungent.

Room 2 has its walls inset with new resin-soap sculptures; delicately sitting as similar works did in her 2013 exhibition “Denial”. The living, transmuting, bacteria-lined “paintings” near them are contaminated winks toward the artist’s most recent 2015 exhibition, “You Can Call Me F”, where she germinated a vast and violently bacteriological tableau.

Room 3 hosts “The Last Diamond” (2015), twin dryer doors embedded in the wall. Open the door, lower your head into the black void behind, and take in notes of forgetting (via diffusers emitting Yi’s “Aliens and Alzheimer’s” scent), just as Yi’s previous work “Washing Away of Wrongs” (2014) did with an altogether different olfactory scent.

Room 4 includes the artist’s three artificial leather sculptures, “Of All Things Orange or Macedonian Wine”, “Apache Helicopter Traffic”, and “Middle Earth Medical” (all 2015), their peculiar, translucent skins made from Yi’s home-grown fermentation of Kombucha yeast and bacteria. They are splayed and hung from metal lab stands near “Odor in the Court” (2015) a white-tiled “oven” built into the wall so that it almost becomes part of the architecture. It recalls, in miniature form, the strangely antiseptic “Auras, Orgasms and Nervous Peaches” (2011), with its room of sterile white tiles. Inside the oven, Yi’s publication is skewered on a spit and rotating over a flame, taunting but never actually touching the fire while resin-dipped freeze-dried shrimp cling to the oven’s outer wall.

Room 5 hosts Plexiglas containers filled with clear ultrasonic gel and various other additions by the artist; they sit like small, open coffins, much as her cardboard and tempura flower-filled open-topped containers had in her contribution to the 2013 group show “Some End of Things”.

It’s not that any of Yi’s new works precisely replicate or exactly resemble the earlier works they evoke; and it is not that they function or signal in the same ways. Indeed, nothing is repeated and nothing is the same. But just as memory warps, resizes, and reshapes things in the haze of remembrance, so too are Yi’s new versions like objects seen in the rearview mirror of her consciousness – some closer, some farther away, some larger, some smaller, some materially different.

“The alchemical concoctions that Yi produces,” Johanna Burton has written in Yi’s catalogue, “complicate divisions between the natural and the artificial, the intellectual and the corporeal, the analytic and the affectual.” It is precisely this alchemy, rooted in an assault on the senses that has consistently driven Yi’s keenly disruptive, feminist, and brilliantly contaminatory aesthetic logic. But if this logic has guided the artist from the start, here she one-ups all that, asking us to both disremember her past by confusing it with eerily similar but different new works and to also literally destroy the very commemoration of what she has done to date and willingly participate in the slow burn of historical eradication.

The exhibition and the specially fragranced artwork-as-publication “7,070,430K of Digital Spit, A Memoir” accompanying the exhibition are co-produced with the Fondation d’entreprise Galeries Lafayette and generously supported by the Gaia Art Foundation, Roldenfund, and 47 Canal.