Anj Smith – Phosphor on the Palms 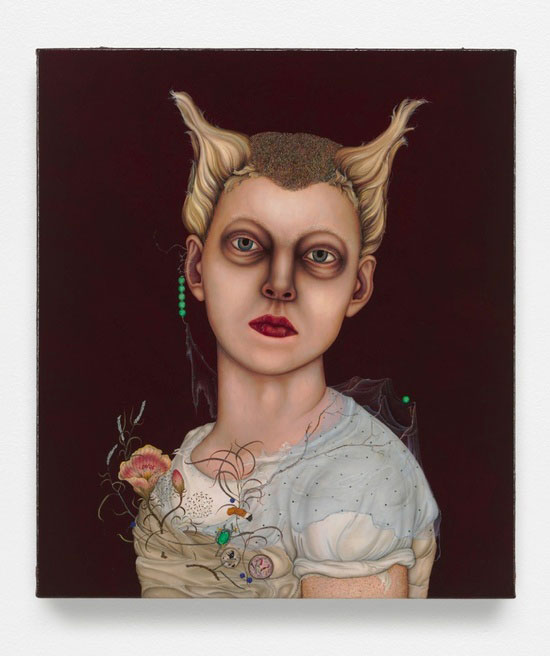 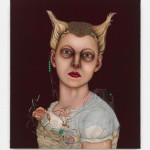 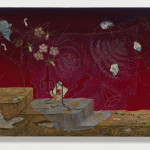 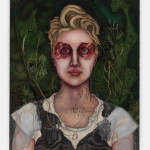 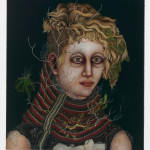 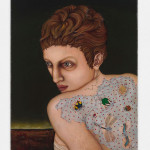 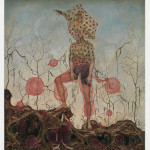 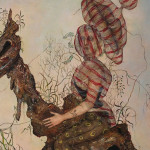 Hauser & Wirth presents a new series of paintings by Anj Smith, her first solo show in London since 2011. Smith has devoted three years to producing this body of work, unveiled here for the first time. Rich in detail, colour and texture, the paintings draw on a diverse range of sources. Psychological states, nature, fashion subcultures and the history of painting are just a few of the layered references operating in these works.

‘Phosphor on the Palms’ is characterised by its exploration of the liminal. The exhibition’s title alludes to the poem ‘Fabliau of Florida’ by Wallace Stevens (1879 – 1955), in which natural elements morph into new configurations. Smith writes: ‘Difficulties in identifying and separating out phenomena aren’t artificially simplified but embraced in all their complexities. Thresholds are hard to determine; clouds in the sky are indistinguishable from the scum washed up with the surf’. These paintings explore shifting boundaries and disintegration, encompassing death and desire, sexuality and language.

Smith collapses traditional definitions of portraiture, landscape and still life, allowing elements of each to coexist simultaneously. In a group that Smith terms ‘museum paintings’, she creates ‘portraits’ in which the sitter is not depicted, but their presence is suggested by arranged objects. Painted in the same register, disparate fragments coalesce to form a constructed identity. In ‘Night Life Galaxy’ (2013), a broken headphone, a cigarette butt and beads from a gemstone necklace are shown against a backdrop of delicately embroidered gossamer suspended in the air, with a constellation of shapes and symbols ensnared within its threads. A cross-section of the painting exposes abysses filled with miniature skulls.

In her portraits, Smith uses the figure as a device on which to hang a wider exploration into identity and social mores. In ‘Cammo’ (2015), the figure stares out at the viewer from behind heavily-tinted aviators. Its Adam’s apple is coupled with smears of different lip-glosses to confound conventional gender designations. Smith uses this androgynous figure to navigate ideas of ambiguity, anxiety and alienation. Within these works, she acknowledges how clothing is used as a tool to project a certain identity. ‘Rings Around the Moon’ (2015) features a collar derived from a couture Alexander McQueen jacket, operating as both armour and costume. Reflecting a punk aesthetic, the figure’s hair is styled with an undercut and safety pins are embedded in its clothing.

Botanical and animal imagery permeates the paintings. A spiky floral wreath – a ‘matinée necklace’ – adorns the neck of one figure, its intertwining branches and wilting petals recall a crown of thorns. ‘The Re-Wilding’ (2014) wears an ethereal chiffon cape across its back, evoking an iridescent dew-laced spider’s web, with embedded insects resembling brightly coloured jewelry. Nothing included is imagined; Smith borrows directly from nature, employing its subtle mysteries for her own purposes. A leaf-tailed gecko mimics the forest floor and a flowering plant reveals a parrot perched in its centre in place of a stamen. In ‘Elimination of a Picture’ (2015), the interlocking keratin scales of an atavistic pangolin are meticulously depicted, reflecting a tiny abstract kaleidoscopic landscape. Worn as part of the ensemble, the scaled creature hints at the intersection between defence and vulnerability.

Smith’s paintings feature uncanny interventions, which only emerge upon close inspection. An extravagant headdress in one portrait is deceptive; it is composed of curled rodents, their heavily embellished eyes gleaming red and their tales morphing into electric blue pom-poms. In ‘The Excreted’ (2014), heavy impasto slick reveals itself to be a troop of monkeys, trapped beneath the earth, whilst above ground, rendered in loose washes of pink, the apparition of a monkey clambers uphill.

Smith talks about how her work takes on the subject of painting, saying: ‘there’s something about its constantly evolving instability that fascinates me… the precarious fragility of it. Because painting’s death has been so trumpeted, and yet it limps on widely to seduce – it’s another reason why it’s an apt medium for working now.’ Smith’s enigmatic paintings owe as much to seventeenth-century Dutch vanities works and Mughal miniatures as they do to contemporary painting and the intricate complexities and mystical inspirations of Outsider Art, particularly the work of Adolf Wölfli and Richard Dadd. In Smith’s luscious visual language she embraces the instability of meaning and the complexity of its representation, which is at the heart of this new body of work.