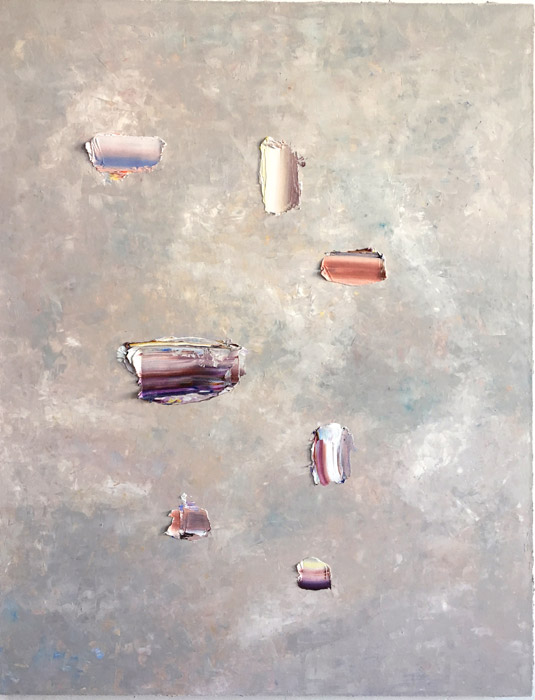 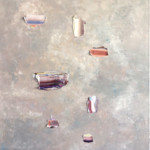 Since her successful inaugural exhibition in April 2016, Anna Leonhardt has continued her investigation into the unsettled dichotomy of figure and ground in painting. The art critic Barry Schwabsky writes “It’s tempting to see them (the paintings) as composed of two superimposed zones. The first would be a dense layer of colors woven together with a palette knife to form a dense gray or sequence of grays – a rich alloy closer in resonance to the subdued lyricism of early Brice Marden (the “Grove Group” of 1972-76, for example) than to the neutral or generic implacability of Gerhard Richter’s gray paintings of the same era, but more enveloping than either.”

Indeed, Leonhardt’s indelible chromatic fields are, as Schwabsky analogizes, “calm seas under variable sunlight and clouds, seas that are calm but nonetheless full of waves,” such as the group of four new paintings with a lighter, silvery palette. Atop their pulsating surfaces sit horizontally or vertically oriented swipes of thick, multi-colored impasto, like raised torches.

These complex yet seemingly casually inscribed marks are turbulent counterpoints against the glowering matter of the richly inflected surface. Leonhardt trowels oil paint with the palette knife, adeptly plowing layers of colors upon each other, as farmers might do part to enrich the soil for the next crop.

Leonhardt’s paintings affirm that figure and ground are intrinsic to each other – that despite all appearances, the space of the painting is nebulous until the surface is further marked in such a way as to declare its existence. Painting is a journey, destination and an uncertain future that Leonhardt confronts tenaciously.