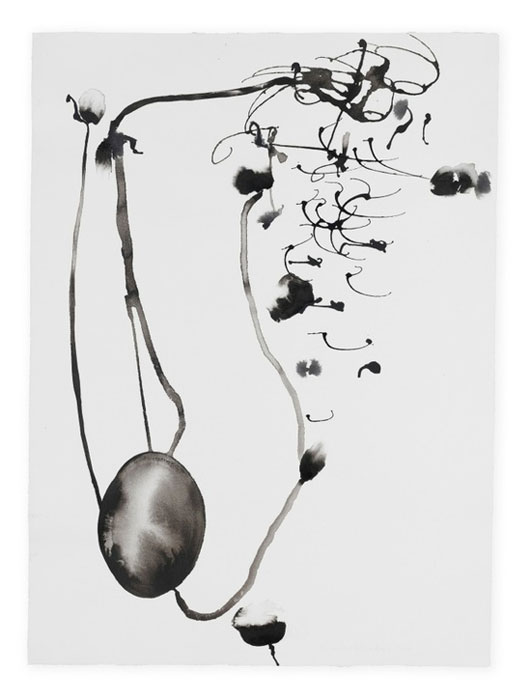 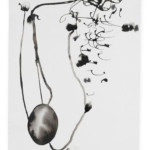 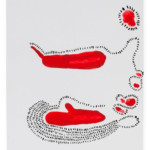 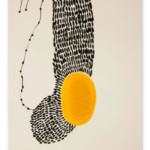 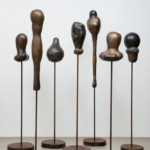 Hauser & Wirth presents an exhibition of new and recent work by one of Brazil’s most significant contemporary artists, Anna Maria Maiolino. With a practice spanning drawing, printmaking, poetry, film, performance, installation and sculpture, Maiolino relentlessly explores notions of subjectivity and the self. The artist’s deeply formative migration from postwar Southern Italy to a politically unstable South America, and her linguistic passage from Italian to Portuguese, engendered an enduring fascination with, and acute interrogation of, identity. Through fragmentation and abstraction, Maiolino’s surfaces are rich with metaphor, alluding to, suggesting and questioning language, sexuality, desire and the unconscious. ‘Tudo Isso (All That)’ is the artist’s first solo exhibition in Switzerland and comprises a group of recent drawings, delineated in the artist’s distinctive gestural blots and traces, alongside new sculpture and a room dedicated to video works.

At the heart of Maiolino’s sculptural practice lies a deep concern with process, with each series searching for a formal solution that captures and manifests a creative action. Since the early 1980s Maiolino has worked with malleable materials that, through her handling, come to bear the imprint of unconscious gestures, daily rituals and sensory expressions of being. The artist began to develop this characteristic technique while living in São Paulo, where she was feeling increasingly disillusioned with the modern metropolis. Maiolino has spoken of this period as one of malaise, of isolation and detachment from earthly experience. The tactile materiality of her sculptural practice, rooted in the sensory, can be read as means to reconcile with what she had lost. Maiolino uses a primal, archaic method where she repeatedly rolls clay into soft cylindrical shapes. These are then fired in a kiln using a technique from Raku ceramic practice in which the surface of each piece retains the traces of the firing process, and sustains its organic materiality and relationship with the earth and hands of the artist. The individual Raku ceramics are grouped together on the floor or suspended by rope, such as with ‘São 38 (They are 38)’ (2016) and ‘Na Horizontal (On the Horizontal)’ (2014). The unique moulded forms become one, their differences negated by sameness – ‘like in a mass of people’, Maiolino says, ‘you are one and no one, your identity dissolved.’

The group of sculptures ‘Entre Si (Among Itself)” belongs to the artist’s 2016 series ‘Hilomorfos (Hylomporths)’, named after Hylomorphism – the Greek philosophical doctrine that physical beings result from the combination of matter and form. Guided by this premise, every sculpture is the product of the capacity to manipulate matter. Maiolino has begun the new series with seven works in which an individual amorphous form cast in bronze is supported by a tall iron rod set in a dense iron base. The hand moulded, organic shapes contrast with the precise finish of the plinths, creating what Maiolino describes as a ‘hybrid material being’. Standing between one and two metres tall they appear totemic yet emanate a human presence.

‘Untitled” from ‘Entre o Dentro e o For a (Between Inside and Outside) series’ (2014) is shaped in white cement, but is evocative of century-old fossils or the membranes of a coral reef, with flecks of cavities and holes. For Maiolino a void is something active – the negative space is a memory of the positive shape that originated in it, the ‘shadow’ of a previous presence. Voids are a recurring motif in the artist’s work, evoking a sense of loss and dislocation.

In the hands of Maiolino, paper becomes more than a surface for drawing; it is both ‘matter and body’, expressed through the act of gesture rather than mark-making or traditional illustrative lines. Employing similar methodologies for each drawing series, she has developed a system of serial movements that in turn render distinct and unique results. ‘Tudo Isso (All That)’ showcases three new series – ‘Aguadas (Watery)’ (2016), ‘Filogenéticos (Phylogenetics)’ (2015), ‘Conta-Gotas (Dropper)’ (2016) – alongside earlier examples. As the title implies, in the ‘Aguadas (Watery)’ drawings Maiolino has manipulated paint and ink with water: holding a piece of paper in her hands she drops ink onto the page and then intuitively manoeuvres the sheet to guide the ink across the space. The introduction of water then transforms the delicate lines into cloudy amorphous shapes, echoing the organic forms of her new bronze sculptures. In the ‘Filogenéticos (Phylogenetics)’ series, the repetitive, rhythmic actions that Maiolino applies in her ceramic practice, are captured on paper. In each work, a dense network of homogenous dots and lines wrap themselves around a biomorphic red mass. The recurrent marks map time and evoke a cellular organism in constant metamorphosis. In contrast, works from the ‘Conta-Gotas (Dropper)’ series retain a more graphic refinement, some appearing like an alphabet of signs, others like diagrams or charts.