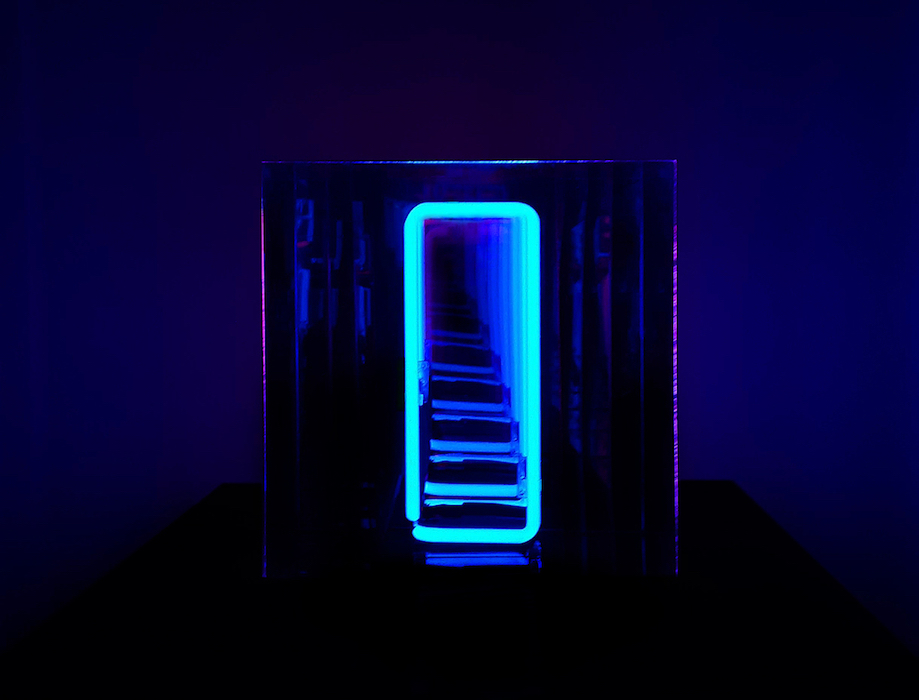 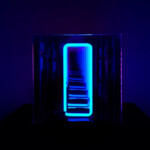 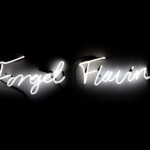 Freight + Volume is pleased to announce “Hyperborea” an exhibition of recent work by interdisciplinary artist Anne Katrine Senstad. Reflecting a deep engagement with various avant-garde movements, including the Neo-Concrete group of Brazil and California’s Light and Space movement, Senstad’s work is underscored by a fixation with properties of form, sound and color, and specifically their overlap, the neurological phenomenon of “synesthesia”, wherein neural pathways signaling sensory experience are crossed and fused. In her first showing at the gallery, the artist presents a series of photographic works depicting precisely arranged, hard-edged planar forms along with neon sculptures and video installations; despite their apparent grounding in the realm of formal abstraction, Senstad’s pieces are set apart by an enigmatic, ethereal character and ephemerality that runs throughout her practice in all mediums. Working with the most elemental qualities of color, light and form, she corporealizes them into mirage-like objects that quiver between representation and perceptual experience, querying the inevitable slippage amongst our simultaneous systems of perception, sensory experience, and rational cognition.

Senstad frequently works with text, and in “Forget Flavin”, first exhibited at the Zengai Museum of Modern Art, Shanghai, she integrates her work with light and deconstruction of perception into an “ironic insult” to the established hierarchy of art history. The issue of the over-representation of male artists is of special significance to Senstad, who observes a particular dearth of female artists within the spheres of Minimalism, Land Art, and the Light and Space movement.

Eschewing LED lights and other artificial materials, Senstad has long used neon heavily in her practice, noting its uncanny formal qualities and literal otherworldly nature, existing in abundance in the earth’s atmosphere and outer space. Recalling the utopian, quasi-mystical roles and participatory models imparted upon abstract geometric constructions by artists throughout the 20th century, perhaps best expressed in the “Manifesto of the Neo-Concrete,” stating their desire to “use phenomenology to create art that expresses complex human realities”, as well as the experiments in sensory deprivation undertaken by Robert Irwin and other Light and Space movement artists, the works in “Hyperborea” transmute raw sensory data into evocative constructions that are often oddly specific and deja-vu like; regarding “Beckoned to Blue and Red”, two video installations in which flickering projections of grain and grit against modulating washes of color stimulate the movement of gaseous neon particles, Senstad notes their similarity to the “Prisoner’s Cinema” phenomenon, or when as a child, one would push their fingers against their eyes to produce dots and patterns. Senstad’s relationship with color is exacting, with particular tonal juxtapositions imparting a sort of ambient consciousness upon the works, further blurring the lines between abstraction, materiality, and reality, situating “Hyperborea” in a nether-space between the organic and artificial.

Two freestanding neon sculptures, “Portal for Perpetuity I and II”, display the nuances of the artist’s illusive ability. Fashioned of neon and transparent mirrors, Senstad describes them as “inverted black holes”, objects of seemingly infinite expanse yet having restrained physical bounds. Their respective color pairings (one of red and blue neon, the other pink and yellow) amplify this notion of sheathed potential energy.

In her photo-based work, the artist explores similar overlaps between color and sensory perception. Depicting a hot pink gradient on a skewed plane, one piece from Senstad’s large-scale “Color Kinesthesia” series is on display; captured as a still from another video piece (the artist frequent recapitulates past formal devices), the hyper-saturated and gradated fuschia tones appear both reflective and diffusive, as if flickering between a physical photograph and a window cut to reveal a pink void. Similarly, an otherworldly inner energy emanates from her “Concrete Planes” series. Consisting of geometric arrangements of hard-edged triangular forms in carefully selected pairings of color, they call attention to the constant tension between physicality and perception, especially the atmospheric spaces and slippages between the two wherein the brain fills in its own hallucinatory simulacra. Organized into triptych and diptych formations, they reflect Senstad’s sensitivity to the fault lines of perception and illusion, as she weaves them into a discourse of color, light, and form.

A full-color, limited edition artist book will be available for purchase at the gallery or online.