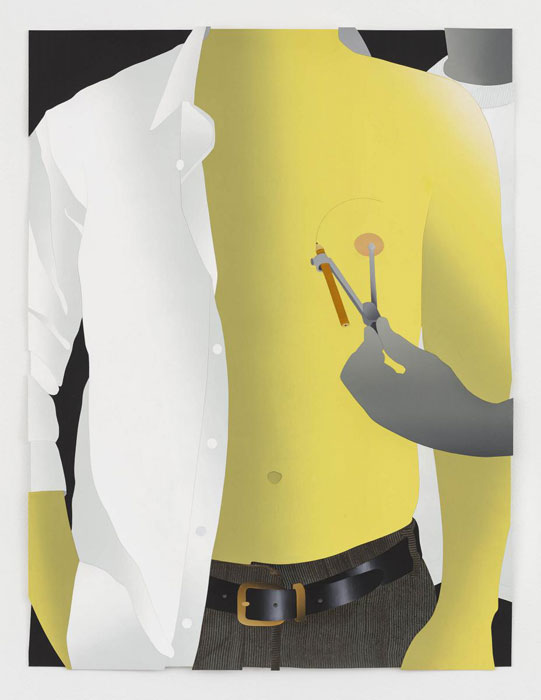 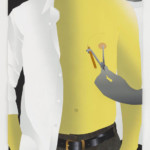 In Iacono’s collages, the subtlest contortions of form – a straightened elbow or crossed legs – imply an entire narrative, an exchange of glances and desires that are at once familiar and entirely strange. Who hasn’t seen a person from across a room and wondered about their life, their accouterments, the objects they touch every day? Might we desperately wish to be one of those objects, to be handled, painted, cast aside, cut apart, and re-assembled? The psychological tension inherent to each composition begets private desire, which waits patiently to burst through, or onto, the surface.

Each work is composed of painted paper that is cut and then assembled like parquetry, with each intricately cut fragment interlocking into the whole. This technical virtuosity and the emotional resonance of each scene exists alongside art historical rigor. We might recall the collages of Hannah Höch or John Heartfield, or Man Ray’s still lives – all of which mobilize estrangement as a revolutionary enterprise. Iacono extends this queer engagement with the avant-garde into the history of design, especially Art Deco, with his combination of chromatic excess with precise, yet flamboyant, geometric forms. We arrive at a queer time, one in which all artistic references are available for reformulation, citation, and dissolution in the service of expanding the representational outlets available to desire.

Anthony Iacono was born in 1987 in Nyack, New York. He received his BFA from the School of Visual Arts in New York in 2010, attended the Skowhegan School of Painting and Sculpture in 2013, and received his MFA at Virginia Commonwealth University’s Sculpture + Extended Media program in Richmond, Virginia last spring. “Crudités at Sunset”, his first solo exhibition at P.P.O.W, was in 2015 and he has been included in group shows at Brennan & Griffin, 106 Green, Rockaway Topless, and Zevitas Marcus. In 2017 he was a recipient of the Toby Devan Lewis Fellowship Award.

He currently lives and works in New York where he is a resident artist at LMCC Workspace.

An illustrated catalog will be available with an essay by William J. Simmons, Provost Fellow in the Humanities at the University of Southern California.