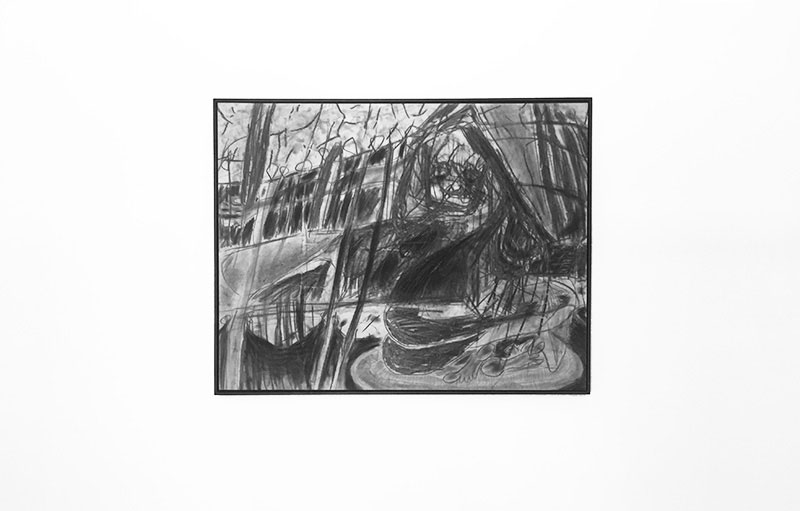 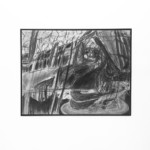 Miler makes images of distorted human figures in a concise, spontaneous fashion. Experimentation follows extended contemplation, and leads increasingly to simple strokes that communicate essential information. Tallied together, these marks lend compositions strength, albeit a tenuous one: upon closer inspection their structural forms threaten to fall apart. In “three figures”, 2016, for example, a medley of what appear to be faces are conjured from a collection of disjointed lines. White washes of paint brighten the upper half of the canvas, itself bisected by a horizon line, below which more complex colors imply land and sea, but only just.

There is an inherent physicality present throughout the work. Drawing inspiration from members of the 20th century avant-garde group CoBrA, like Asger Jorn and Karel Appel, surreal and visceral forms emerge from an aggregate of aggressive mark-making, a necessary and evident technique that stems from the artist’s use of graphite on canvas. The drawing material resists erasure, turning the practice into an additive process. Canvases also reveal signs of additional accumulations, whether residues from other works, or footprints from time spent on the studio floor during Miler’s frenetic, yet precise, drawing spells.

Reflecting the rawness and physical roughness of reality in an increasingly digitized world, Miler’s work cuts against the notion that all art will be inevitably assimilated by popular culture. This knowing duality is reflected in the exhibition’s title, which is taken from a 70s reggae single originally recorded as a joke by Jamaican teens that became a surprise number one hit in the UK.

Anthony Miler (b. 1982, Ohio), currently lives and works in Brooklyn. He holds an MFA from the City College of New York, and a BFA from Adrian College in Michigan. He most recently exhibited in CLOSER at Thierry Goldberg, and in solo shows at Rod Barton, London and ART3, Brooklyn. He has also exhibited at Anonymous Gallery, ZieherSmith, Garis & Hahn, and Regina Rex, among others. He has been featured and written about in Interview Magazine and Artsy.