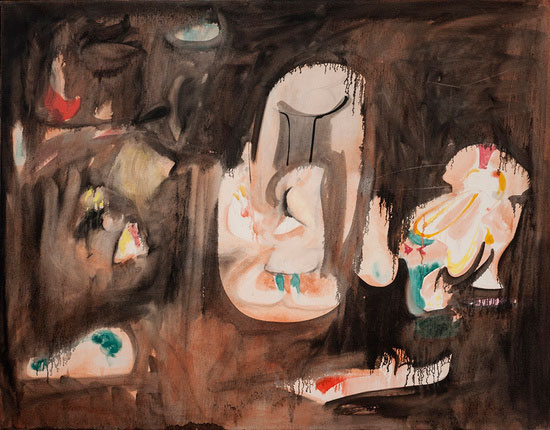 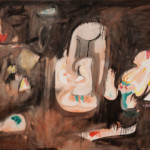 ‘Ardent Nature. Arshile Gorky Landscapes, 1943-47,’ is Hauser & Wirth’s inaugural presentation of works by Arshile Gorky, a seminal figure in the shift to abstraction that transformed twentieth-century American art. By the early 1940s, Gorky had already begun to liberate himself from artistic convention, forging a powerful, if enigmatic, visual language that built upon the freewheeling lyricism of Surrealism and anticipated the concerns of Abstract Expressionism. His breakthrough came in the summer of 1943, during an extended stay at Crooked Run Farm, the Virginia homestead owned by his wife’s parents. Here, the artist became enchanted by the bucolic surroundings, and his response to the fields, blooms, patterns, and colors around him began to manifest in vibrant compositions. The resulting works from this period, filled with organic forms and infused with extraordinary expressive freedom, are among the most moving of Gorky’s career.

Curated by Saskia Spender, the artist’s granddaughter and President of the Arshile Gorky Foundation, the exhibition features over fifty landscapes – including paintings and works on paper – from this critical time in the artist’s life and work. ‘Ardent Nature’ is the first New York exhibition exclusively dedicated to the artist’s mature works, and presents Gorky at the very height of his artistic powers.

Gorky’s time at Crooked Run Farm marked a profound reawakening of his connection to nature. During his first summer in the countryside in 1943 (he would return for extended stays in 1944 and the summer of 1946), Gorky spent day after day in the open pastures, producing scores of ‘plein air’ drawings. Infatuated with his surroundings, he discovered the complexities of natural forms. The trees, milkweed, haystacks, and brackish river were rife with activity, and served as points of departure for new works. It was here, among the flora and fauna, that Gorky revisited his early experiments with automatic drawing, courting free associations with nature and its endless metamorphoses.

In these primal responses to nature, Gorky granted as much presence to the relationships between the objects he observed as the objects themselves. Returning to sometimes idealized memories of his early life on the shores of Lake Van, in Ottoman Anatolia, Gorky incorporated fragments from his childhood into the reality of his surroundings. In this conflation of truth, memory, and desire, the observational yields to an essence rendered in vivid, incandescent auras that reverberate within outlined forms, as seen in the magnificent ‘Waterfall,’ (ca. 1943), on loan from the Hirshhorn Museum and Sculpture Garden. His compositions seemingly pulsate between the interior and the recessive spaces of the work, culminating in a sense that the paintings were created from the center, simultaneously inwards and outwards. Gorky’s highly personal form was crystallized in these works, where his own ‘otherness’ empowered him to forge a unique place in the history of art.

In Gorky’s 1943 work on paper, ‘Untitled (Virginia Landscape),’ biomorphic symbols, swollen and rounded, allude to botanical or human sex organs, and are complemented with wiry lines evocative of vines or stamen. In his later work, such as the masterful ‘Gray Drawing for Pastoral’ (ca.1946 – 1947), these instinctive symbols – still amorphous and suggestive – harden into something of a personal vocabulary comprised of distinct recurring forms.

Gorky often used his works on paper as studies, shifting configurations and colors before further interpreting a composition on canvas. His process of intense contemplation and refinement rarely left anything to chance, yet the resulting works brimmed with a sense of immediacy and spontaneous energy. This characteristic mix of restraint and wild abandon can be seen in his two ‘Pastoral’ paintings from 1947, where Gorky’s gestural planes of color give shape to the negative space and seem to emerge from within the canvas. Alternatively, in the related large-scale drawings, Gorky takes a more reductive approach, by covering his paper with a thin ground of charcoal and carving out the shapes with an eraser until they emerge eerily through the smoky ground, a technique that heightens the ambiguous nature of the vaguely anatomical forms that float across the page.

While made at a professional peak, Gorky’s late works are situated within a period of profound personal tragedy. In the two-year span of 1946 to 1947, the artist suffered a catastrophic studio fire, a painful operation for intestinal cancer, a debilitating automobile accident, and increasing marital troubles. The trauma that colored Gorky’s final years inspired shifts towards a bleaker palette and a more abbreviated line, and his paintings became increasingly enigmatic.

On view through 23 December 2017, the exhibition is accompanied by a richly illustrated publication, ‘Ardent Nature. Arshile Gorky Landscapes, 1943 – 47,’ from Hauser & Wirth Publishers. The book features newly commissioned contributions by Saskia Spender and Edith Devaney, Senior Curator at the Royal Academy of Arts, London.