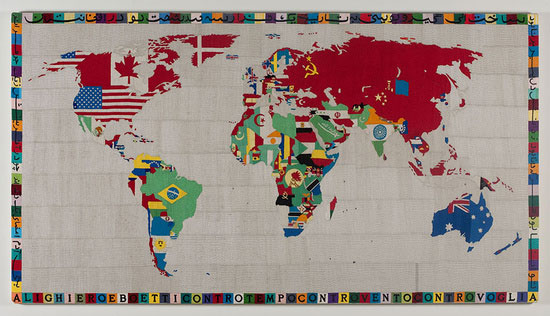 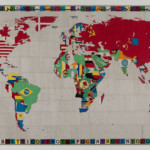 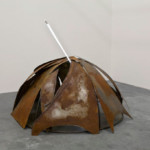 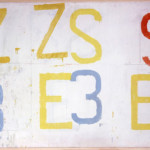 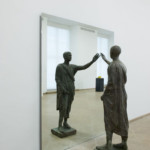 Hauser & Wirth presents ‘Arte Povera. Curated by Ingvild Goetz,’ a comprehensive overview of Italy’s highly innovative twentieth-century art movement, as seen through the eyes of one of its most significant collectors. With over 150 works on view, ‘Arte Povera’ sheds light on the ideas and motivations of a group of Italian artists – jointly known as ‘i poveristi’ – whose radical responses to the sociopolitical upheaval of their time remain vividly relevant today. The exhibition coincides with the 50th anniversary of the Arte Povera movement and features works spanning the late 1950s to the 1990s by Claudio Abate, Giovanni Anselmo, Alighiero Boetti, Pier Paolo Calzolari, Giorgio Colombo, Luciano Fabro, Jannis Kounellis, Mario Merz, Paolo Mussat Sartor, Giulio Paolini, Pino Pascali, Giuseppe Penone, Michelangelo Pistoletto, Emilio Prini, and Gilberto Zorio.

Organized by Ingvild Goetz, the exhibition is accompanied by ‘First of all I prefer thought. Arte Povera seen by Ingvild Goetz,’ a book by Hauser & Wirth Publishers featuring previously unpublished archival materials that trace the emergence of the movement, as well as newly commissioned essays from curators Douglas Fogle and Chiara Vecchiarelli.

In addition to iconic Arte Povera works and important but less familiar paintings, sculptures, and installations, the exhibition includes a vast array of rare archival materials from the library of Ingvild Goetz. Among these are more than 400 monographs, exhibition catalogues, and publications, as well as documentary photographs and invitation cards from early Arte Povera exhibitions. Alongside these rich materials, the works on view capture with clarity and force the visual poetry that ‘i poveristi’ built from disenchantment.

About Arte Povera
Ringing in a new era of artistic practice, Arte Povera emerged against the backdrop of political and social reawakening that defined Italy in the 1960s. At a time marked by increasing disillusionment with the competing ideologies of American capitalism and Soviet communism, Italians began to embrace an identity characterized by urbanity and industrialization that simultaneously paid homage to the country’s cultural heritage. When Italian art critic and curator Germano Celant first introduced the term ‘Arte Povera’ (or ‘poor art’) in September 1967, he identifed a group of young artists based in Milan, Genoa, Rome, and, in particular, Turin.

Rejecting the values of established institutions of government, industry, and culture, these artists created bodies of work that rebuffed Western artistic practices dominating art discourse and markets at the time. Arte Povera recoiled from the notion that a single identifiable style – Minimalism, Conceptual Art, or Pop Art – could determine value. Far from a unified movement, Arte Povera encompassed painting, performance, sculpture, design, and photography in a broad range of styles that emphasized the personal and handmade; embraced the mystical; celebrated the mythological and archaic; and denied commoditization through a range of strategies, including art that deteriorated in real time. Diversity proved to be a paradoxically unifying force, fomenting the movement’s creative possibilities. In confronting longstanding notions of how art could be made and exhibited, Arte Povera offered alternatives to existing patterns of production and consumption, often operating outside the contexts of galleries and museums.

Unfolding as a historical survey across three floors, ‘Arte Povera’ traces the movement’s ability to deploy any and all aspects of life in art, presenting works that cull equally from the banalities of everyday existence and the rich expanses of art history. In the words of Michelangelo Pistoletto, ‘As far as I am concerned… all forms, materials, ideas and means are available and to be used.’ Aptly, visitors first encounter Pistoletto’s ‘Orchestra di stracci – vetro diviso’ (1968) upon entering the gallery. Cheap, colorful rags are combined here with discarded clothing and stacked to form a rectangular structure, inside of which electric kettles hum, hiss, and whistle. The sounds emanating from this work evoke the restless cultural moment in which Pistoletto created it.

Nearby, Jannis Kounellis‘s ‘Senza titolo’ (1959) deconstructs ideas of classical panel paintings by transforming the artist’s studio into a theatrical experience. This seminal work was documented by photographer Claudio Abate in an image (on view) of the artist in a Dadaist costume, painting letters, symbols, and numbers onto an unstretched, unprimed canvas hung directly onto his studio wall. ‘Senza titolo’ constituted Kounellis’s first performance and anticipated the multidisciplinary nature of his subsequent efforts.

While studying medicine at the Università degli Studi di Torino in 1945, Mario Merz was arrested and imprisoned for his association with the anti-fascist group “Giustizia e Libertà”. Throughout his yearlong confinement, Merz created ‘continuous’ drawings using whatever materials were available to him at the time. The practice sparked an interest in the idea of organic creation, an approach that proved to have an enduring influence on Merz’s oeuvre, most notably in works that freely associate organic and found materials. Equally emblematic of Merz’s fascination with the limitless are his works that refer to the “Fibonacci” series, a mathematic sequence in which every number is the sum of the proceeding two. Merz employed the sequence in works such as ‘Crocodilus Fibonacci’ (1991), which references universal principals of growth and creation.

In 1968, Merz produced the first of his igloos, which became a signature element of his art. On view is a late example, ‘Igloo’ (1984 – 1992), that reveals Merz’s preoccupation with the fundamentals of human existence and man’s relationship with nature. Merz considered the igloo an archetypal dwelling that reduced architecture to a minimum, and he admired its resourceful construction from materials at hand. Functionally precarious, his structure here is formed from irregular overlapping sheets of steel, with large gaps revealing the igloo’s interior. Further destabilizing the structure is a current of live electricity that circulates a continuous flow of energy. The antenna-like neon light marks what Merz described as an almost ecstatic act of artistic production.

Similar to Jannis Kounellis, who in 1969 infamously exhibited twelve horses in an installation at L’Attico Gallery in Rome, Pier Paolo Calzolari often incorporated live animals into his works. A subversion of classical still life painting, Calzolari’s ‘Senza titolo’ (1972) includes a rose, walnuts, and a fish in a pitcher of water atop a mattress – a combination that lends an air of eroticism to the dreamlike installation. Around the same time, Calzolari began working with metals and such organic materials as tobacco leaves, fire, and ice. In ‘Senza titolo – Satisfactio. Morti catio. Imperfectio. Putrefactio. Combustio. Incineratio’ (1970), six wall-mounted leather belts are coated in salt and formed into ovals, with the words ‘penance,’ ‘morti cation,’ ‘debauchery,’ ‘putrefaction,’ ‘combustion,’ and ‘incineration’ inscribed in blue neon text along the inside of the stiffened leather.

The exhibition continues with works by Alighiero Boetti, who explored systems of knowledge, classifications, and sequences, often creating works that mined the relationship between order and chance. In 1971, Boetti embarked on the first of many trips to Afghanistan before the Soviet invasion in 1979. His travels inspired a series of traditional weavings and embroideries, conceived in collaboration with Afghan women working at the Royal School of Needlework in Kabul. The most well-known of these textiles are Boetti’s “Mappa”, world maps that depict each country through the design of its national flag according to current political territories, highlighting the shifting geopolitical conditions of the time. Working closely with the local female artisans – though only through contact with male intermediaries, in accordance with the country’s customs – Boetti’s “Mappa” sparked discussions of authorship and dissolved boundaries between artistic genres, fusing fine art with folk craftsmanship.

Other works on view mark a distinct point of divergence from the common association of ‘poor’ materials with the Arte Povera movement. Expertly fabricated and visually arresting, Luciano Fabro‘s towering ‘Piede’ (1972) comprises a column of Shantung silk, extending to the ceiling and grounded to the floor by a claw-like base wrought from Murano glass. A second of the esoteric sculptures is installed nearby, draped in yellow silk with a metal base. Together, the pair of monumental ‘Piedi’ evoke a poetic otherworldliness and display Fabro’s acute attention to craftsmanship and intuitive approach to materials and form.

Representative of Arte Povera’s tendency to explore the ambiguous boundary between nature and art, Giuseppe Penone‘s works speak to a deeply rooted belief that man, like trees, land, and rocks, is continually shaped by his environment. Born in Piedmont, in the small village of Garessio, Penone often created works in a nearby forest, exposing materials to the natural elements in an attempt to integrate his art into the growth processes of the landscape. For ‘Patate’ (1977), Penone buried young potatoes alongside negative plaster casts of an ear, mouth, and nose. When Penone unearthed the potatoes at the next harvest, he discovered mutated examples that bore uncanny resemblances to the cast human sensory organs. Penone then cast these five mutants in bronze, installing them together with a pile of more than two hundred potatoes.

This exhibition is complemented by a Book & Printed Matter Laboratory presented by Hauser & Wirth Publishers.