Artemis Potamianou – On the Origins of Art 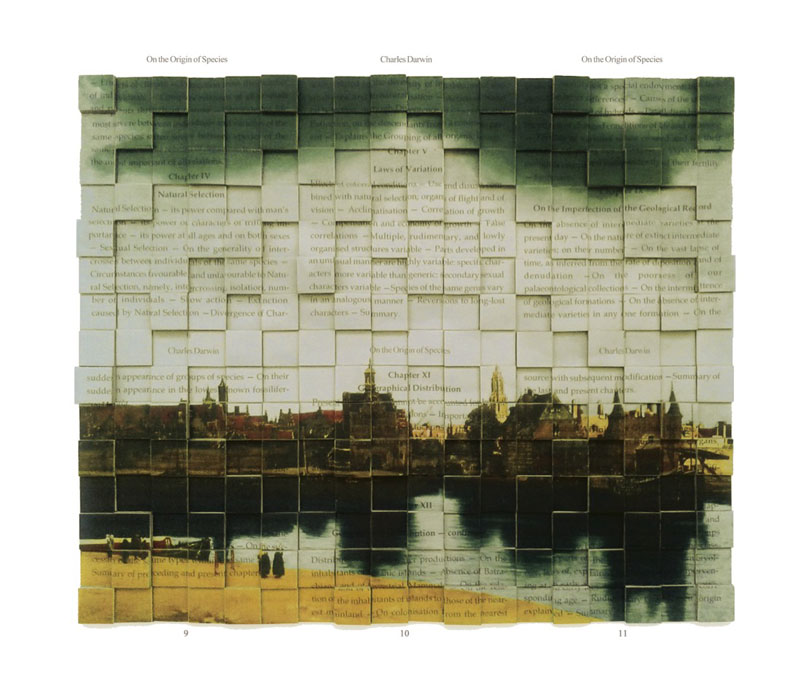 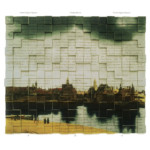 Upon first examination of Potamianou’s present series of 21 pieces, “On the Origins of Art” one may come away with the impression that they’ve encountered a Descartian linear dialog on the history of art. However, despite the show’s title that is based on Darwin’s “The Origins of Species” Potamianou’s series in its multi-faceted, intertwined, and multi-layered appearance and significance, is anything but linear.

In his tract, Darwin treats the idea of natural evolution while also offering many valuable observations about adaptation as well as explaining how through natural selection species evolved without the intervention of a divine creator. One might say that Potamianou also proves that a work of art is much more than the sum of its influences while debunking the notion of a Protean creator. Rather than beginning her installation with an image of the historic inspirations she begins her project with her own work that contains aspects of known masterpieces, thereby overturning the traditional beginning/ending discourse. At the opposite end, of Potamianou’s installation at the end is a work by the artist Joseph Kosuth who has served as her inspiration. So that the order of things have not only been overturned but have also been reversed.

In a seeming palimpsest of book pages of Darwin’s writings Potamianou has overlain images that are transparent enough to allow the book’s script to show through. She has cut and re-connected pieces that in their relief quality are equivalents to mosaics but which in their woven technique are like ribbons. They seem to recede and protrude, interweave, appear and disappear only to re-appear while maintaining the integrity of the image she produced. The resulting images are reminiscent of pixilated images that combine digital and analog techniques and formats.

In the artist’s effort to engage with art history we find a complex dialog and progression that unlike a straight avenue, meanders, peregrinates, and returns to the initial inspiration while beginning with her own contemporary art inspired by history. With this body of work Potamianou examines successful art while debunking the myth of an objective qualitative judgment. Let’s take for example Velazquez’ “Las Meninas” and trace it through the years to see its everlasting influence as well as the vast changes it has undergone through the ages. Velazquez’s masterpiece is still greatly admired for many reasons but above all because its master has embedded it with controversy. This is the paradoxical element causing the viewer to want to engage with it again and again in order to figure out its message. These double entendres result in the confounding of traditional readings which gives the painting much of its appeal. Subsequent versions including those by Picasso, Dali, and a recent one by Joel Peter Witkin although look very different in their abstracted and surrealist forms, pay tribute to Velazquez.

All of these paradoxes create multiple readings that enrich the artwork and cause other artists to be inspired by its complexity. Cézanne, Picasso and many others have executed versions of Luncheon on the Grass while later artists used it to revise modernism through pun, parody, irony and allusion.

Appropriation of images and the recycling of reformatted past art forms placed within a contemporaneous context are all part of the post-modernist tendency to debunk the modernist notion of the originary genius. Another part of the post-modern enterprise has been to break down the barriers between the fine arts and design. Consequently, what Potamianou is doing through her installation is demonstrating the ambivalence, contradictory and critical aspects of post-modernism.