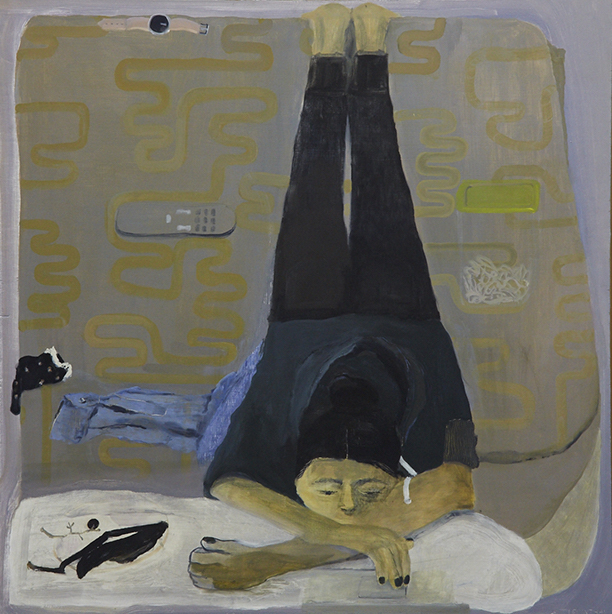 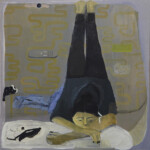 For this exhibition, Levinthal continues to extract ideas from the quotidian as inspiration for her paintings. Male and female figures appear independently and interlocking. Drawn from memory, moments are frozen in time, relatable, and on the edge of consciousness. Illuminating the silence of daily interiority, Levinthal’s paintings depict a divided self.

In “Weighty Table” (2020) a figure is depicted crawling underneath a dining table ostensibly holding up the weight of the table. A metaphor for carrying some sort of psychological burden. At the edge of the painting, just a hint of another person’s presence is depicted by a hand clasping a mug. Levinthal embraces Art History tropes such as the universally identified image of the table and the still life. Echoes of Pierre Bonnard (1867- 1947) and Fairfield Porter (1907-1975) linger among Levinthal’s tenderly observed domestic scenes. Pairing anxiety and drudgery alongside contentment and nuance, Levinthal’s sublime paintings command a thoughtful and closely observed viewing experience.

Playing with light, color and space, Levinthal’s work lingers somewhere between abstraction and figuration. Beyond the flatness and patterns, and after prolonged looking, one realizes how complex the paintings actually are. To really look is to be rewarded.