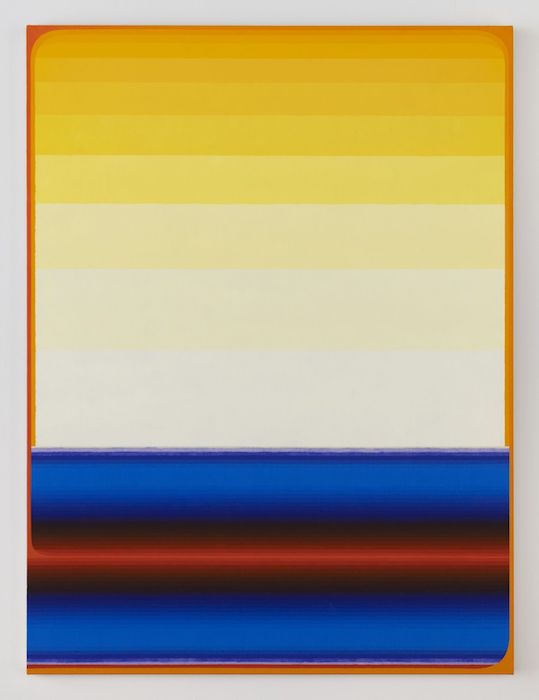 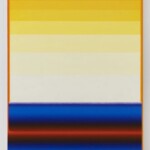 Morgan Lehman is thrilled to present “By Fire”, Audrey Stone’s second solo exhibition with the gallery.

“By Fire” is a series of eighteen abstract paintings first set in motion following the loss of the artist’s mother in 2019. Stone found herself thinking frequently of Leonard Cohen’s song, “Who by Fire,” a modern interpretation of the ancient Hebrew liturgical poem, “Unetaneh Tokef,” which is recited each year during the Jewish High Holy Days. Both the song and the poem muse on the question of who will live and who will die, (and how), in the year to come.

Stone’s paintings are equal parts phenomenological, referential, and emotional. Her frequent use of color gradients is a process of marking time, each color becoming a signifier of slow, methodical labor. In some paintings, each new color band represents a single day of work. Using the structure of the rectangle and the words of the poem as guides, the artist explores new ways of building and manipulating pictorial space, creating vibratory color environments that play with the viewer’s perception. In some works, vacant areas of canvas left ‘blank’ are an expression of absence. Always working in series, Stone decided to conclude “By Fire” at 18 paintings because in Judaism 18 is the numerological equivalent of the word, “chai,” – life. After addressing so much loss, it felt important to the artist to reconnect to the living.

Though inspired by personal events, Stone’s “By Fire” series also speaks to larger notions of loss: the sociopolitical, economic, ecological, and medical tragedies that have challenged humanity of late. The three eponymous “By Fire” paintings are at once a reference to a fire in Stone’s father’s home and to the devastating wildfires that have ravaged California and Australia. The painting, “By Breath, By Air,” came together as the world learned that Covid-19 is transmitted primarily through the air, but also reflects upon the horrific death of George Floyd, whose last breaths were forcibly stolen from him. “By Six” records the six people that the artist recently lost and echoes the words of the epidemiologist who predicted that we would each know six people who died from Covid-19 by the time the pandemic was over. The 18th and final painting in the series, “By Stone,” refers to the line, “Who by stoning?,” in the Hebrew poem, speaking to the back-and-forth throwing of stones that has come to dominate our national discourse and the news cycle. Of course, in a touch of levity, it’s also a wink to the artist herself, and her very personal act of creation.

Audrey Stone received her MFA from Hunter College and her BFA from Pratt Institute, both in painting. She also studied at the Nova Scotia College of Art and Design and was selected for the Artist in the Marketplace program at the Bronx Museum of the Arts. Her work has been exhibited widely across the United States, as well as in Austria, Bulgaria, the Czech Republic, England, France, and Japan. Recent exhibitions include a 2018 solo exhibit of her paintings at Morgan Lehman Gallery, a two-person show at Muriel Guepin Gallery in 2015, and a solo exhibit of a thread-based installation on Governor’s Island in 2014. She has shown in group exhibitions at the Andy Warhol Museum, the Arkansas Art Center, the Columbus Museum, Kenise Barnes Fine Art, Geoffrey Young Gallery, Jeff Bailey Gallery, Kentler International Drawing Space, ODETTA Gallery, Schema Projects, and the Yerba Buena Center for the Arts. Her work is in the collections of New York Presbyterian Hospital, Cleveland Clinic, Credit Suisse, Fidelity Investments and the Amateras Foundation in Sofia, Bulgaria. Stone lives and works in Brooklyn, NY.