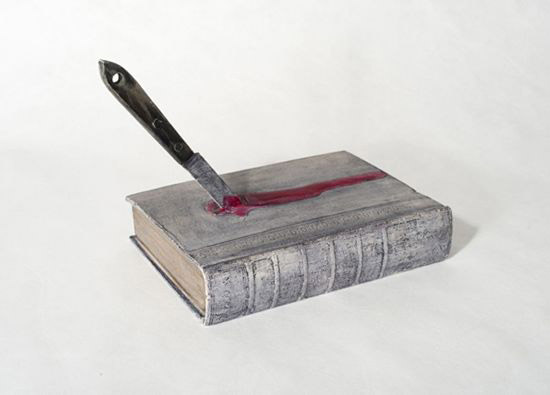 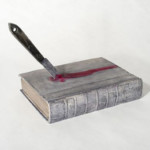 Allan Stone Projects is pleased to present “Barton Benes: Books”. Although known for his work that dealt with the AIDS epidemic, Barton Benes (1942 – 2012) was a prolific artist who continuously worked with everyday objects. The meaning of books and how we perceive them was a favorite subject. Using the book as a symbol for knowledge, Benes conceals the information inherent to the object’s purpose either as cheeky irreverence or as a commentary on American cultural values. For instance, a book on corporate financial policy becomes a purse, a book covered with nails relates to African fetish objects and a copy of Sold American, a book on consumer behavior, is punctured with holes.

Benes’ fascination with the fetishism of objects relates to the work of artists such as Paul Thek and Mike Kelley, using the flotsam, jetsam, and detritus of American society to reveal the dark underbelly of untenable ideals. Many of Benes’ sculptures act as cultural “memento mori”, manipulated with a sardonic sense of humor. As a collector of African art, cabinet of curiosities and other artifacts, Benes found beauty and meaning in relics of human life and culture, which was endemic to his art.

Barton Benes was born in Westwood, NJ, in 1942. After graduating from Pratt University in the early 1960s, Benes spent over 40 years in New York’s West Village, where he lived and worked in a studio at Westbeth Artists Community. Living as an HIV-positive man, Benes became a social advocate for those suffering from the illness, and served on the board of VISUAL-Aids, an awareness and prevention organization for the disease. He was the recipient of numerous awards, including a 1978 Ariana Foundation Award for Art in Mixed Media, a 1983 Rutgers University Vorhees Grant for Printmaking, and a 1988 Pollock-Krasner Foundation Grant. His work has been exhibited at the Centre Pompidou, Paris, the Aldrich Museum of Contemporary Art, the New York Public Library, the Boras Konstmuseum, Sweden, the Cleveland Museum of Art, the Katonah Museum of Art, NY, and the North Dakota Museum of Art among others. His work is in the permanent collections of The Art Institute of Chicago, The Smithsonian, The U.S. Mint and the North Dakota Museum of Art.