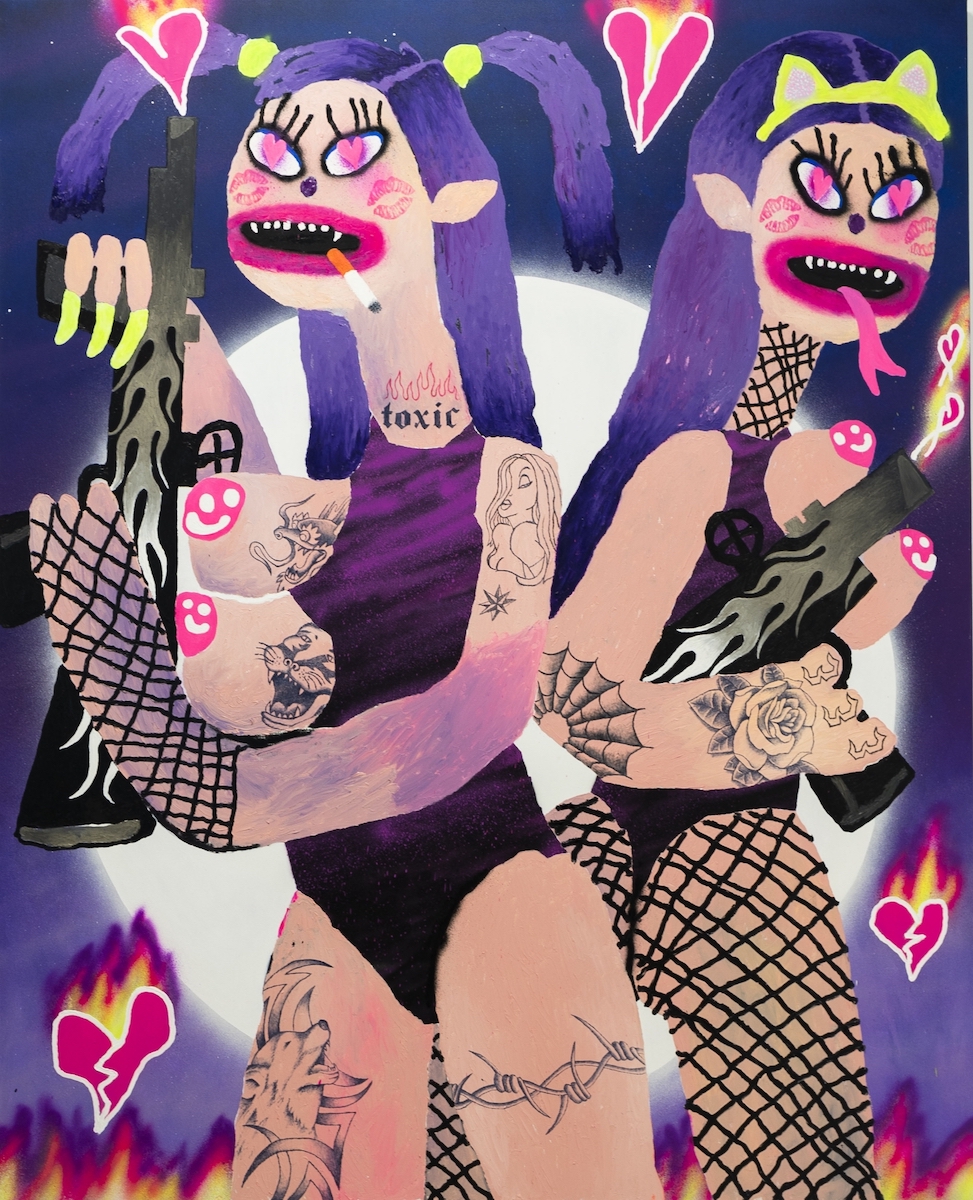 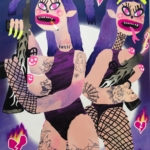 Freight + Volume is thrilled to present “Puti Pandi”, an exhibition of recent paintings by Mallorca-based artist Bel Fullana. The layered, brightly colored hues of Bel Fullana’s canvases revel in extremes. From the severity with which different zones of color are walled off from each other, to the way her otherworldly palette yields a mellowing tranquility – Bel Fullana paintings push their subject-matter and materials to their limit, then spill over into something else.

In the context of “Puti Pandi” (which translated into English means Bad Girls Gang) Fullana’s painterly extremes feed into representations of women who are extreme in their own right. Feminine, marvelous, not to be messed with, alluring, and seemingly indestructible. All the markings of girlishness are present, but as floating signifiers rather than paragons. The figure in the painting “Baby Killer”, for example, radiates all the enchantment of a Lisa Frank sticker; but her boots with hearts for eyes, and her dolphin tattoo, only serve to highlight the fact that she’s actually posing on a battlefield.

Looking into the glistening, anime-like eyes of Fullana’s “bad girls,” one can’t help but think of global conflicts affecting citizens worldwide. The Instagrammable pose each girl adopts suggests love spilling over into duty. Even as soldiers, however, these girls exist to fight for themselves as much as against the onslaughts of their enemies. The figure featured in “Fuck Off Queen” has this very message quite literally written all over her body. Yet this urbane vulgarity becomes an eloquent statement of self-affirmation, of indignant autonomy, when set against the patterned flames that constitute the painting’s backdrop.

An air of familiarity, even security, halos the alien qualities of the dangerous women who constitute Fullana’s “Puti Pandi”. Their fishnet stockings, tight bodysuits, tattoos and long nails could easily feature in a trap or reggaeton music video; and the imminent catastrophes they’re poised to defend against lends them an almost totemic stature. Incorporating imagery, signs, and symbols earmarked as “girly” showcases their maturity in the face of the roles society would impose on them. These “Puti Pandi” are not only ciphers for a world steeped in war, but otherworldly visitors who remind us to embrace the adventitious nature of experience.

Bel Fullana was born in 1985 in Mallorca (Spain) and studied Fine Arts in Sant Jordi University of Barcelona. She’s had solo exhibitions at Allouche Benias Gallery (Athens), Freight + Volume (NY), Galería Fran Reus, L21 Gallery and Galería Herrero de Tejada (Spain) among others. In 2017 she received The Prize Ciutat de Palma of Visual Arts. During the summer of 2018 she has been an artist-in-residence at DNA Summer Residency in Provincetown (Massachusetts) and in 2014 she spend a month in PANAL 361 Art Residence in Buenos Aires. She lives and works in Mallorca, represented by Galería Fran Reus (Spain) and Freight + Volume (NY).