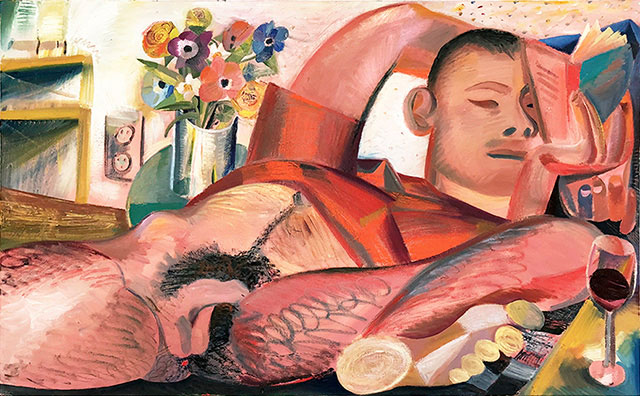 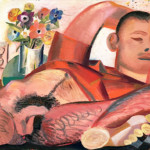 Louis Fratino: Reading in the Evening, 2018

Thierry Goldberg Gallery is pleased to present “Touching Palms”, a group exhibition that brings together four painters of people. Their subjects here, often set in otherwise ordinary or everyday activities, are elevated by the artists’ stylistic decisions, transformed from the traditional and the familiar, reflecting a world we know but do not always see.

Benjamin Degen‘s paintings are complex arrangements of abstracted color; discreet strokes that congeal into a larger, unified whole. While often drawn from personal experience, the forms and scenes depicted are relatable and recognizable on a broad level. Degen’s work acts as a conduit between the ends of these spectrums – between the abstract and the figure, singular and universal experience – which comes to bear especially in “Lucky Ones,” where disembodied legs, devoid of context or cause, traverse glimmering sand on a sunny, unnamed beach, racing forward toward some unknown pleasure.

Supple and sensuous, the paintings of Louis Fratino conjure a certain tenderness towards their subjects. People are set in comfortable yet vulnerable poses. Textures between flesh and bedlinen are fluid, emphasizing the ease of slipping in to a complete and total languorousness. Though warm and occasionally fuzzy, parts of these portraits are accentuated and distinct, which lend an element of abstracted emotionality to the personalities on view.

In Hope Gangloff‘s paintings we see only glimpses. A fleeting moment of a friend’s aloof disinterest while waiting in an airport, rendered in snippets of color; dashes of neon brushstrokes carefully counterbalanced with a controlled line. Gangloff manages to capture and cohere the fleeting nature of light and color, as well as the shifting details of her subjects, who are caught in a telling pose, and for a brief instant, all is resolved.

The pieces by self-taught artist Odinel Pierre Jr. imply art’s ability to inspire hope. His marker and colored pencil works on paper, a mix of portraits of political figures and scenes of museum-goers and otherwise ordinary people, are boldly outlined and full of ebullient color. By treating activists and commonplace actors with an artistic equivalence, Pierre, Jr. highlights the inherent humanitarianism of everyday life, micro-efforts to create change that may often go overlooked.

Benjamin Degen (b. 1976, Brooklyn, NY) lives and works in New York. He received a Bachelor of Fine Arts from The Cooper Union in 1998. Degen is represented by Susan Inglett Gallery and has appeared in numerous museum and gallery exhibitions nationally and internationally. Select exhibitions include Painting as a Radical Form, Collezione Maramotti, Reggio Emilia, Italy and Greater New York, MOMA PS1, Long Island City.

Hope Gangloff (b.1974, Amityville, NY) lives and works in New York. She is a graduate of The Cooper Union School of Art and Science. Previous solo museum exhibitions include the Broad Art Museum, MI; the Aldrich Contemporary Art Museum, CT; the Cantor Arts Center at Stanford University, CA and a three person show at the Kemper Museum of Contemporary Art, MO. Reviews of her work have appeared in The New York Times, The Los Angeles Times, The Paris Review, Art in America, Last Magazine, Modern Painters, Vice, The Village Voice and more.

Odinel Pierre Junior (b. 1976, Port au Prince, Haiti) lives and works in Miami, FL. He is a self taught artist and has previously exhibited his work at the Plantation Museum, Plantation, FL; Buena Vista Gallery, Miami, FL; and Luna Star Cafe, Miami, FL.