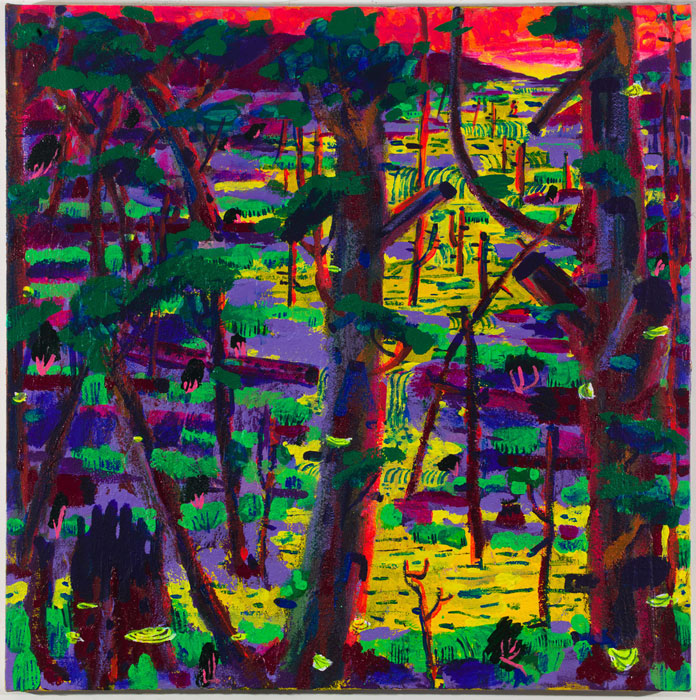 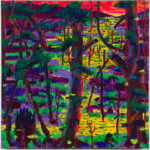 Freight + Volume is pleased to present “Homeland”, a new exhibition of paintings by Benjamin King. Following “Simple Mountain”, his 2014 showing at the Arts + Leisure project space, the works on display present visionary, otherworldly landscapes void of the human presence, questioning our often fraught relationship with nature as well as the dynamics of its existence as an “independent system”.

Central to King’s practice is his modulation of paint with a variety of mediums, including sand and glitter, resulting in visceral, thickly impastoed surfaces. The intensity of his textures creates a dichotomy between the mellifluous surfaces and their pictorial element, and King is unconcerned with concealing the material foundations of his work, denying the notion of the image as a “window into the world” and focusing instead on the parallel mechanics of image and depiction. As if intentionally querying the dynamics of perception, King reduces the forms of his landscapes into patches, brushstrokes, and shafts of vibrant color, lent a quality of motion and dynamism through his dramatic lighting and expressive paint-handling. In “Homeland”, the boundaries between visual phenomena are blurred, coalesced into flickering, mystical imprints of nature; the edges and layers of King’s thickly applied, heavily modified paint chart their own topography, transforming his paintings into liminal zones of sorts, hovering between realms of reality and fantasy, perception and hallucination, and the conscious and subconscious Id. In the artist’s own words, “emotion controls perception” and “perception controls transformation”.

The absence of human traces in the works on display is quite conspicuous, and many of their titles appear to ponder this rather mysterious vacancy. “The Fundamentals”, depicting a monumental rock formation set against a sky streaked with hues of violet, red, and yellow, presents the static serenity of the mountains as a sort of universal gestalt, an icon for the unchanged forces that predate mankind. Bathed in radiant strokes of violet and magenta, the foreboding vista of “A Singularity of Space, Time, and Governance”, builds upon similar themes, with the landscape appearing to await the site of an epochal, elemental convergence. “Governance”, a system considered to be the domain of mankind, is here taken into the fold of the universal, recapitulating King’s understanding of nature as an independent, resilient system. In “Strategies to Build the Financial Sustainability of Your Institution”, our obsession with money and materialism is put to scale against an almost apocalyptic landscape, replete with a blood-red sky and river of magma. Here, King simultaneously comments on the futility of such endeavors in the face of nature’s overwhelming power while indicting our prioritization of “financial sustainability” as we callously abuse our environment.

Despite the expansiveness of King’s landscapes, his work is thoroughly grounded in his deeply personal relationship with the act of painting. He celebrates the momentary impulses of the artistic process, noting that “when the paint is wet, anything can happen and be recorded in the residue.”

Benjamin King lives and works in Poughkeepsie, NY. He holds an MFA from the University of Chicago and a BFA from the School of the Art Institute of Chicago. King’s work has been exhibited locally and internationally in galleries including Freight + Volume, Laroche/Joncas, Longhouse Projects, ACME, Ridgway Exhibitions, Dvorak Sec and The Painting Center. King is a fellow of the Edward F. Albee Foundation and a repeat recipient of the DNA artist in residence award sponsored by Freight + Volume Gallery. Between 2009 and 2015, with artist Jay Henderson, King curated a series of exhibitions in NYC and abroad. Their group was included in an Exit Art and MIT press publication called “Alternative Histories” in 2010, a compendium documenting New York alternative art since the 1960’s.

A full-color, limited edition artist book will accompany the exhibition and is available for purchase on our website.