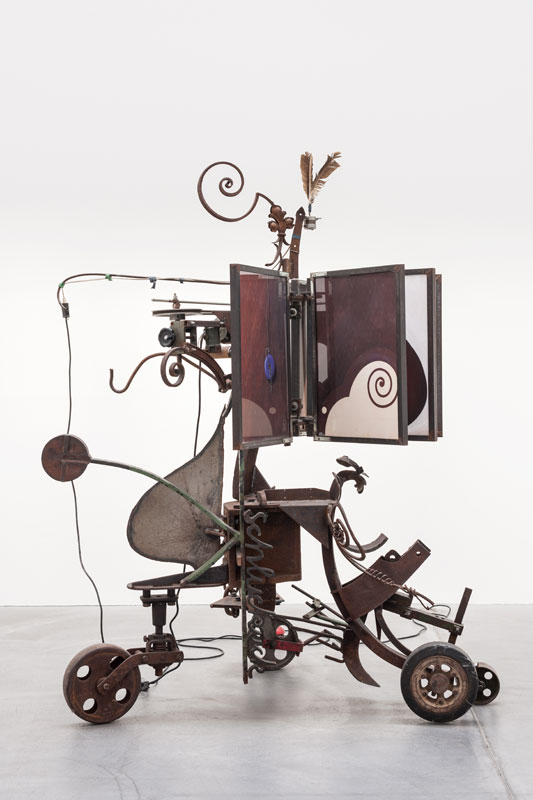 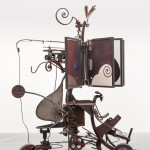 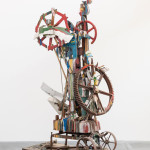 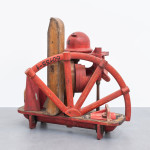 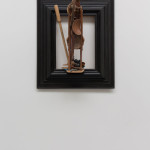 Bernhard Luginbühl (1929 – 2011) is one of Switzerland’s most respected contemporary artists. The new exhibition of his work at von Bartha features Luginbühl’s sculptures, ranging in size from the larger than life to rarer smaller wall pieces. The show also explores Luginbühl’s sculptural collaborations with fellow artists Dieter Roth, Jean Tinguely and Alfred Hofkunst.

Luginbühl’s work is renowned for its tension between movement and counter-movement, between dynamic elements moving into space and supporting structures controlling these movements. “Schuh” (1979-94) and “Haus” (1976-94), which both feature in the von Bartha show, were created as collaborations between the artist, Dieter Roth and Björn Roth. The sculptures bring together Luginbühl’s preferred materials of iron and wood with Roth’s practice of using found objects, including paintbrushes, paint tins, cardboard boxes and an animal skull.

The sculpture “Schluckuck” (1978-79) resulted from a collaboration with Tinguely and Alfred Hofkunst. According to Luginbühl, Tinguely proposed that the sculpture should become an automatic book, its base (with wheels attached) made by Luginbühl, drawings from Hofkunst and an automatic page turning mechanism devised by Tinguely.

Luginbühl and his collaborators’ works fill the gallery with their kinetic, haphazard energy, creating a sense of spontaneity and playfulness. The exhibition also conveys the ambitions of the artists who enjoyed working outside of the studio, creating gigantic sculptures to sit within the natural landscape. Luginbühl and Tinguely for example, led a group of various artists to create the monumental “Le Cyclop” in the woods of Milly-la-Forêt (1969 – 1994), and Luginbühl opened a sculpture park in the land around his home featuring his mammoth works in 1998.

Luginbühl participated in Documenta III in Kassel in 1964 and Documenta 6 in 1977. In 1970 he created the sculpture “Osakapunch” as a contribution to the Swiss Pavilion at the World Expo in Japan. In 1972 a retrospective featuring hundreds of his works was held at the National Gallery in Berlin and a major retrospective was held at the Kunstmuseum in Bern in 1989. In 1976 his work was part of the Venice Biennale.

Luginbühl staged the first of his ‘Burning Actions’ in 1976 when he set alight to his huge wooden structure Anger. In Bern on New Year’s Eve 1999, Luginbühl burned his 24 metre long wooden sculpture “Silvester” which had taken ten people a year to build.

In 2004 the artist opened a museum dedicated to his work in an old abattoir in Burgdorf (Switzerland) and his works are featured in a number of public collections including the Kunstmuseum Basel and Kunstmuseum Bern.