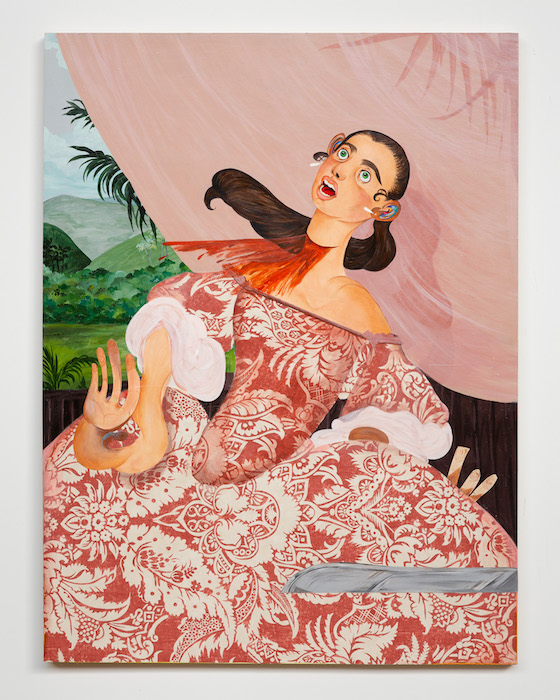 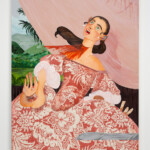 In “Musa x Paradisiaca”, Bony Ramirez fuses together Caribbean iconography and Renaissance styles to create works that reflect on the colonialist history and contemporary sentiments of The Dominican Republic: the artist’s home until age 13.

Unique in his painting practice, Ramirez combines paintings and drawings by adhering life-size paper figures onto painted wood panels, creating layered works where figures blend into their backgrounds. The subjects of these portraits are bold and strange, yet eerily seductive; characterized by oversized and mysteriously contorted hands and feet; ears filled with rainbow swirls; and large, wide, doll-like eyes. Behind Ramirez’s muses (musa) lie saturated, playful colors, or landscapes of quintessential Caribbean beaches, jungles, and symbols of paradise (paraíso). Accompanying many of his subjects are Caribbean still lifes with Caribbean fruits, shells, and plants like the “flamboyant tree” and plantains (scientifically, “Musa X Paradisiaca”). Ramirez uses the traditional elements of Renaissance portraiture, but adapts them with Caribbean iconography, rendering his works’ subject matter away from white gentry to those affected by European colonialism.

The works in “Musa x Paradisiaca” are divided into reflections on the past and present: the main level of the gallery is filled with works representing contemporary Dominican figures, and the works downstairs, tell the story of the tumultuous history of the country. Throughout both levels of the gallery, Ramirez’s drawn figures come to life as three toddler-size sculptures of children, each possessing the same physical features as the artist’s drawn figures.

The nine paintings upstairs depict present-day Dominican life while meditating on the history of the country’s past. In these works Ramirez experiments with the background behind his subjects, veering away from the conventions of traditional portraiture to contemporary influences like abstracted tropical forests, shapes, and animations. Though more modern in their portrayals, these figures still carry with them the history of their ancestors on the island of Hispaniola (the island of Haiti and The Dominican Republic).

Through five paintings downstairs, Ramirez recounts the history of the colonization, slavery, and fight for sovereignty in The Dominican Republic. His retelling begins with the indigenous people, the Taíno, in “Musa x Paradisiaca” (2020), where he portrays a Taíno woman with Dominican plants wrapped in her arms. Like in Renaissance portraiture, where the sitter is surrounded by symbols representing an intimate detail of their personal story, here, Ramirez places the Taíno woman with symbols of her culture, signifying the history of the Taíno before the Spanish colonization. Ramirez reflects the fraught arrival of the Spanish in “La Mentira / The Lie” (2020), where he shows a Spanish woman crossing her fingers in hopes of her country’s triumph over Hispaniola and the region. Following this work, Ramirez’s third work in the series, “The Feast, Plantain and Fish” (2020), portrays a Taíno woman next to a West African woman, alluding to the Spanish’s enslavement of both populations. “No Fue El Final/ It Was Not The End” (2020), the penultimate work of the five, shows the gruesome rebellions against the Spanish in which a Spanish woman is slashed along her neck, bleeding, and perhaps soon to be decapitated. And finally, in Ramirez’s last work in this historical retelling, he personifies the Dominican’s reclamation of power after their declaration of independence from the Spanish. In “Dónde Están Los Limóncillos?” (2020), a Dominican woman uses her beauty to assert her dominance over a white man who leans towards her, yearning for the Limóncillos, (Spanish Limes) in her hand, only to be pulled away.

Though Ramirez has divided his works by time period, the confrontations with the region’s history are shared between them. Accordingly, his works insist that the past exists in the present more than meets our eye. Ramirez’s works show a new side of portraiture, one that tells not of those that wrote history, but those who have been continuously left out of it – allowing us to critically examine his subjects in order to gain a new perspective.