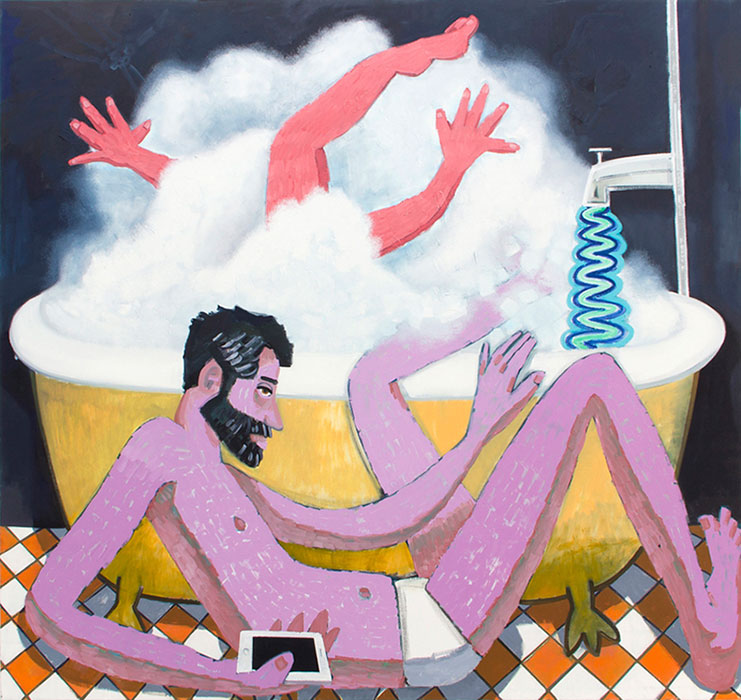 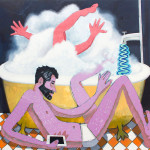 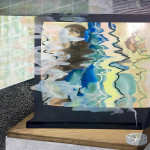 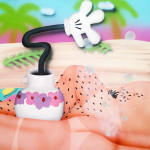 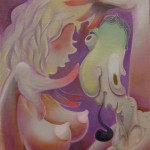 Thierry Goldberg Gallery is pleased to present “Lover”, a four-person group exhibition of paintings by Bradley Biancardi, Christian Little, Sean Phetsarath, and Jeremy Roby. The show explores figuration as it touches upon themes of personal relationships, partners and ex-lovers.

In Bradley Biancardi‘s “Rain Dance/ Bing Bang”, two wobbly characters dance with each other, their bodies exaggeratedly bent and their limbs extended. In “Phone, Foam, Frame, Unders”, Biancardi depicts himself and his partner in a bathroom scene, she is in a foamy tub, while he is on the floor in his underwear holding a phone.

Jeremy Roby‘s fairytale-esque scenes also nod to personal relationships using a more muted color palette. Both “A Light While You’re Away” and “Some Brightness of You”, depict self-referential characters in scenes that portray absence and longing.

Christian Little‘s paintings come alive with trompe l’oeil, rhythmic scenes and textured surfaces that seem removed from the real world. “Hard Feelings 6 (weekend away)” is an abstracted bondage scene with scattered body parts, hot wax and a whip. In “Exhibitionist 14 (medusa and soft drink)” a concealed female figure with black stilettos and a folding fan holds a paper cup with a straw.

Sean Phetsarath takes this fantasy world to a more humorous place. Using glow in the dark hues and iconography from life, Phetsarath often depicts couples in playful situations. In “Joy”, a couple is floating in a bowl of noodles ready to be served at a Ramen place near you. And in “Pop That Bubble”, a cartoon hand comes out of a flowerpot to greet a nude couple sunbathing on the beach.

Bradley Biancardi (b. 1977) received his M.F.A in painting/drawing from the University of Washington in 2005. His work has been featured in numerous exhibitions nationally and internationally, including Johalla Projects, Chicago (solo); BravinLee Programs, New York, NY (2016); Devening Projects + Editions, Chicago, IL (2015); The LOW Museum of Contemporary Culture, Atlanta, GA (2015); and Residence Gallery, Long Beach, CA (2011). In 2014, he received the city of Chicago CASE IAP grant award. He currently lives and works in Chicago, IL.

Christian Little (b. 1982) received his M.F.A in drawing/painting from the State University of New York, New Paltz in 2015. He has been exhibited at Sarah Nightingale Gallery, Watermill, NY (2016); The Hewn Arts Center, Jersey City, NJ (2016); Greenpoint Gallery, Brooklyn (2015); Dorsky Gallery, Queens (2015); and at the Kingston Museum of Contemporary Art, Kingston, NY (2014). He currently lives and works in Kingston, NY.

Sean-McGee Phetsarath (b.1989) is set to receive his M.F.A from the San Francisco Art Institute in 2017. He has exhibited at the Contemporary Art Museum, St. Louis, MO (2016); Campfire Gallery, San Francisco, CA (solo); Circuit 12 Contemporary, Dallas, TX (solo); and Union Gallery at the University of North Texas, Denton, TX (solo). He currently lives and works in San Francisco, CA.