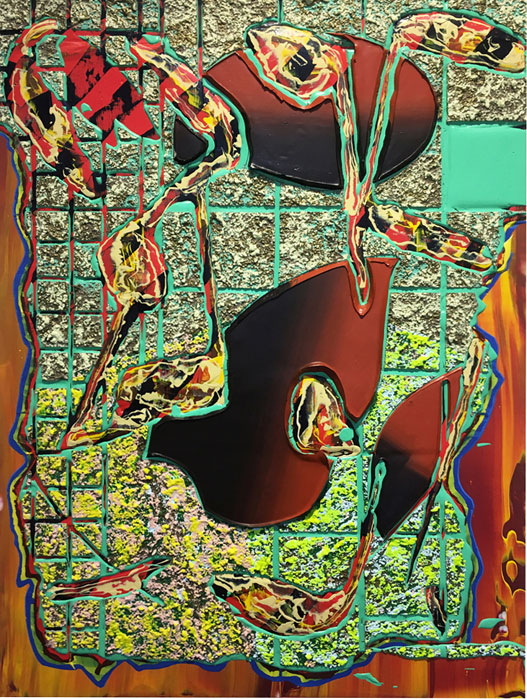 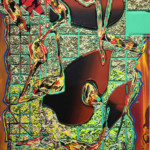 Britton Tolliver makes paintings that draw from the full range of abstraction’s possibilities, fusing diverse positions and procedures in hard-fought, deeply considered compositions. He has long been interested in the grid as a visual and a conceptual structuring device, using it to accentuate the extremes of order and freedom that provide the foundations for his practice.

In this new group of medium-format paintings the grid has begun to close in on itself, leaving unexpected forms and radical figure/ground relationships in its wake. Tolliver executes each work according to a series of discrete stages: initial layers of paint are almost completely obscured by subsequent ones, with masking tape methodically used both to inscribe grids and preserve areas of interest as the composition evolves. Despite the controlled character of this process, thickly applied patches of paint resist control and tend to override demarcations inscribed by the tape; the stippled, dissonant hues that provide a final layer only emphasize this productive sense of instability. Compositions seem to emerge as if by virtue of their own will, according to an innate, almost biological rhythm that reflects the plasticity of paint itself.

For all of these reasons, Tolliver’s paintings speak to a nuanced relationship with the natural world. Their textured surfaces, for instance, which are notable for their depth of relief and seductive tactility, can be read as topographic maps or psychedelic scans of alien landscapes; their high-contrast chromatic range, meanwhile, can recall the lurid immediacy of Los Angeles sunsets. And yet there is also something decidedly digital about the moods and spaces he conjures. Instead of treating the organic and the manmade as opposing states, however, he approaches them as classifications on a single spectrum, posing questions about what it means to make something look and feel ‘natural’ at a time when technology is a pervasive – and at times predominant – force.

Even as Tolliver continues to grapple with the legacies of abstraction in a contemporary context, his most recent works have begun to embrace figurative elements. Just as pigment and medium are given free range within carefully defined limits to interact on their own terms, Tolliver allows the associative potential of his imagery to overflow the limits ordinarily attributed to abstract genres. In so doing, he depicts the action of perception as it continuously strives to fix meaning amid unpredictable circumstances, as well as the futility of human attempts to exert undue control over the surrounding environment.