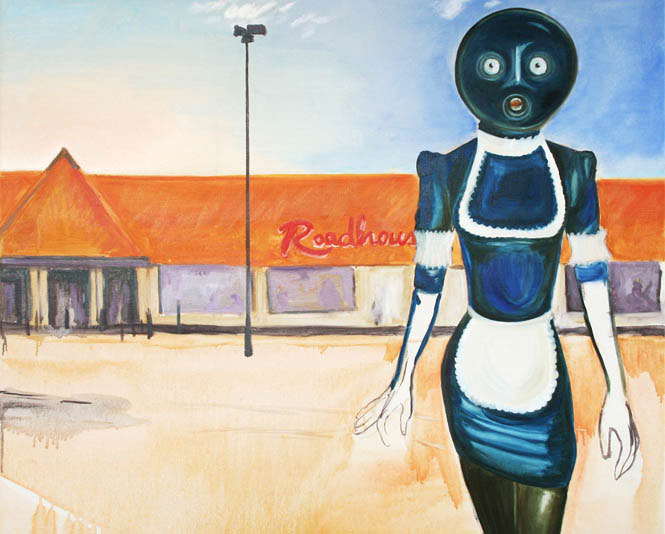 With a whole cosmology of mega data and imagery now readily available at the touch of a screen, artists are free to make up their own worlds, hybridising versions of reality, mixing it up, musing, humouring, personalising and confounding as they go. “Lucy in the Sky” presents five very personal visions of the stuff that surrounds us.

Brobirn use collage as a metaphor for the contemporary impossibility of processing the vast amount of fragmented information we receive from the media/internet. They assemble ill-fitting fragments – movie stars and celebrities, historical figures, narratives from novels and soap operas, contemporary technology and historical fact – to construct their own hybrids and define their experience. Thus history, myth, news, gossip, personal experience and emotions connect to create a very singular fragile and surreal concept of reality.

Emma Cousin says ‘I paint objects because the act of oil painting tells me something new about the object. I want to face something unsettling – anti-Instinct, unexpected and unexplained, that feels like it is painted from the inside out like a ball of wool or a man’s head’. The lunacy of these subjects interrogates movement and places the figurative article into an abstract dimension embracing surprise, non-sequitur and surrealist automatism.

Adam Kelly paints intuitively using a subjective system of logic as a guiding mechanism to suggest simple forms or spaces. Smudgy, recognisable motifs loom on small uniform canvasses. Whether picturing helmets or Ned Kelly performing stand up comedy in a modern-day environment, the process always begins with a central image and idea. Kelly then ‘washes’ the original image from the surface to discover a new vision entirely.

Neil Metzner says ‘For the past few years I’ve been painting things that are: vanishing, sinking, melting or slightly out of reach. My pictures are not directly about their central motifs (for instance, a plane crash or someone drowning) instead, these themes offer an entry point and also a clue. I’m trying to create something particular, perhaps a glimpse into the future, that has been shaped over time and in-part by events that have left some kind of scar’.