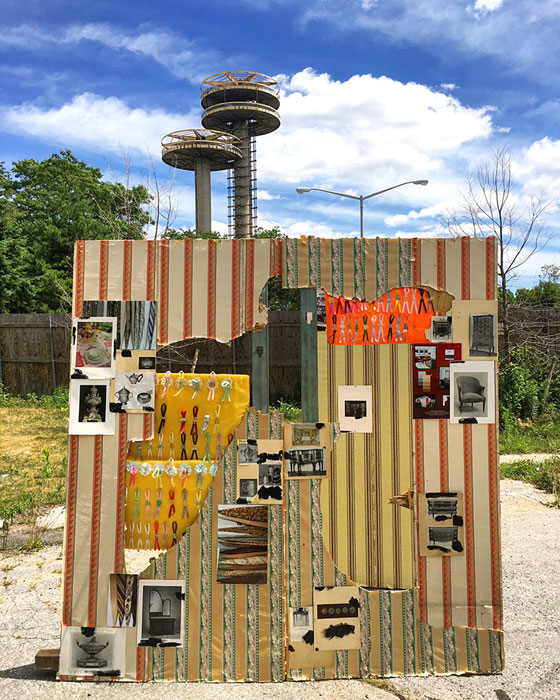 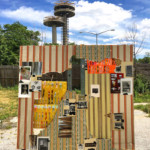 Luis De Jesus Los Angeles is very pleased to announce Skull Crusher 1964, the artist’s debut solo exhibition with the Gallery, to be presented in Gallery 1.

Marking our 5th year in Culver City, Zanisnik’s exhibition “Skull Crusher 1964” consists of a new multidisciplinary body of work that loosely explores a road trip across America in the year 1964. The exhibition will include large-scale photographs, a multi-channel video and a site-specific installation.

The two new large-scale photographs are of sets constructed outdoors by the artist in Flushing Meadows Corona Park in Queens, NY, where the artist’s studio is currently located. The park is most famous for being the site of the 1964 World’s Fair, and there are still remains of the fair’s monuments scattered throughout the park. Zanisnik’s photographs open up onto these monuments through tattered and torn holes in his sets. The camera peers through domestic and found materials such as torn wallpapers, metal wall studs, and printouts of antique furniture to reveal observation decks, carved, gold medallions and a giant metallic globe in the distance. The photographs conflate foreground and background into a flattened and disoriented space that feels both artificial and documentary at the same time. The photographs speak to current trends in digital manipulation and collage, yet are inherently unmanipulated and authentic photographs of the park.

In the two-channel video, “13 States,” Zanisnik loosely documents a recent drive from the Northeast to the Southern United States. While one channels details a journey through the Great Smoky Mountains National Park and abandoned roadside attractions the other channel reveals domestic objects floating over a hypnotic computer-generated highway. Zanisnik uses the road trip genre as a starting point for this work but ultimately the narrative collapses upon itself. Incorporating found highway footage, clip art, animation, and television infomercials, Zanisnik’s video blurs sites, states, performance and document while archiving the objects and experiences collected along the way. Zanisnik has had a long fascination with roadside America, an interest that began with his first job, working at a highway carnival in New Jersey in the late 1990s.

The installation consists of a towering, object-laden structure that exists somewhere between autonomous sculpture and site-specific installation. Constructed out of domestic building materials such as bathroom tiles, wood and drywall, the sculpture appears as if it were ripped out of a crumbling building, yet in fact it is entirely new and without a material history. Inside this structure is where a history evolves, with punched holes revealing midcentury hand-printed wallpaper, faded computer printouts and empty wine bottles and baseball cards, many from the year 1964. Part medieval reliquary, part monument to the contemporary relics we preserve and display, the work brings to the foreground Zansnik’s fascination with collecting, hoarding and the potential for inanimate objects to have nearly animistic qualities.

Bryan Zanisnik received an MFA from Hunter College and attended the Skowhegan School of Painting and Sculpture. He has recently exhibited and performed in New York at MoMA PS1, Sculpture Center, and the Brooklyn Museum; in Philadelphia at the Institute of Contemporary Art and the Fabric Workshop and Museum; in Miami at the De La Cruz Collection; in Los Angeles at LAXART, and internationally at the Istanbul Museum of Modern Art, the Kunsthalle Exnergasse in Vienna and the Futura Centre for Contemporary Art in Prague. He has completed residencies at the Lower Manhattan Cultural Council Workspace Program, the Smack Mellon Artist Studio Program, the Macdowell Colony, the Art Omi International Artists Residency, and the Guangdong Times Museum in Guangzhou, China. In January of 2016 he presented a newly commissioned site-specific installation at Locust Projects in Miami, Florida. Zanisnik’s work has been widely reviewed in the New York Times, Artforum, Art in America, ARTnews, Modern Painters, Time Out New York, and the Village Voice, among others. Zanisnik is included in Art21’s award-winning documentary series “New York Close Up”, has been a featured guest on the Leonard Lopate Show on National Public Radio and is a contributing writer at Triple Canopy.