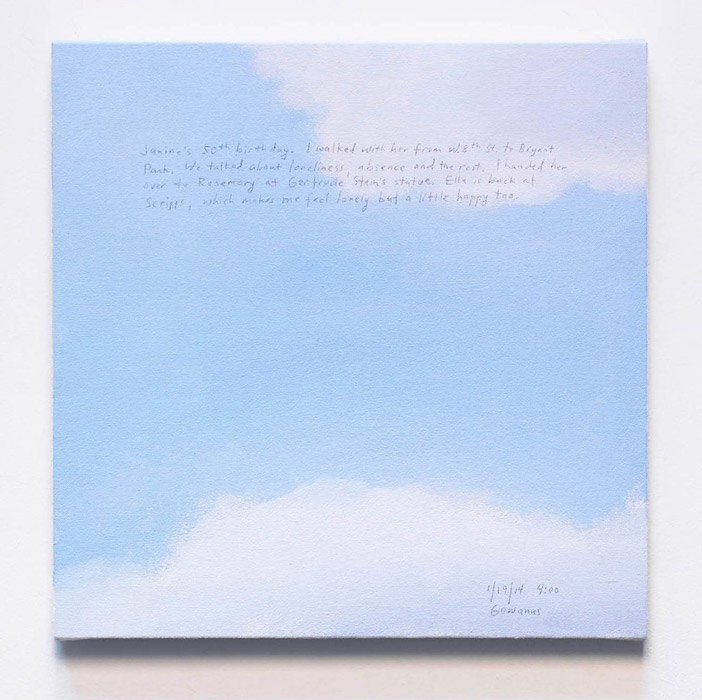 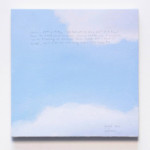 Starting in 2001, Byron Kim engaged in a project to make a single painting every week. In this ongoing series entitled “Sunday Paintings”, Kim has looked upward and painted a patch of sky on a 14 x 14 inch canvas, inscribing a short journalistic entry in pen or pencil, and marking the specific place and time. Featuring only a portion of this prolific project, this show will include nearly 100 paintings representing various moments from 2001-present. Over the course of the exhibition, Kim will create and display a new “Sunday Painting” week after week.

Byron Kim’s paintings occupy a territory between representation and abstraction. Using the human body, human culture, or the natural world as his primary source material, Kim creates perceptive, subtle and poetic works. Duration and seriality are an important aspect to many of Kim’s works, and his “Sunday Paintings” are the longest and most personal attempt at a lifelong project. Kim has said, “My work has mostly been concerned with the relationship of a part to the whole. How am I connected to the others in the world, and how are we all connected to the greater whole?” As such, he often spends years grappling with a concept, such as his well-known serial portrait “Synecdoche”. In this project, which was the hallmark of the 1993 Whitney Biennial, Kim paints groups of small, monochrome panels that replicate the skin tone of his sundry sitters.

The “Sunday Paintings” are decidedly uniform in many ways, yet individually, Kim creates the singular “portrait” of a day by capturing wispy clouds, vibrant blues, or dreary greys. Kim’s words are intentionally observational – even mundane – in their content, but these phrases keenly express the ordinariness and changeability of everyday life. On January 21, 2007, Kim records “Finally, it’s cold. I’m so stressed out today. Little Things. Ella’s midterms. Addee’s boredom. The crates I need to receive tomorrow.” In a more momentous note from 2009, he writes, “Today we have a Black President.” For viewers, the context of the painting can be elusive or strikingly memorable and the expansive subject matter is at times both intimately personal and universal. Considered in its totality, the “Sunday Paintings” series becomes the ongoing record of a life.

Byron Kim (b. 1961) has exhibited widely in the United States and internationally. Kim’s mid-career survey, “Threshold”, traveled from the Berkeley Art Museum, CA to the Samsung Museum of Modern Art in Seoul and on to five other locations in the United States from 2006-2007. In 2015, Kim’s work was presented at the Sharjah Biennial 12 (United Arab Emirates) and in a solo exhibition at the Museum of Contemporary Art San Diego titled “Pond Lily Over Mushroom Cloud: Byron Kim Adapts the Black on Black Cosmology of Maria Martinez”. He is the recipient of numerous awards, including a Guggenheim Fellowship in 2016, and his works are in the permanent collections of the National Gallery of Art, Washington, D.C.; The Brooklyn Museum of Art, NY; Museum of Contemporary Art, San Diego, CA; the Whitney Museum of American Art, NY; and the Art Institute of Chicago among others. Kim will be included in the Gwangju Biennale 2018 in Gwangju, South Korea. Kim is a Senior Critic at Yale University School of Art. He received a BA from Yale in 1983 and attended Skowhegan School of Painting and Sculpture in 1986. He lives and works in Brooklyn, NY.