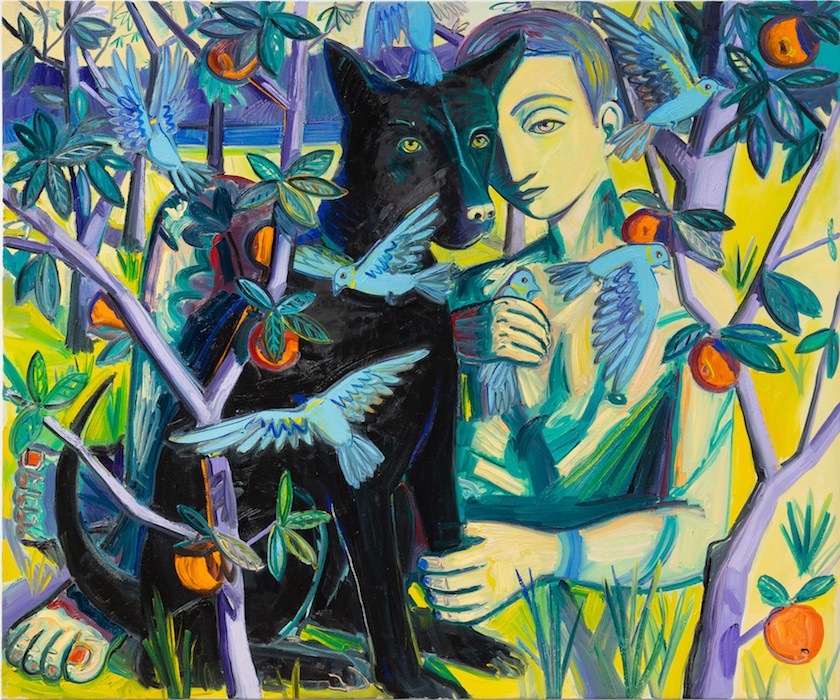 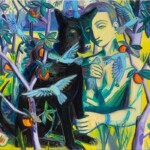 In “Viewfinder”, four artists explore performativity and the act of being beholden as spectacle. Works in the exhibition depict figures that grapple with being in the spotlight, or become empowered by escaping it.

Veronica Fernandez paints blurred scenes that portray the inner emotions of her figures, many of them caught in limbo between dream and reality. In “Burned Through The Overcast (Say Cheese)” (2021), she depicts a figure smiling for an unseen photographer, highlighting engrained bodily performances for the camera and acknowledging the artificiality of such behaviors.

Bradley McCrary composes his paintings like scenes set on a stage. His figures, like stars of a play, are dramatic and memorable. They move in front of idyllic landscapes, enacting scenes from the canons of painting and cinema. McCrary also nods to kitsch renderings of drama in popular media in works like “The Angels Ass Kicking Pose” (2020), wherein three figures perform the iconic ensemble pose in Charlie’s Angels. These depicted reenactments of imagined private performances create a feedback loop, a meta-analysis of who a performance is for: is it for the artist depicting it – or for the viewer of the painting?

Zatara McIntyre‘s works focus on mythology while subverting stereotypes seen in depictions of the black female body. In her three presented drawings in “Viewfinder”, she places her figures in other worldly realms where they express vulnerability and strength as they harness agency to empower their own bodies. McIntyre does not idealize the women, and instead allows her figures to worship themselves. The women in McIntyre’s works are not performing and are not for consumption. Instead, McIntyre’s depictions reflect on the notion of ‘taking up space’ and the importance of self-empowerment.

In Carlo D’Anselmi‘s works, he portrays figures immersed in wildlife, inhabiting imaginative worlds of coexistence. The scenes are private and intimate, with each figure set amongst animals. The subjects are aware of the viewer, yet the emotion caught within their faces is complicated. Have they been caught, or are they simply lost in thought? Is this the place where they belong?

Veronica Fernandez (b. 1998, Norfolk, VA) lives and works in Los Angeles, CA. She holds a BFA from The School of Visual Arts, NY. Fernandez has previously exhibited at Residency Art Gallery, Inglewood, CA; Jenkins Johnson Gallery, Brooklyn, NY; Thierry Goldberg Gallery, New York, NY; C.R.E.T.A., Rome, Italy; and SVA Chelsea Gallery, NY among others. She will be included in an upcoming exhibition at MONTI8, Latina, Italy. This is her second exhibition with Thierry Goldberg Gallery following her online solo show “I Put My Faith In My Temple” in 2020.