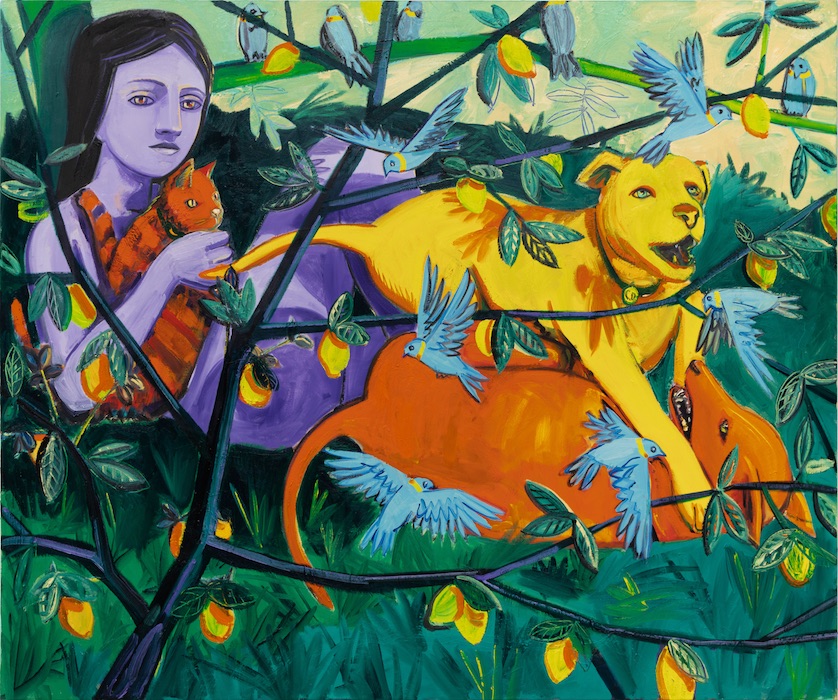 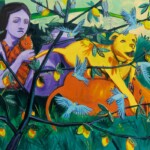 Thierry Goldberg is pleased to present “Wake Up”, an exhibition of new works by Carlo D’Anselmi.

“Wake Up” continues D’Anselmi’s exploration of the ongoing tension between humanity and the natural world. The artist’s large-scale paintings depict statuesque figures that inhabit lush, dreamlike worlds. Evoking the vitality of Fauvism, their skin is illuminated by vivid hues of orange, turquoise, and lavender, complemented by the fruit trees and overgrown landscapes that surround them. The majority of the inhabitants of the artist’s painterly universe exist in solitude, immersed in their own private realities.

With his latest body of work, D’Anselmi considers the purpose or positioning of humans within their environments. While still building upon the pensive quality of his previous works, the artist makes a clear departure in terms of the intentionality of his subjects. He now begins to suggest self-awareness in his figures, attributing to them a set of decisive actions indicating that they may be beginning to wake up from their dreamlike state. In some instances, these actions take the form of violence or interference, such as the act of pruning a tree in “Pruning I” (2021). In others, the figures approach their environments with a distanced curiosity, observing the flora and fauna around them with a calm and watchful eye. These actions not only serve as a metaphor for the various ways in which humans attempt to control the natural world, but they refer back to the editorial process of painting. Though D’Anselmi conjures imagery from an intuitive place, there is always a point at which the artist steps in with a more rational or logical approach, removing a part of something in order to benefit its overall wellbeing.

In “Dogfight” (2021), two dogs play with one another as a lavender figure reclines in the background. Cerulean blue birds flutter around the dogs, adding movement and energy to their encounter. The scene seems to teeter on the edge of chaos, resting somewhere between harmless fun and primal aggression. One dog appears distracted, while the other bares its teeth. Should we allow this moment to unfold as it may? Again, D’Anselmi translates the challenges of his own painterly process onto the canvas. As much as “Dogfight” (2021) is about a play/fight between animals, it is also a battle of colors; an allegory for how different shades and hues behave in a painting, working in harmony with one another while competing for the viewer’s attention.

Though the scenes and characters of D’Anselmi’s works are entirely imagined, they are founded within the artist’s memories. His father, for instance, grew many fruit trees and was often trimming and pruning them. The birdhouse in “Bird House” (2021) is actually a smaller version of the artist’s childhood home, and we can find fragments of his grandmother’s summerhouse incorporated throughout the works in “Wake Up”. D’Anselmi is therefore constantly testing the boundary between what is real and what is not; between the way things are supposed to be and what he, as an artist, can get away with. By fabricating a world that does not abide by the rules of reality, D’Anselmi is able to access a childlike sense of wonder. The artist’s latest body of work captures just how vast and full of possibility the world feels when we begin to discover it for the first time.