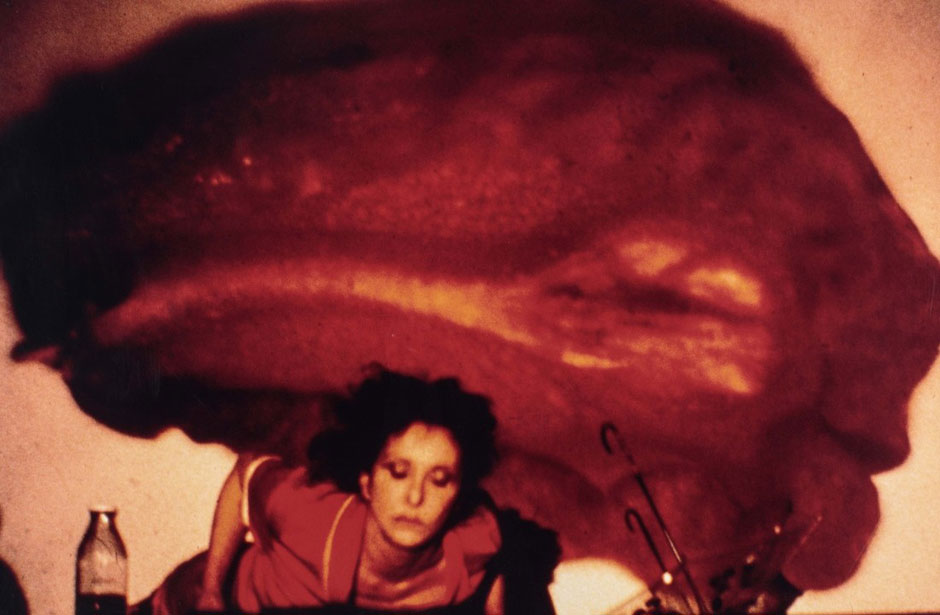 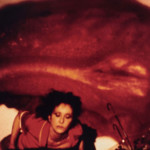 “Further Evidence – Exhibit A” at P•P•O•W will present the rarely-seen “Known/Unknown: Plague Column” (1995-6), an installation which combines collage, sculptures, wall texts, photographs, and video. The title refers to a Viennese plague column from the 17th century, in which the bubonic plague is represented as a witch; the victory over disease is imagined as the conquering of an unruly and malignant femininity. Video loops of enlarged permutated cancer cells are juxtaposed with grids of religious icons. The savagery of the witch hunt and of breast cancer itself are unified within the maligned body, both feared and desired. As scholar Soyoung Yoon notes in the catalogue essay, “Known/Unknown: Plague Column” asks: Is there a continuity between this representation of the plague and our more recent imagination about cancer, a link between witch hunts and the current warfare model of cancer treatment?

Morphological vocabularies which originate in dreams initiate Schneemann’s process. “Fresh Blood – A Dream Morphology” (1981-7), also on view at P•P•O•W, began with a dream dominated by imagery of a bouquet of dried leaves and an umbrella. These images were united by the common form they shared – a ‘V’ shape. Schneemann composed a visual vocabulary of related ‘V’ forms in a series of works in varying media over the course of ten years.

Carolee Schneemann lives and works in upstate New York. She was the subject of the recent retrospective, “Carolee Schneemann: Kinetic Painting” at the Museum der Moderne Salzburg, Austria, in 2015, which was accompanied by a full-color catalogue. The exhibition will travel to the Museum für Moderne Kunst Frankfurt am Main, Germany, in 2017. A major monograph, “Carolee Schneemann: Unforgivable”, was published by Black Dog in December 2015. The Artist’s Institute at Hunter College in New York held a multi-part exhibition, “Carolee Schneemann Residency”. In 2013, the artist was the subject of the solo exhibition, “Carolee Schneemann: Then and Now”, which traveled from the Musée départemental d’art contemporain de Rochechouart in France to the Museo de Arte Contemporáneo de Castilla y León in Spain. In 2010, the Samuel Dorsky Museum of Art at the State University of New York in New Paltz presented the retrospective “Carolee Schneemann: Within and Beyond the Premises”. An impressive collection of over forty years of letters to and from the artist was published in “Correspondence Course: An Epistolary History of Carolee Schneemann and Her Circle”, edited by Kristine Stiles. Schneemann’s work is included in major museum collections around the world, including the Museum der Moderne Salzburg, Museo Nacional Centro de Arte Reina Sofía, Madrid; Museum of Modern Art, New York; San Francisco Museum of Modern Art; Tate Modern, London; Centre Georges Pompidou, Paris; and Hirshhorn Museum and Sculpture Garden, Washington, D.C.