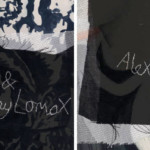 The fabric, colour and cut of costumes are part of the visual design of a film rather than whims of fashion. A costume serves the narrative, describes character and on occasion creates a star.

There is however more to a costume than its outer bombast. A costume is a carapace; it carries the trace of its wearer. Jane Gaines describes how in the early days of Hollywood it was believed that costuming ‘brought forth’ traits. Details that may have been invisible on screen, such as colour and luxurious linings were considered to be important, as ‘actors could not be expected to project realistic emotions if they were costumed only in shades of grey’ and Hollywood costumers on occasion added extra layers of lace to petticoats and embroidered initials inside gloves to help the actor’s performance.

This exhibition by artists Cathy Lomax and Alex Michon borrows and adapts the classical Hollywood credit line ‘Gowns by Orry-Kelly’ for its title. Orry-Kelly, a costume designer who worked on films such as “Casablanca”, “Now Voyager” and “An American in Paris”, was born Orry George Kelly but decided for his professional identity to go by the enigmatic Orry-Kelly. However rather than a literal examination of film costume and the work of Orry-Kelly, the artists are more interested in the essence and intimacy of on-screen garments and the idea that costumes can both conceal and reveal. The paintings and sewn material works in the exhibition zoom in, flatten out, and generally mess with classic film costumes, stripping out details to create works that allude to secrets, re-enactments and the masquerade of femininity.