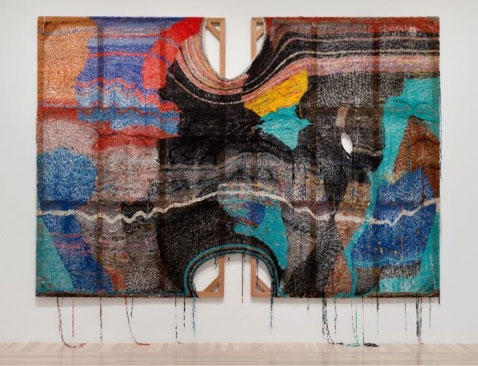 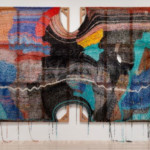 Hansen’s knitted works tread the line between painting and sculpture, their web-like construction occasionally revealing the stretcher behind.

Simon Lee Gallery, Hong Kong, is pleased to announce the first solo exhibition in Asia by Los Angeles-based artist Channing Hansen. In “Pattern Recognition” Hansen presents a new series of his signature hand-knitted textile-based works, which bring together craft and computation to explore theories related to the intersection of art, science and technology.

Hansen’s labour-intensive process sees him skirt, wash, dye, blend and spin the wool that he then uses to knit the works by hand, using a pattern that is determined by a computer-generated algorithm whose data set draws from a range of scientific concepts and mathematical formulae. Potentially encompassing an infinite combination of colours, fibres and patterns, this algorithm dictates the composition but the work’s appearance is not known until it is complete. Once finished, each knitted textile is stretched over a wooden frame; yet its appearance is provisional. Each cell, or ‘knit’, contains a multitude of possibilities – its shape, size and position on the textile grid are fixed by the frame but potentially flexible and subject to change over time.

Hansen’s knitted works tread the line between painting and sculpture, their web-like construction occasionally revealing the stretcher behind. Their relationship to craft may initially seem to be at odds with the scientific concepts informing the algorithm. However, bringing these two disciplines into dialogue allows Hansen to explore the tension between chaos and order, as the artist’s hand introduces human variability within an otherwise programmatic composition. This is evident in the forms his textiles evoke, which might resemble tendrils of DNA, crystalline structures, or biomorphic shapes.

The works in “Pattern Recognition” emerge from Hansen’s ongoing exploration of algorithms and the ways in which they exert an invisible influence on all elements of human life. Pattern recognition is an algorithmic process defined by computer science as the assignation or determination of identity, based on received data through the detection and delineation of patterns – and their relationships – within a sample. Hansen believes that human beings are evolutionarily hardwired to see patterns. As such, it comes as no surprise that visual patterns recur in the art of so many cultures. From ancient ceramics to contemporary anime, pattern fundamentally shapes perception.

American artist Robert Smithson famously explored pattern structures to reveal the mechanics of perception, notably in his work titled “Enantiomorphic Chambers”. Rather than reflected, the viewer that steps in front of the work sees their presence effectively cancelled through the precise positioning of mirrors, as Smithson claims, ‘eliminating the consciousness that regulates binary vision’. Combining the seemingly dichotomous languages of textile and computer code, Hansen’s new knitted works invite a meditation on pattern in a way that disrupts the compositional harmony and uniformity that is a hallmark of other textile techniques, such as jacquard-weaving or machine-knitting, with an unstable human element. While the algorithm they use is based on based on crystalline structures in homage to Smithson, their ‘patterns’ are randomised in each case to further disrupt the regularity of the textile grid.