Charles Benjamin – Not Old Not New 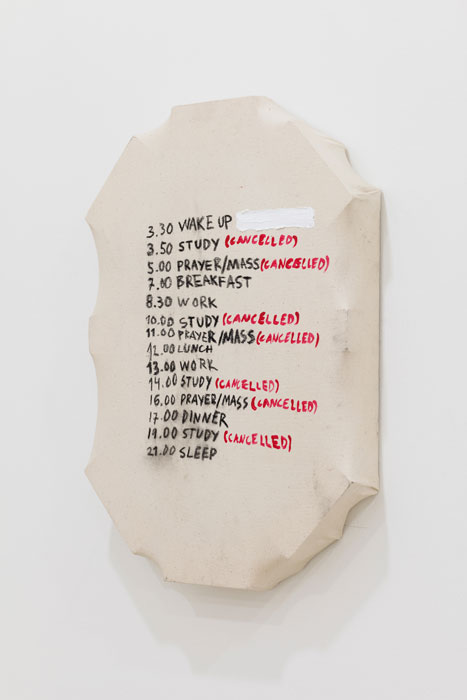 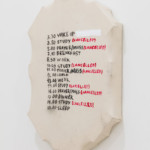 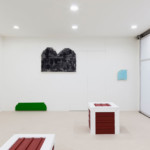 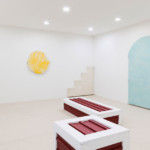 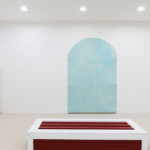 “Not Old Not New” is the title of Charles Benjamin’s first solo exhibition in Switzerland. The name of the show is inspired from a 1991 interview Martin Kippenberger had with Jutta Koether, where he said: “An artist doesn’t have to be old, he/she doesn’t have to be new. An artist has to be good.” The same approach could be applied to the medium of painting, its structure and language, and how it’s experienced today. Kippenberger’s signature process, which consists in combining unrelated image and text, his fondess for challenging style, good taste, and social conventions, is what Benjamin takes inspiration from when approaching his work. At SALTS, the artist is presenting a series of awkwardly-shaped canvases inside a space carpeted with a light beige fabric, giving the exhibition a soft and dreamy appeal. Placed on the carpet, two self-built boxes serve as benches, and are painted in the typical red and white colours of Swedish countryside houses. The sort of clumsy-looking stretchers seem like they were probably made before painting became canonised. According to the artist, they bear a utilitarian feel, a lot like Lutheran furniture. There is an awkward tension between the obvious decorative nature of the paintings and the rough appearance of their making, as if meant to to be exhibited outside. “Not Old Not New” also brings to mind a whole set of double-negations: Not paintings not sculptures, not abstract not figurative, not formal not naive, not flat notgestural and so on. One thing is certain, the anthropomorphic shapes of the canvases act like living and breathing annotations. Bringing to mind oversized note-pads, they carry scribbles and text fragments rather than the typical painter’s strokes, or signature. And yet they are full of painterly gesture, agitation and intensity. The sketching marks suggest they are in fact more about drawing and outlines than painting and forms. In fact, the notes and marks come from the artist’s observations, amassed while working his day job, at the restaurant “Burrito Baby” in Berlin’s Neukölln neighbourhood, from his rap songs, or and other findings he turns into do-to lists. The roughly assembled stretchers, made of 6 x 4 pine wood struts protrude through the stretchy cotton canvas, like a ribcage through the skin. But apart from all the physical attributes and sign functions, these works allow the artist to turn inwards and to contemplate his protestant upbringing. The absence of symbolism and figuration in religious imagery is favored for an oral and textual transmission of a belief system. The minimalist aesthetic not only represents Protestantism but also modernity and technological advancement. As such, contemplation or the idea of salvation becomes synonym with a work ethic where doing the chore; making the painting, is more important than assessing how good it is. The painting is doing its own work.

Charles Benjamin (*1989, Stockholm, Sweden) is a painter based in Berlin. He often uses his practice to explore personal problems, at once formally documenting and making fun of economical hardship, spiritual depletion, and disbelief in his own ability and the medium itself. His practice apart from painting sometimes branches out in periodical projects such as living without any basic comforts on a gallery floor for two weeks (Being a better person (And Possibly Helping Others), 2016) or sitting under a tree for the time of an average working week (Work/Work Balance, 2017). His work has been shown at New Day Gallery and Mario Kreuzberg (both in Berlin), Espacio Falso (Sangtiago, Chile) and St. Etienne Design Bienale.