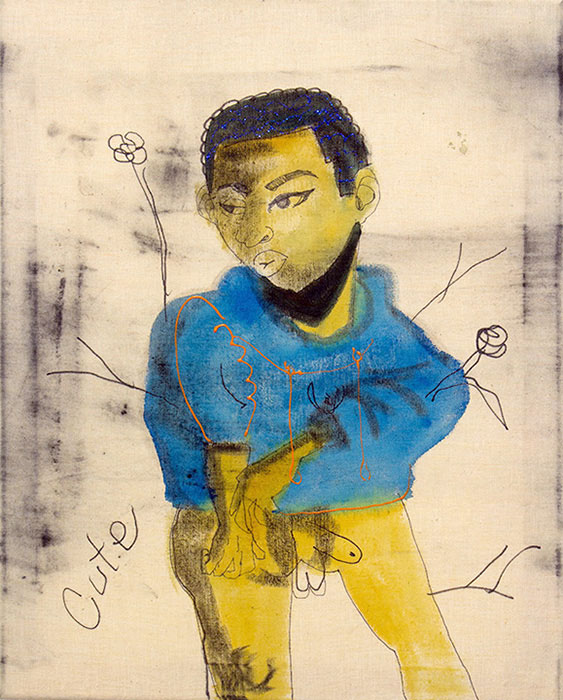 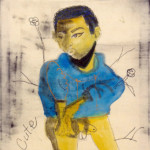 While these three artists all depict the human form, each does so in a different manner, often incorporating their own unique perspectives to portray people in novel and engrossing ways.

Jonathan Lyndon Chase creates figurative paintings that highlight the quotidian episodes of black queer men and the difficulties faced by defining one’s identity as such in contemporary society. Paintings will often feature young men in moments of intimacy and embrace, with bodies and limbs overlapping in concert with various media. In his representation of the complex narratives of queer life, Chase brings to the fore a form of self-expression that does not adhere to prescribed notions of sexuality.

While Kristina Lee also plays with human form, which in her case is often derived from found images and internet stream stills of athletes and body builders, she also studies their potential audiences. Her paintings of faces, following a tradition of Daumier’s “The Spectators,” could easily be seen as rapt crowds ogling the sportswomen, or alternatively, as stand-ins for us, the viewers. These moments of anticipatory observation also play out in her depictions of stages or gates, platforms for displaying excellence that are occasionally empty or hidden from view.

Jonathan Lyndon Chase (b. 1989), currently lives and works in Philadelphia. He holds an MFA from the Pennsylvania Academy of the Fine Arts, and a BFA from the University of the Art in Philadelphia. His work is currently on view in “A More Perfect Union?” at The Woodmere Art Museum, Philadelphia, PA. He has also recently exhibited at Romeo, Fleisher/Ollman, Thierry Goldberg, and Lord Ludd gallery. His work has been featured and written about in “Hyperallergic” and “Artcritical”, among other publications.

Louis Fratino (b. 1993), currently lives and works in New York. He holds a BFA from the Maryland Institute College of Art (MICA). He recently completed a Fulbright research Fellowship in Painting in Berlin, DE, and has also concluded the Yale Norfolk Painting Fellowship at the Yale Summer School of Art and Music in Norfolk, CT. He has had a solo show at Thierry Goldberg, New York; Platform Gallery, Baltimore; and has had his work featured in group exhibitions at 1969 Gallery and Underdonk in New York; Current Space, Baltimore; and SessionSpace, Oakland; among others. His recent solo show at Thierry Goldberg was reviewed by the New York Times.

Kristina Lee (b. 1986), currently lives and works in New York. She holds an MFA from Columbia University. Her works have been exhibited in solo shows at Garis & Hahn and Rear Window in New York. Her work has also been included in group exhibitions at Brian Morris Gallery, New York; Fjord Gallery, Philadelphia; SIGNAL, New York; and Malraux’s Place, New York; among others.