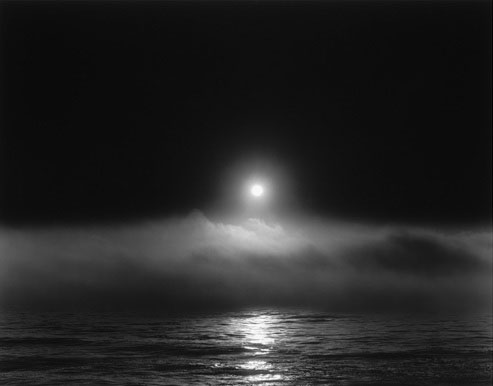 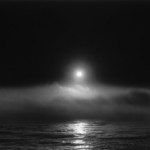 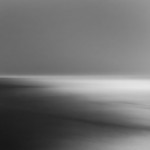 Chip Hooper once described his method: “the process of creating photographs is a contemplative one. It is an exploration of my feelings as much as it is an exploration of what I am seeing. The best images always happen when what I am feeling becomes one with what I am seeing.” The photographs presented in the Robert Mann Gallery exhibition, “California’s Pacific 2nd Set”, are perhaps the best embodiment of his process. These works evoke a visceral response, and when faced with a series of large-format photographs, it is hard not to be caught up in the whirlpool of emotion.

With the recent passing of Chip Hooper, “California’s Pacific 2nd Set” takes on new meaning. In his lifelong study of the world’s oceans Hooper sought the harmonizing moment where sea and sky become one. Two separate but equally majestic forces are seemingly joined infinitely when light unifies both bodies for one perfect moment. However in “Moonlight, Hurricane Point” the contemplative merging of sea and sky become the study of a finite moment. It is understood that this union, and really all serendipitous moments, are fleeting; the mirage will diffuse with time given the simple certainty that things change.

The ambiguous melding of the terrestrial with the cosmic become the visual representation of eternity and perhaps, for one man, a metaphor for mortality. The significance of subject matter is also transformed. If Hooper looked to capture what he was feeling, solitary waves in an expansive ocean and isolated rock formations become self-portraits. Perhaps most striking is “Evening Clouds”, where the moon fearlessly shines out of black night and is carefully cradled over a glassy sea by the exact horizon Hooper was fascinated with capturing. The contemplative response to the works of Chip Hooper is as important to the audience as it was to the artist.

Chip Hooper (1962 – 2016) was born in Miami, and raised in Chicago. His relationship with bodies of water began at an early age, experimenting with photographs of Lake Michigan. He would eventually turn his focus to the world’s oceans using his large-format 8 x 10 inch view camera. His work is in permanent collections at the Philadelphia Museum of Art, Cleveland Museum of Art, Santa Barbara Museum of Art, Museum of Fine Arts in Boston, Monterey Museum of Art, Portland Museum of Art, and the Tokyo Photographic Cultural Center, and has been featured in The New York Times, The New Yorker, ARTnews, The Oregonian, and the San Diego Union-Tribune, among others.