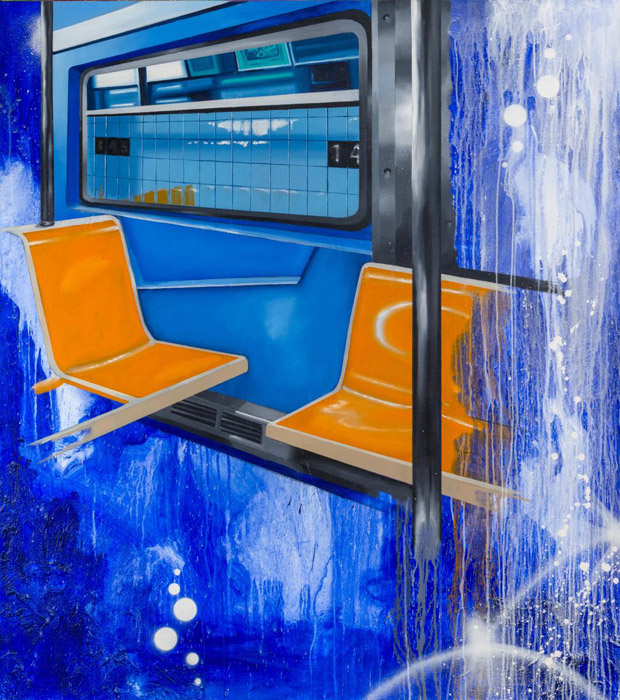 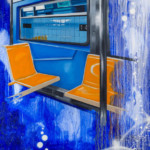 P·P·O·W is pleased to present the gallery’s first solo exhibition with Chris Daze Ellis. “Daily Commute” will feature paintings, drawings, and pastels that reflect Daze’s exploration of and reflection on New York City, a subject that has always permeated his work. Daze first gained notoriety as a teenager in the late 70’s and early 80’s for painting on subway trains and city streets, before transitioning to painting on canvas and showing at alternative and established art spaces around the world.

“Daily Commute” will feature works in multiple mediums, including spray paint, oil, acrylic, and ground pumice, often all used within the context of a single painting. Daze’s works simultaneously capture the energy and spontaneity of the graffiti movement, while also revealing a more meditative process and technique, with works featuring thick brush strokes and a layered use of paint that pay homage to artists like Willem de Kooning, Franz Kline, and Joan Mitchell.

The works on view capture the day to day scenes that together comprise life in New York City – the interior of a subway train, a subway platform, Times Square on a snowy evening, a streetscape in the Bronx or Brooklyn – revealing both the artist’s personal history while also creating a capsule of a particular moment in time. The paintings and drawings on view reflect the diversity and complexity of the city, often through layered works that evoke the true character of a place. With works like “Eastern Parkway”, Daze brings into a single frame the oversized eyes of a passerby witnessing the scene, a Hasidic man exiting a Subway stop, a Caribbean woman running errands – all set against the background of “Eastern Parkway”. The works take the form of snapshots captured in an abstract frame, reflecting Daze’s position as an ever-observant artist and his experiences as a native New Yorker collecting memories to reinterpret and depict.

Chris Daze Ellis (b. 1962) lives and works in New York City. He is represented in the permanent collections of The Museum of Modern Art, New York; The Brooklyn Museum; The Museum of the City of New York; The Groninger Museum, Netherlands; and The Ludwig Museum in Budapest, Hungry. In 2015 he was the subject of the solo exhibition “The City is My Muse” at the Museum of the City of New York, and in 2014 the exhibition “Street Talk: Chris Daze Ellis in Dialogue with the Collection” was on view at the Addison Gallery of American Art at the Phillips Academy, Andover, MA. He has been included in solo exhibitions around the world, including in Europe, Asia, South America, and throughout the U.S. His work has been exhibited in commercial and alternative galleries around the world since 1981, including at: the Museum of Contemporary Art, Los Angeles; The Grand Palais, Paris; Bronx Museum of the Arts, New York; The Edgewood Gallery at Yale University, New Haven, CT; the Wadsworth Atheneum, Hartford, CT; and the Foundation Cartier, Paris, among many others. In 2015 Schiffer Books published “Dazeworld: The Artwork of Chris Daze Ellis”.