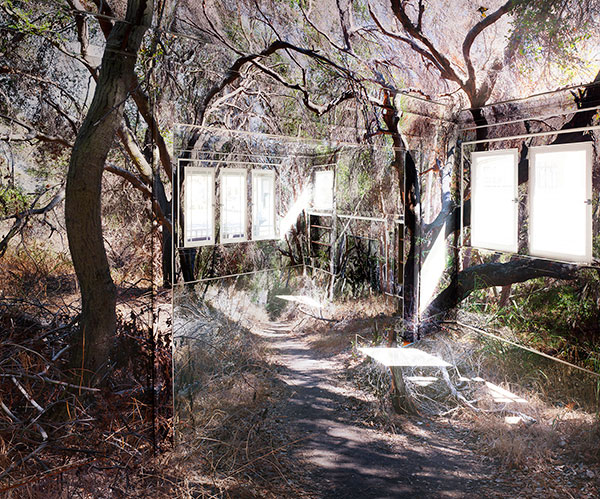 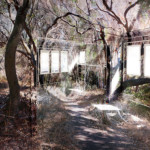 Luis De Jesus Los Angeles is very pleased to announce “Chris Engman: Prospect and Refuge” the artist’s third solo exhibition with the Gallery, to be presented in Gallery 1.

According to Jay Appleton’s theory of prospect and refuge, two of our most basic and deep-rooted needs are for opportunity and shelter. We are attracted to those landscapes or environments that would seem to afford both, and we are wary of those that would seem to withhold either. This plays a role, if an unconscious one, in our experience of the environment and in our aesthetics.

In his exhibition “Prospect and Refuge”, Chris Engman continues his investigations into the medium of photography. He also returns to his roots with the use of imagery from nature, often combining this with architectural imagery to bring the outdoors in and the indoors out. Natural light is combined with artificial light, geometry is combined with wilderness, and, as always in Engman’s work, the relationship between illusion and materiality is explored. In the process this work considers and questions notions of habitation, landscape, and the natural environment.

Engman’s process entails selecting a site in nature – often during a hiking or camping trip – and carefully documenting it from a single perspective over multiple visits. Then, upon his return to the city and his studio, he prints the images and uses them to line the surfaces of different interior spaces (including his studio and the living and dining room of his own home) in effect, recreating the site in an indoor location and thereby bringing the wilderness inside. Other images within this exhibition were shot entirely outdoors.

The landscape in “Containment” was photographed during a hike at The Narrows at Zion National Park in Utah, whose cliffs were carved out by the Virgin River over the course of 13 million years. The canyon acts as a container for the river, directing the flow of water, yet ultimately fails to contain the river since it is cutting through rock and moving it out to sea. In this photograph of a photograph, the canyon and river have been reduced in scale to fit into and be contained by the walls, ceiling and floor of his studio, and the single perspective of the landscape has been laboriously reconstructed onto more than 200 surfaces. The logic of the two spaces overlap, sometimes agreeing and sometimes colliding. A photograph, here and by analogy, tries and fails to be a container for moments and places.

Chris Engman lives and works in Los Angeles. He earned his MFA in 2013 from the University of Southern California and his BFA from the University of Washington, Seattle, WA. He has participated in solo and group exhibitions at 68 Projects, Berlin; Luis De Jesus Los Angeles; High Desert Test Sites, Joshua Tree; Project B, Milan; Galerie Clair, Munich; Flowers Gallery, London; Greg Kucera Gallery and SOIL Gallery, Seattle; and Roski Fine Arts Gallery, University of Southern California, Los Angeles, among others. Most recently, Engman’s work was included in “Second Sight” at the Torrance Museum of Art; “Staking Claim: A California Invitational,” at the Museum of Photographic Arts, San Diego, and “NextNewCA” at the Institute of Contemporary Art, San Jose, CA. In 2018, he will be the subject of a survey exhibition at the Pasadena Museum of California Art. Chris Engman’s work is included in the collections of the Orange County Museum of Art, Newport Beach, CA; Houston Fine Arts Museum, Houston, TX; Sir Elton John Collection, Atlanta, GA; Portland Art Museum, Portland, OR; Seattle Art Museum, The Henry Art Gallery, and the Microsoft Collection, Seattle, WA.