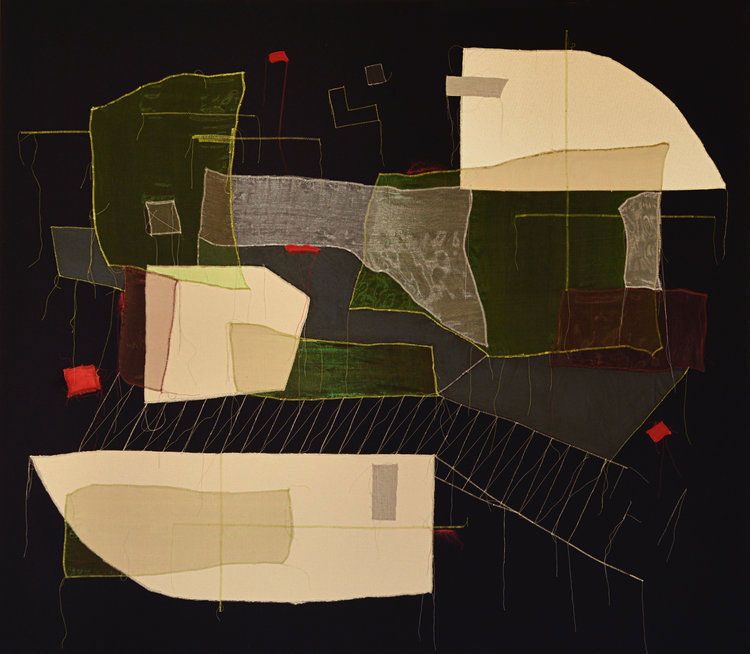 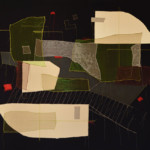 Jane Lombard Gallery is pleased to present Christine Gedeon’s first solo exhibition with the gallery, “Syria… as my mother speaks”. Gedeon was born in Aleppo, Syria and raised in the U.S. The show consists of three bodies of work that draw from the artist’s memories and her family’s experiences in Syria.

The centerpiece of the exhibition “Syria… as my mother speaks” is an interactive playable “string instrument,” connecting strands of string to the interior of a space, and when triggered, plays sounds and snippets of stories and conversations with her mother (mainly in Arabic), centered around the war in Syria, her relatives there, and her mother’s memories before the war. The exhibition additionally features fifteen works on paper, called “Aleppo: Deconstruction | Reconstruction” and four stitched fabric canvases.

In “Syria… as my mother speaks”, Gedeon, realizing that the war naturally and continually came up when speaking with her mother, and how personal their stories were, she felt she needed to share them. The artist had relatives in Aleppo and Damascus that were impacted by tragedies brought on by the civil war, and the stories that one would hear on the news were actual events affecting her family. Gedeon worked with Danish sound artist, Bent Bøgedal Christoffersen, where he layered conversations against a backdrop of the sounds of war, chants, and traditional Syrian songs. The instrument plays similarly to a harp, each string triggers different points in the sound collage, allowing listeners to enter into an ongoing narrative.

“Aleppo: Deconstruction | Reconstruction”, is a series of 15 works on paper exploring places in Syria (mainly Aleppo) that are part of the artist’s family history. The themes range from the quotidian to devastating, forming an Aleppo otherwise only reached through memory. Focusing on the destruction of the city through this civil war, and wondering if these places still exist, Gedeon enlisted the help of her family members to locate these sites as a way of solidifying the disappearing landscape. She found the locations on Google Earth and created digital drawings as a foundation, simulating areas destroyed by bombings, and worked over them with tape, pencil, and thread. Each work sits alongside text reading as part of a story with excerpts of memories, mainly from her uncle and mother, of these places defining what may no longer exist.

The stitched works, which incorporate thread, fabric and paint on black canvas, are taken from Gedeon’s memory of visiting Aleppo and Damascus in 2006 combined with imagining what they would look like today, after the destruction. They are neither true abstractions, nor complete landscapes but navigate between interpretative poles.

Maps and urban planning have been a topic in Gedeon’s work; here she works with the concept of connecting memory through location and using maps to point to a forensic investigation of her families histories and tragedies. She investigated the process of rebuilding and how people define themselves in relation to a constructed environment. Buildings in the urban context interact with one another and allow individuals to create a narrative of identity – past, present, and future. By using these maps of locations in Syria, which will ultimately change, Gedeon creates a blueprint of what once was and what will most likely disappear.

The war in Syria is a tragedy on a global scale and the conflict is a reminder of the individual histories and homes that are being erased along with cities and their architecture. It is a crushing realization that the place Gedeon is from no longer stands as it once was.

Christine Gedeon was born in Aleppo, Syria, raised in the US, and lives and works in both Berlin and New York. She shows internationally and has received commissions to create site-specific installations. Her awards include a grant from The Harpo Foundation, 2016, The Bronx Museum (AIM 30) program, 2011, and an Emerging Artist Fellowship from A.I.R. Gallery, NY in 2005-6. She was also selected as the artist to represent the 2000s with a solo show at A.I.R. Gallery’s 45th anniversary show in 2017. Her work has appeared in Hyperallergic, Art in America, The Dallas Morning News, and featured in the book “You Are Here: NYC: Mapping the Soul of the City”, by Katharine Harmon.