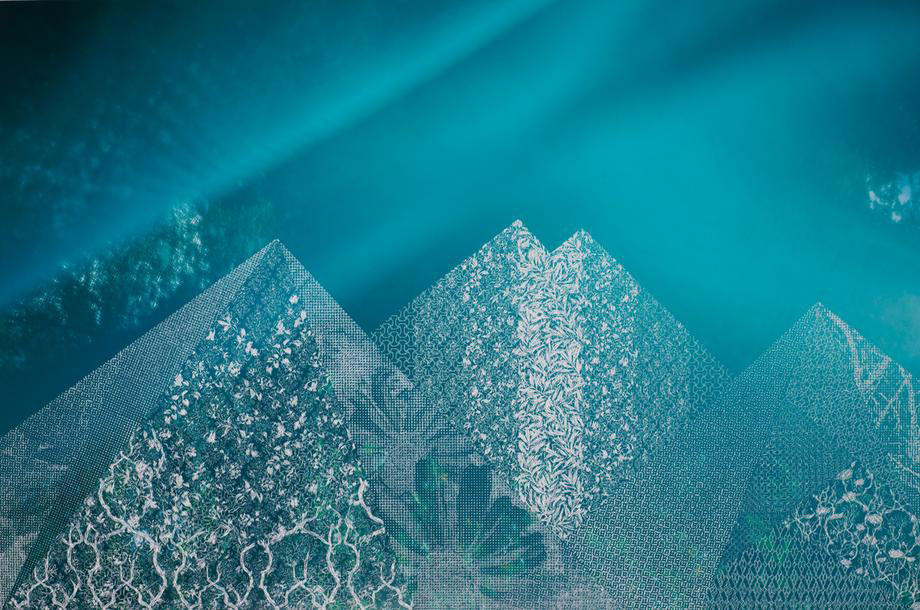 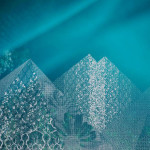 For his second solo show with the gallery, the artist has created a series of manipulated landscape photographs. Using a colored veil over the camera lens, the original prints are fuzzy impressions of forest scenes – seemingly underwater, awash in blood, or encased in amber. Russell then scrapes, gouges and scratches the surface of these prints with intricate, overlapping swaths of pattern. The individual marks are violent disruptions to the pristine surface of the print, a romantic impulse invading the field of mechanical reproduction, revealing the bright white glow of the paper’s inner core.

The space of the photograph, already illusory, begins to alternate between visual systems. Repeating patterns are used as stand-ins for personal and abstract sets of values. Unlike Victorian flower codes, with rigid definitions assigned to specific flora, the meanings of patterns are individual and fluid. They line interiors, envelop bodies and provide a glimpse of an ersatz infinity – the valiant attempts at replication falling ever short of the real thing. In the drawings, patterns are chopped into awkward, intersecting ribbons, free flowing signifiers jammed against each other and into the shapes of mountain peaks. The result is both destructive and revelatory – the patterns bringing to life the photographic subject’s inner world, or suggesting at the vast potential therein.

Russell (b. 1974) received his M.F.A. from the Art Center College of Design (CA). In 2009, he produced a solo exhibition at the Hammer Museum (Los Angeles, CA). He has also been featured in group exhibitions at the Tokyo Institute of Photography (Japan), The Norton Museum (West Palm Beach, FL), Armory Center for the Arts (Los Angeles, CA), White Columns (New York, NY) De Appel Arts Center (Netherlands) Oakland Museum (Oakland, CA), Los Angeles County Museum of Art (Los Angeles, CA), among others. He has published numerous critical articles in addition to being a featured subject of positive review by the Los Angeles Times, New York Times, Huffington Post, Artillery, Frieze, and ArtForum, among others. Russell is also known for his ‘zine Bedwetter. His first novel is Sniper, and other books include Budget Decadence (2nd Cannons Publications), Pattern Book (Insert Blanc Press) and Landscape (Kolapsomal Press)–which was included in Martin Parr’s The Photobook: A History Volume III (Phaidon). His work is included in the collections of numerous public institutions including the Brooklyn Museum, Museum of Contemporary Art, Chicago, Museum of Contemporary Art, Los Angeles, Museum van Hedendaagse Kunst Antwerpen, Jordan Schnitzer Museum of Art – University of Oregon, Rhode Island School of Design Museum, Hammer Museum, Museum of Fine Arts, Houston, and the Tokyo Metropolitan Museum of Photography, to name a few.