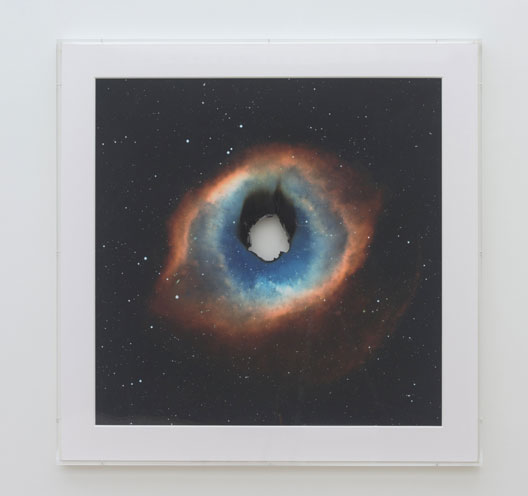 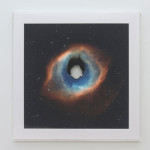 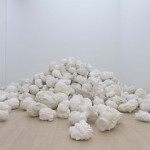 Simon Lee Gallery is pleased to announce the first exhibition in Hong Kong by renowned Italian artist Claudio Parmiggiani. Associated with the Arte Povera and Conceptual Art movements, Parmiggiani’s work resists a firm connection to both. Themes of absence, the inevitable passage of time, fragmentation and ordeal recur throughout his practice and are essential to his oeuvre, as too does his concern with the power of memory, poetic images and shared history. Parmiggiani’s practice demonstrates a profound interest in our artistic, historical and moral past. Deeply personal meditations on life and death, the power of reflection and feelings of the sacred are realised in concrete objects, photographic and painted images, and in his signature “Delocazioni”, made with fire and soot on canvas.

At the centre of the exhibition is an assemblage of plaster heads, installed like a mass of remains on the gallery floor. In this work, Parmiggiani engages with classical iconography and fragments of antiquity, using the figures and motifs of an imaginary archaeology to rewrite and evoke the effect of ancient ruins. Another new work consists of paper painted with the constellation of the stars and pierced with a burn. Its materials are charred but memories of their presence remain. Moving between homage, transgression and estrangement, the echo of the ancient world is charged with mystery as the artist gives form to ephemeral notions of time, silence, memory, absence and dreams through sculptural installations, paintings and “Delocazioni” that resonate with imaginative tension.

Using relics, fire, ashes, pigment, dust, shadow, Parmiggiani’s work is exquisitely and brutally material but retains the longing for a transcendent dimension, a desire to render infinities, abstractions and what is burrowed in the world but nameless and without noise. First exhibited in 1970, Parmiggiani’s iconic “Delocazioni” use powder, smoke and fire to make shadows and imprints on paper and board. In order to create his “Delocazioni”, Parmiggiani builds an installation and sets it on fire through the combustion of tyres. When the objects are removed, what remains are their negative outlines in soot, revealing their trace and memory, silhouettes immortalised using smoke. In this landscape of shadows and light, bodies and objects, the whole universe of life is evoked in absentia.

Claudio Parmiggiani was born in Luzzara, Italy in 1943. His first major exhibition was held at Liberia Feltrinelli, Bologna in 1965. Parmiggiani’s work has been widely exhibited in international museums and collections. His work has been shown six times at the Biennale de Venezia (1972, 1982, 1984, 1986, 1995 and 2015). A retrospective of his practice between 1960 and 1995 was held at the Musée d’Art Moderne et Contemporain, Geneva (1995). Recent solo exhibitions have been held at Galleria d’Arte Moderna di Bologna, Bologna (2003), The Grand Palais, Paris (2005), The Musée des Beaux-arts de Nantes, Nantes (2007), Collège des Bernardins, Paris (2008), Palazzo del Governatore, Parma (2010) and Fondazione Bernareggi, Bergamo (2014). His work was recently included in the major group exhibition ‘Post Classics: The revival of antiquity in contemporary Italian Art’, curated by Vincenzo Trione in the Roman Forum Palatine, Rome (2014) and Unlimited, Art Basel, Basel (2013). In June 2015, a permanent installation of his work was unveiled at Villa Medici, Rome.