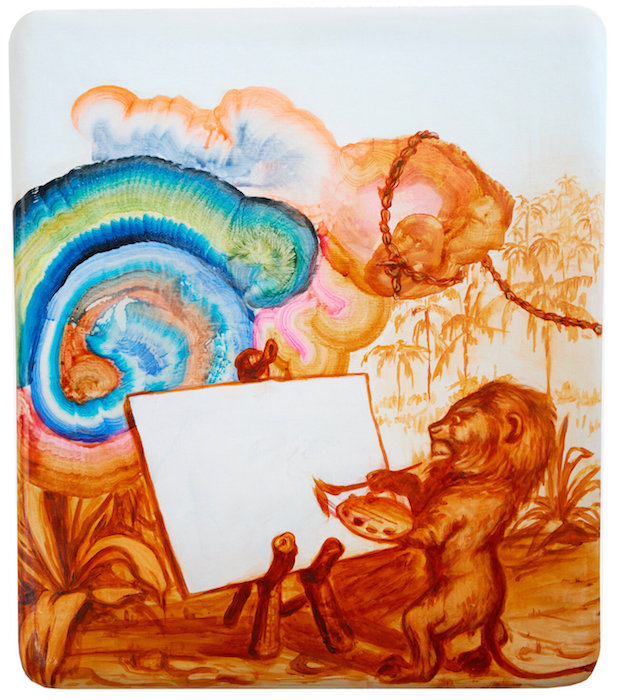 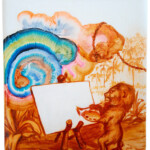 “Cockroach or Queen?” is an exhibition that explores the relationship between self and the world, be it between the self and a person (other), a process, a métier or a system. The title “Cockroach or Queen?” is taken from the title of an article in Newsweek in 1973 that was on Hesse back in the day and was meant to convey Hesse’s sensation of being both inferior and superior. In our economy of attention, the production of persona is widespread and there is a claim that pop culture has made society ever more narcissistic. How is aura created? How is a character created? Can self-infatuation be a site of resistance? Has narcissism become a cultural norm?

Celebrities pay “fake” paparazzi to heighten their celebrity status and social media influencers perform an identity that is both meticulously crafted and dangerously addictive. “Cockroach or Queen?” is an exhibition that interweaves ideas about mythmaking, authorship, the artist persona and the noble act of paying homage. Some of the works are autobiographical in nature and provoke thoughts about publicness, intimacy and the private. Others are a more direct response to the world of celebrity culture and stardom. What happens when this falls into a slippery and oscillating spectrum between feeling inferior and superior? The exhibition presents this inverse logic: Who is actually the one enjoying the spectacle, is it the protagonist or the audience?

“From the time my working with Eva Hesse ended, I knew that my ambition was to become a sculptor in my own right – a Great sculptor!” Doug Johns (artist featured in the exhibition)

“…He coldly regards himself as a malleable object, and rejects any notions of (self) certainty in order to become someone, or even something, artificial.” – “No Dandy, No Fun” Press text for Kunsthalle Bern, 2020-21

“It’s not about any specific place it’s about placelessness… The intrigue it generates doesn’t come from its rarefied objects but the players.” – Sean Monahan on the artworld and his lurid fantasies of a reality TV show featuring art celebrities in his essay “Ship of Fools”, Spike Magazine, Winter 2020/21

“What did Maia mean last night when she said that if you had a phobia, your phobia would be being afraid of other people?” You become responsible for other people. The position I’m in now, I’m responsible for a hell of a lot of things to do with the art world. What I do affects the course of art. I don’t mean it in an arrogant way.” – Damien Hirst

“Today, Ms. Trump has achieved her childhood goal. Being photographed. Being seen. Being noticed. The more outrageous her dress sense, the more press she gets. Like her husband, I think the only thing that really stirs her is attention. I don’t think she’s malevolent. Still less a martyr. I just think she’s a narcissist, a slightly clapped-out model who will still do anything to get herself that cover.” – Jo Ellison in “Malevolent, martyr or moron? Unpicking Melania Trump”, Financial Times, 2018

“He was one of the more difficult people in the world… an angry and difficult man… He could never sell himself.” – Quotations about Peter Hujar from, respectively, “Interview with Fran Lebowitz”; Stephen Koch, “Peter Hujar and His Secret Fame” and “Interview with Vince Aletti”

“According to recent cultural criticism, Narcissus has replaced Oedipus as the myth of our time. Narcissism is now seen to be at the root of everything from the ill-fated romance with violent revolution to the enthralled mass consumption of state-of-the-art products and the ‘lifestyles of the rich and famous’.” – Jessica Benjamin (2000), “The Oedipal Riddle,” p. 233

– “Our worlds coexist and don’t really need to meet.
– They are offering me an opportunity for involvement. It’s like accepting an inescapable presence, a hectoring insistence
– What does it mean, to become uncomfortable neighbours? Their intentions must have felt like fast trains passing in a tunnel.
– …The effect was unpleasant like artists talking over one another competing for your attention.
– … It’s like being trapped in a lift with an enraged placard waving drunkard screaming political slogans in your ear!!”
– Excerpted text from the monologue of “VISIONARIES & VOYEURS, II” (2009), a video work by Vittorio Santoro

“Those who court celebrity must be prepared to pay the price.” – Cambridge Dictionary entry for the word “notoriety”

“The author of the book “The Selfishness of Others” exercises successful restraint in avoiding the acute sense of self-centredness often found in a book-length essay written by a literary ingénue. ‘Any book you write is its own asylum,’ Dombek notes self-consciously, ‘but a book about narcissism is like the padded cell inside the asylum.’ Amidst this suggestive dodging and weaving, Dombek manages to take a position, revealing what anyone who has served a decent amount of time in psychotherapy should know: that our collective human tendency to project, blame, accuse and diagnose others – especially where narcissism is concerned – is actually a thinly veiled compen­satory gesture for our own deeply flawed personalities.” – Sarah Hromack in “Narcissism in the Digital” Age, Frieze, December 2016

“With typical nonchalance and acumen, Brainard described the exhilaration he felt while working on his new project in a letter written that summer to poet Anne Waldman: “I am way, way up these days over a piece I am still writing called I Remember. I feel very much like God writing the Bible. I mean, I feel like I am not really writing it but that it is because of me that it is being written. I also feel that it is about everybody else as much as it is about me. And that pleases me.” –Paul Auster

“I remember when I thought I was a great artist.” – Joe Brainard

“I remember a dream I had recently where John Ashbery said that my Mondrian period paintings were even better than Mondrian.” – Joe Brainard

“I’m always terrified that someone will realize what a mess there is in my mind, and they’ll forever prohibit me from hiding myself, but I don’t think this can happen in the art world, which is why you can say anything you like here. That’s what makes it reassuring. Perhaps that’s why the art world appealed to me so much! It seemed like a good place to set my obsessions aside and, without raising any suspicions, even to turn them into a profession: that of an artist! Actually, I don’t think I really like exhibitions, or rather I don’t think I’m interested in the way they’re put together. It seems to me like a perverse activity carried out by good people. The first time I saw Sophie Calle on television, I was just amazed because it seemed to me that she too was using the art world to disguise herself into something less problematic. In the end, perhaps this thing of being an artist just makes you feel more comfortable when you see yourself in the mirror in the morning.” – Alfredo Aceto in “Conversation with Andrea Bellini”, 2015