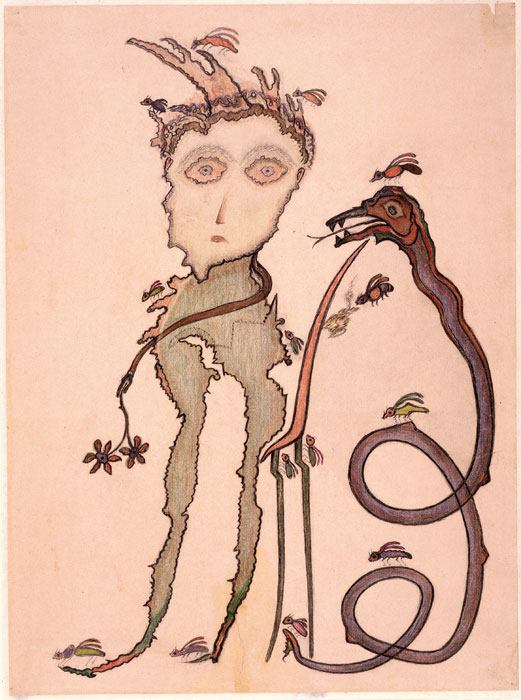 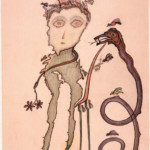 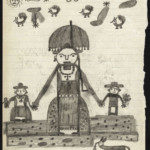 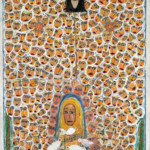 “Art Brut” is receiving more attention internationally now than ever before. An exhibition at the Aargauer Kunsthaus is taking a look at this art, described by painter and collector Jean Dubuffet as “raw diamonds”, and its close connection to Switzerland. The exhibition is produced by the Collection de l’Art Brut and realised in cooperation with the Aargauer Kunsthaus. It assembles roughly 200 paintings, drawings and assemblages by twenty­two Swiss artists from the Collection de l’Art Brut, complemented by works from the Aargauer Kunsthaus. Sometimes wildly and freely gestural, sometimes meticulous and detailed, the works focus on man, nature, architecture and emblematic imagery.

Art Brut has long taken on intercontinental scope: Nowadays, there is a global search for new discoveries in the field, and form and terminology in the realm of Art Brut are the subject of recurrent and controversial debates. One origin of this interest lies in turn­-of-­the-­century Europe: Social and political upheavals in the first decades of the twentieth century made artists (whether Dadaists, Surrealists or Expressionists) and intellectuals reject traditional academic guidelines in favour of an anti­classical aesthetic. The unconventional artistic expression of inner images, fantasies and feelings became a catalyst of modernism. Many avant­gardists found a source of inspiration in the art of other cultures as well as in the “Artistry of the Mentally Ill”.

In 1945, the French painter and collector Jean Dubuffet travelled various language regions of Switzerland, always on the lookout for forms of artistic expression being pursued independently from the official art market and established trends. In museums and particularly in obscurity – in hospitals, prisons and psychiatric clinics ­ he encountered individuals who were developing their very own creations insulated from academic models and stereotypes. He used the term art brut (French for “raw” or “rough art”) to describe these intuitively and autodidactically evolved art forms. In 1971, he donated a large part of his collection to the City of Lausanne, which, in 1976, gave rise to what is now the internationally renowned Collection de l’Art Brut.

Following its first presentation at the Museo di Ascona (under the title “Art Brut – Swiss Made”, 4.7 – .­21.10.2018), the Aargauer Kunsthaus is showing an adapted version of the exhibition supplemented by works from the museum’s own collection (Walter Arnold Steffen, Aloïs Wey and Adolf Wölfli, among others) under the title “Collection de l’Art Brut. Art in Obscurity”. This joint project with the Collection de l’Art Brut reflects the longstanding concern of the Aargauer Kunsthaus to look not just at established Swiss art but also at artistic production on the margins (consider, for instance, the two “Outside” exhibitions in the 1980s under then director Heiny Widmer, or the 2015 show “Auf der Grenze” curated by Thomas Schmutz). The exhibition features works from the canon of Dubuffet’s collection, including by Julie Bar and Berthe Urasco; art by patients of the Cery Bel­Air asylum that was donated to Dubuffet by its former director, the physician Charles Ladame; works by Adolf Wölfli and Heinrich Anton Müller to which Dubuffet was introduced at the Waldau psychiatric clinic in Bern by Walter Morgenthaler, a doctor there. Other artists such as Benjamin Bonjour, Hans Krüsi, Martial Richoz, Armand Schulthess, Gaston Teuscher, Gaspard Corpataux, Justine Python and Anne­Lise Jeanneret became part of the Lausanne collection from 1976 on thanks to the collecting efforts of curators Michel Thévoz and Lucienne Peiry. Sarah Lombardi, since 2012 director of the Collection de l’Art Brut, has continued the collecting activities to this day and included contemporary artists such as the Lausanne­based Diego into the collection as well as the exhibition.

In addition to aiming to show the wide variety of individual styles of the Art Brut artists, the artist also draws attention to recurring groups of themes. Accordingly, the exhibition is organised thematically, starting with the emblematic figures of Aloïse Corbaz. Inspired by fairy tales and operas as well as by her work as a nanny and seamstress at the imperial court of Wilhelm II, Corbaz has princes, heroes and fairy­tale figures dance across thin sheets of packing paper. Dense ornamentation evoking heraldic imagery and Bern folk art characterises the work of Adolf Wölfli. Julie Bar and Jules Doudin draw humorous picture stories of animals, humans and mythical creatures on notebook paper and small slips. An encyclopaedic or conceptual proclivity for a meticulous or graphic use of line and surface is apparent in the works of Martial Richoz and Diego. Those of Aloïs Wey and Benjamin Bonjour confront us with collaged and painted imaginary palace architectures. This colourful world continues in the vegetal and animal landscapes of Samuel Failloubaz and eventually leads to the images du pays of Hans Krüsi who at times used uncommon materials such as milk cartons as painting grounds. The show concludes with raw gestures as well as writings relating to the artists’ own selves, as reflected in the handwritten protests of Justine Python, the convoluted figures of Gaston Teuscher or the mask­like assemblages of Angelo Meani.

Embedded in the midst of the exhibition is a kind of “satellite space” featuring large­scale, crystalline drawings on graph paper. They are the work of Emma Kunz. This Aargau artist should not be seen as an Art Brut artist. Rather, the aim is to create a quiet space of refuge and encounter to reflect on art, its classification in categories and canonisation. What distinguishes established modernist art from Art Brut? The work of Emma Kunz has arrived in academic and museum circles, even though to the artist herself viewed her drawings more as a research tool and resource for her work as a healer. A pendulum guided her in her intuitive creative process. The drawings are said to have helped her render invisible energies and larger connections intelligible. In purely formal terms, there are apparent parallels to the systematic pictorial geometries of a Diego, the distinction, however, lies in the biographical and intentional categorisation of the artworks and their creators. In this context, Emma Kunz may serve as an inspiration to question the demarcations between genres.

The meeting of the Aargauer Kunsthaus and the Collection de l’Art Brut thus holds great potential: two historically grown collections enter into a dialogue and allow us to reflect, in an institutional framework, candidly and critically, with a view to the past and the future, on Swiss art and its supposedly linear and clear categorisations.

An additional discourse window (or “satellite space”) features works by the artist and healer Emma Kunz from the collection of the Aargauer Kunsthaus.

In conjunction with the exhibition “L’Art Brut – Swiss Made”, the Collection de l’Art Brut in Lausanne prepared a publication in cooperation with the Aargauer Kunsthaus in Aarau and the Museo Comunale d’Arte Moderna di Ascona. Published in German, Italian and French, the volume includes selected reproductions, a foreword by the directors, Sarah Lombardi, Mara Folini and Madeleine Schuppli, an introductory text by Sarah Lombardi and short biographies of all artists from the Collection de l’Art Brut included in the exhibition.