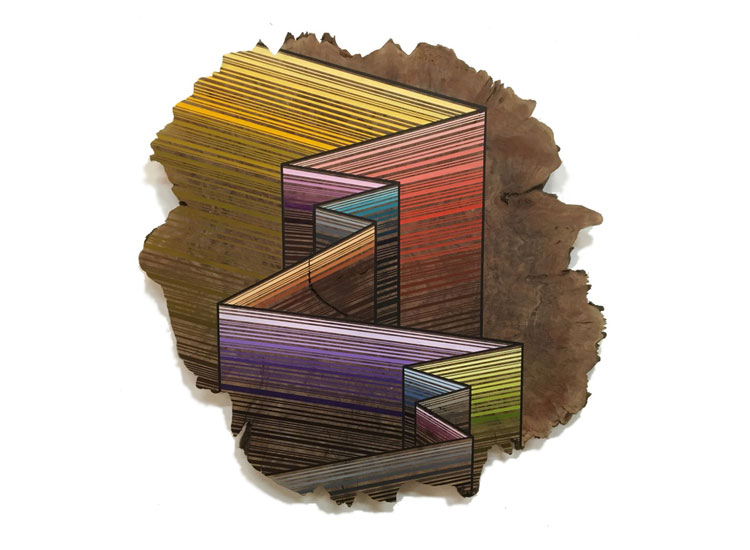 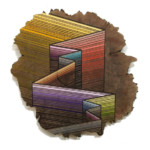 Cey Adams, an artist himself, brings a focused eye to this exhibition, uniting individual works and artists into a narrative of material exploration. Each featured artist shares a commitment to a deeper exploration of texture and surface through a variety of source material and media. Paper, textiles, beads, paint, and found objects are intricately and painstakingly worked into compelling narratives and manifestations of broader commentaries on contemporary culture, identity, and modern life.

Olivia Baldwin works intuitively, immersing herself in the landscape of her home in upstate New York. Merging line, form, and color, she slowly builds richly layered paintings through a meditative and spontaneous process.

Rachel Beach’s sculptures distinctly echo the concrete verticals and horizontals of the gallery space itself, but their strictness of form is countered by a sense of mischievous joy via their painted surfaces. Beach’s rigorous approach to painting revels in textures and colors that manifest pure playfulness and spirit, even creating trompe l’oeil moments that are directly in dialogue with the wood materials she builds with.

Samantha Fields weaves fiber and beads into large-scale sculptural works, creating complex narratives with her hands, absent of language and figuration. Instilled in the process of weaving the works are reflections on class and gender, as the labor to produce each piece becomes part of the work itself.

Kira Nam Greene’s work is deeply personal, with an intensive process of layering collaged images of food and intricate patterns which represent the plurality and multiplicity of her own Asian American female identity. She works between abstraction and figuration, using layers of gouache, watercolor, and pencil to create work that is at once loose and playful, yet scrupulously detailed.

Jason Middlebrook uses sliced sections of wood as an organic, sculptural canvas on which to paint intricate abstract works. His colorful geometric patterns play with the unique curves, undulations, and knots of the wood’s surface, resulting in an unexpected conversation between organic form and painterly gesture.

Carmen Neely combines painting and found objects to create works that reference sexuality, gender, and the body. Neely is deeply aware of her own context, inserting her identity as a young black woman into a larger conversation about signification in painterly abstraction. Born out of her painterly obsession with gesture, every mark is a vital component and acts as its own self-contained character, each form acting as a subtle subversion.

Ian Wright embraces unconventional materials generally not associated with portraiture, including salt, cassette tape, buttons, beads, luggage labels, paper cups and drawing pins. His practice is a continuation of his exploration into the re-use of the easily available and deliberately inexpensive, as well as the unpredictability that these materials offer.

For Adams, it is important to exhibit artists who are deeply engaged with both their medium and their era, dealing with traditional artistic concerns as well as the issues we face in everyday existence. He is, as he notes, “compelled by artists who make work as a metaphor for life” and enjoys creating dialogue among those in different stages of their career and practice. On the mural wall of Jane Lombard Gallery’s outdoor exhibition space, Cey Adams will create a site-specific mural in conjunction with the opening of “Contexture”.