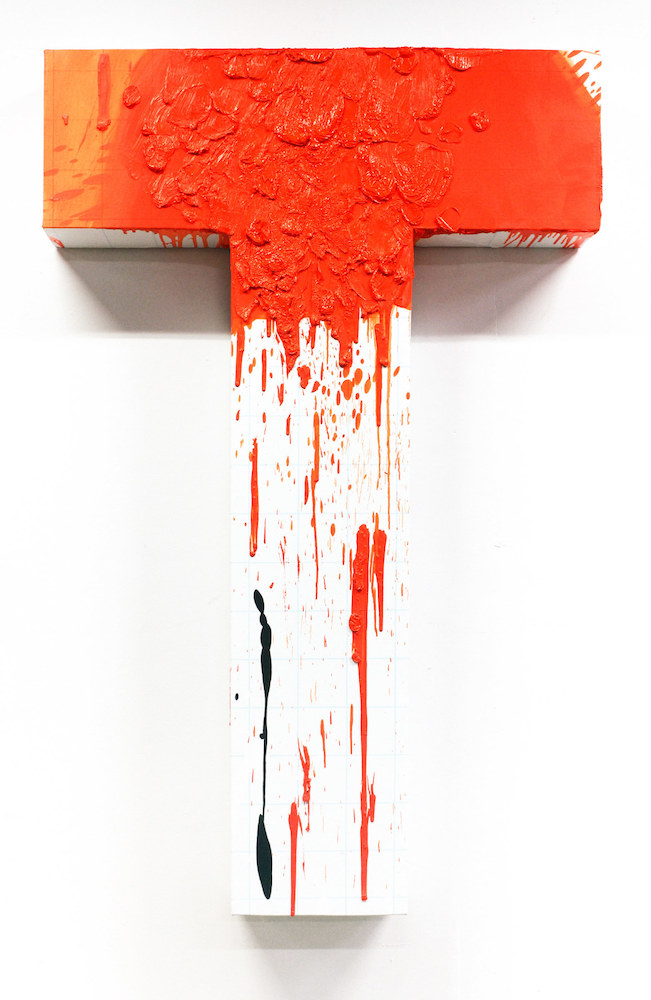 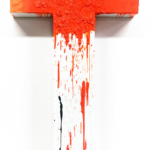 Freight + Volume presents “Merchant, Mistress, and T”, an exhibition of recent works by Craig Drennen. T stands for Timon – the protagonist of Shakespeare’s least influential, and arguably worst play. But against the backdrop of this ill-fated work, Craig Drennen has discovered a way to stage original works that mirror our world more than Shakespeare’s. Drennen’s paintings are possessed by an autonomous agency. As cultural signifiers they allude back to the tragedy of Timon, as much as they recreate the story of our own times. Items of cultural debris – such as campaign buttons, vinyl records, and Christmas ornaments – all come to be viewed through a fish-eyed lens which enframes our world as tragedy and farce equally.

“Merchant, Mistress, and T” leans less on the legacy of Timon as a Shakespearean figure than on Shakespeare’s proclivity to reimagine history. In Drennen’s series of “T” paintings, such as “T16”, the content of the work is, on one level, the fictional protagonist of Timon. On the other, as it rests against the wall, this T-figure almost resembles a crucifix. The gory, visceral paint adorning “T16” is neither crimson, wine-dark, or vermillion. It’s fluorescent orange, which introduces a novel color variant into the annals of art history.

Another work, (“Convoy LeFreak”), looks back to (among other things) the symbolism underlying the transference of value. A round quarter, for instance, goes into the jukebox, setting off the circular motion of the record player, which is then loaded with a vinyl disc from which music emanates. Underlying all this is the mythos of a circle; only in (“Convoy LeFreak”) this mythos comes to encompass the campaign button of a small town political candidate, along with actual records and clocks – all of which suggest a kind of axial rhythm cutting through our awareness of synchronicity, repetition, and allusion.

The barrage of information and multi-tiered allusions Drennen’s paintings capture are less about “Timon of Athens” than the way different planes of experience can seem connected by some subordinating process. It’s as though there’s a hidden recess of experience, perpetually displaced by the butterfly effect, where “Timon of Athens”, a play reviled even in Shakespeare’s time, becomes a mythopoetic key that unlocks the welter of absurd power plays which underpin our contemporary moment. On another level, the world simply is as it is. Drennen’s paintings can unpack both ways: as metaphoric tragedies and as literal farce.

Craig Drennen is a painter based in Atlanta and a 2018 Guggenheim Fellow. His recent solo exhibitions include “Old Athenian &” at Stove Works in Chattanooga, TN and “First Acts” at Atlanta Contemporary Art Center in Atlanta, GA. He has been an artist in residence at Yaddo, MacDowell, the Triangle Arts Foundation, DNA Provincetown, and Skowhegan. His work has been reviewed in Art in America, Artforum, and the New York Times. Drennen served as dean at the Skowhegan School of Painting & Sculpture in Skowhegan, Maine for four years. He teaches at Georgia State University in Atlanta and manages THE END Project Space. Since 2008 he has organized his studio practice around Shakespeare’s “Timon of Athens”.