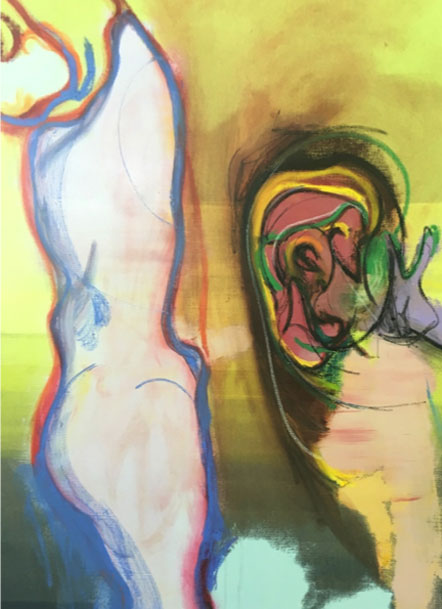 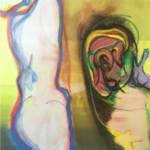 Regen Projects is pleased to present an exhibition of new paintings by Berlin-based artist Daniel Richter. Entitled “wild thing”, Richter brings together recent explorations in painting that present a radical shift in pictorial language from his previous works. The results are striking and colorful images that challenge and expand the possibilities of the medium. This is the artist’s third solo show at the gallery.

Considered to be one of the most influential painters of his generation, Richter’s work continues the lineage of post-war German painting that includes artists such as Werner Büttner, Martin Kippenberger, and Albert Oehlen. In the 1990s he gained critical acclaim for his colorful abstract paintings and large-scale, psychedelic figurative works. Combining elements of pure formal abstraction with representational images culled from popular culture and the media, his striking compositions pushed the limits of his chosen medium and posited a new approach to the genre of contemporary history painting.

The works in the exhibition adhere to a new methodology created by the artist that upends the narrative structures associated with his earlier paintings. Prioritizing the palette knife above the paintbrush, Richter’s works render the process by which they were made visible to the viewer. The multi-layered compositions blur the line between figuration and abstraction. A myriad of painterly techniques ranging from thin washes reminiscent of graffiti to broad swathes of color combine to create theatrical stages featuring transparent ghost-like figures opaquely rendered on the surface of the canvas.

In her catalogue essay for Richter’s recent exhibition at the Schirn Kunsthalle in Frankfurt, Germany, art historian Eva Meyer-Hermann notes that ‘The tone of the new pictures is loud, almost aggressive. Figuration has been fragmented in favor of emotional moments. Moreover, parts of the bodies, which in any case are fragmented, are outlined expressively with black lines of crayon. The lines are clearly rapid, sudden, and even abrupt, always in danger of becoming too dense and too strong and thus destroying the flexibility of the subtle interplay between the surfaces and bringing it to an unexpected halt. Painting itself becomes a risk factor.’

Daniel Richter (b. 1962 Eutin, Germany) studied at the Hochschule für bildende Künste in Hamburg, Germany. He lives and works in Berlin, Germany.

In 2010, Richter designed a series of stage sets for the Salzburg Opera’s production of “Lulu” in conjunction with his solo exhibition at the Rupertinum Museum of Modern Art, Salzburg, Austria. In 1998 he was the recipient of the prestigious Otto Dix Award, and in 2002 the Hamburger Bahnhof in Berlin, Germany awarded him the Preis der Nationalgalerie.